Blog : To trip it up and down

To trip it up and down

So I took a trip to Michigan a few weeks ago, mainly to attend the Smithee Awards (which I’ll cover in another post), but I also got to see some family and friends.

I drove there, staying with my mother who lives in the Detroit area. Generally, the quickest way to get from home to Detroit by car is to cut through Ontario – crossing over in the Buffalo/Niagara region. Doing so had been my plan, in fact. Unfortunately, I forgot to bring my passport on the trip, which I would have needed to get back into the U.S. I was in New York State by the time I realized this, and didn’t want to drive home to get it, as that would have added at least 2.5 hours to the trip. I resolved to drive through Ohio, which adds time in both directions, but less than backtracking would have.

Driving across New York on the thruway, I encountered some folks with a rather public display of grief. 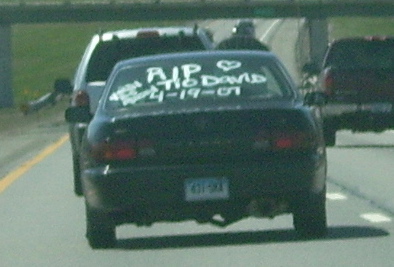 I guess they wanted to pay tribute, so here’s some internet notoriety for their tio. The unreadable part on the left says “You’ll be missed!”

I also saw by the side of the road in NY (but couldn’t have gotten a picture of) a large bird that looked like a peacock (or peahen). At first I thought it might be a wild turkey, but it was the wrong shape. It was shaped like a pheasant, but was much too big to be one. I was told later that, at least in Michigan, there are wild peafowl who exist because of escaped pets breeding in the wild. I hadn’t known anyone kept them as pets.

My mom was babysitting my 2-year-old nephew for the weekend, so I got to hear him saying things like “I have an idea,” which he said repeatedly. When asked what his idea was, though, he usually was mum or indicated the dog. I guess he’s still developing his ideas.

On the day of the Smithees, while I was in Ann Arbor, I ended up parking near the Frieze Building, or what’s left of it. This is a building on the U of M campus that used to house the Program in Film and Video Studies when I was a student (now renamed the Department of Screen Arts and Cultures), and in which I worked for 3 years in the camera and editing checkout facility. The FB is now being torn down to put up a new building called “North Quad” (the U already has the other 3 cardinal direction quads), which will be part dorm and part academic space.

Most of the Frieze has been demolished, but some is still standing, and I got pictures. 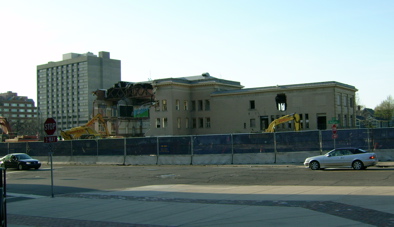 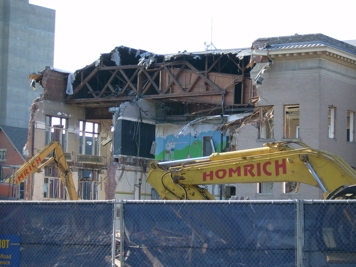 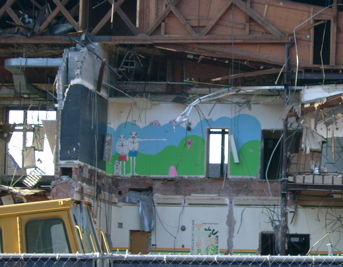 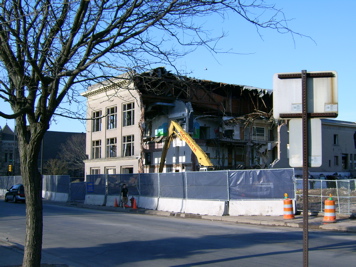 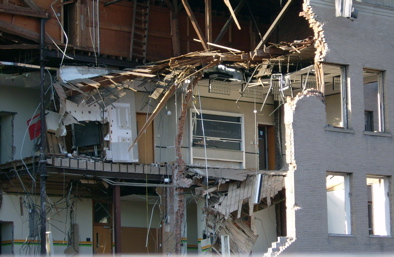 Gone is “Frieze Media,” where I worked. Gone are the classrooms in which I learned how to shoot video. Gone is the Trueblood Theater, where I worked early in college as a props person. Gone also is the freight elevator we would use to bring furniture up to the theater from the basement storage – the elevator emerging through the stage by pushing up a section of the wood floor. Gone is the old abandoned TV studio that the elevator would pass. I do have a lot of memories of the building, and apparently I’m not the only one. Someone appears to have written on a chalkboard when you could still get into the place: 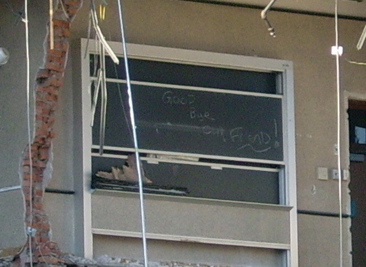 There wasn’t much else too notable about the trip. Look for Smithee news in the next post.