Blog : Where are we going?!

Where are we going?!

Well, I went to Section 10 of the M-M Trail a couple of weeks ago, and it is a very pretty hike. Unlike other hikes I’ve done in the area, it does not have great views (there’s only one place where you can sort of see a view through the trees), but the first bit of this section is a rocky forested area with a stream flowing and falling among the rocks.

I took a few pictures, but they didn’t turn out great. Part of the problem was patches of sun coming through the tree cover, which created a very high-contrast environment. That’s the kind of thing that film is much better than CCD image sensors at capturing.

Here is a picture of the stream soon after I entered the trail section: 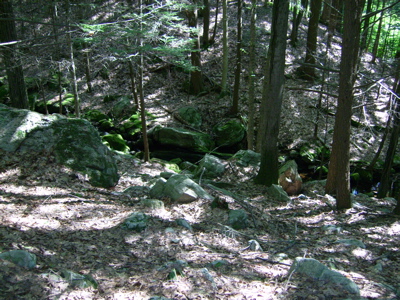 After I went further into the woods, I came upon a waterfall: 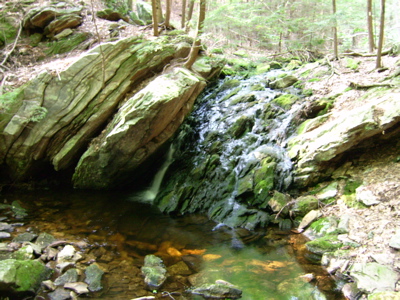 From this point the path goes upstream right next to the water for a while. Eventually, you have to cross the stream, and when I did, I saw something fall from the bank that I thought was a leaf. However, it then leaped a few times in the water to get out of my way. It turned out to be a little brown frog: 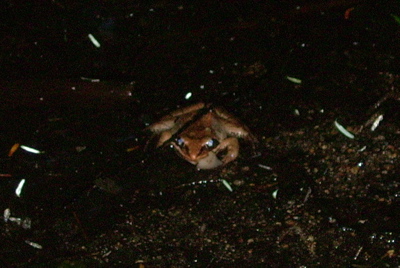 You can’t tell the size from the photo, but it was less than 2 inches long.

I didn’t take any more pictures after that, though there were a few more interesting things I passed, including an old stone wall in the woods which the path follows near and crosses a few times.

Unfortunately, I didn’t get to complete the section that day, as I got to a point where my trail guide book said to cross a street into the woods, but there was a newly constructed house across that street. There were trail marks on a couple of telephone poles along the side of the street, but then they seemed to disappear, so I had no idea where the trail went. So I headed back at that point (fortunately I had already planned to return to my starting point, so that’s where the car was parked). Later, upon checking the online guide, I saw a note from last year that the trail was moved because of the house being built (the print guide was published in 2005).
Ah, well. At least I got to do 3/4 of that section.

BTW, for those confused about the title of this post, the question is from a movie, and the answer, in this case at least, would be “Section 10!”