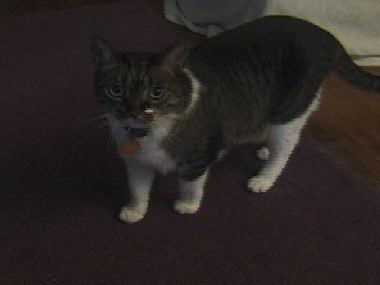 The assessment given by the vet who diagnosed Shark’s cancer was correct. He said that Shark probably had a few weeks, maybe a month, to live. That pronouncement was made on August 13, and the end came on September 12.

I originally got Shark in the summer of 1994. We had stopped by a dancewear store in Ann Arbor during the sidewalk sales that accompany the annual Art Fair (which is actually four different art fairs). There were 2 cats living in the store, but the store was getting ready to move, and the owner told us that in their new location they wouldn’t be able to have cats. The two were litter mates, and his sister had already been promised to someone, but Shark didn’t have a home lined up yet (that was already his name). We agreed to take him, as there was only one cat in our house at the time, who we thought would like the company. It took a couple of days to accomplish this, because he would run away and hide in the store’s attic wall whenever anyone tried to catch him and put him in a carrier.

He was pretty much my cat from the outset. He was only a year or so old when I got him, and wasn’t much interested in sitting on my lap or being picked up. Eventually, though, he did come to like such things after he got a little older and mellower. For several years he would go flying through the air when he’d play, as can be seen on his web page. In later years he got less active, and also somewhat chubby.

Generally he was a healthy cat, with occasional problems such as when he ate a bunch of thread right out of the sewing machine, and I found him with it hanging out of his mouth, still attached to the machine. He was diagnosed with a heart condition a couple of years ago (hypertrophic cardiomyopathy), but medication kept that in check (Shark has always been easy to give pills to). This year he lost weight over several months, which initially was thought to be thyroid-related (and might have been in part), but he turned out to be in worse shape.

He declined slowly, still being affectionate, but hiding more often and losing his appetite despite pain-killing medication. This past Wednesday he hid all day, and by evening was crying when we tried to move him, and then was unable to walk correctly. I took him to the emergency vet clinic late that evening.

It was hard to say goodbye, and I keep being reminded of things I will miss about him. I also have occasionally forgotten that he’s gone in the past couple of days, thinking in the morning that I have to give him medicine, and the like.

To our surprise, when our normal vet found out he’d been euthanized, they sent flowers. I’ll end this post with a picture of that arrangement: 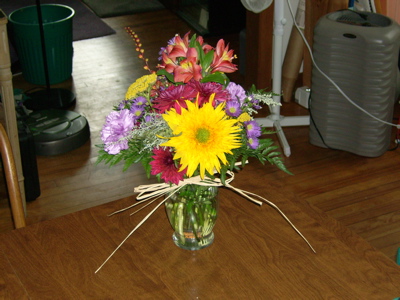