So, once again this year, They Might Be Giants came to play in Northampton. They played last night at the Calvin Theater, and added something special just for this stop on the tour: a horn section!

The concert was in the evening, but earlier, they did a quick acoustic performance at the Northampton Box Office. I thought the box office might have a back room or something that would be used for the performance, but no, the band and crowd were all crammed into the lobby where one purchases tickets. Everyone fit, but it was cramped. John Flansburgh and John Linnell stood at the front of the place, and the drummer and horn players were all up in the display window. I took a few pictures with my cell phone’s camera – here are the ones that aren’t ridiculously blurry: 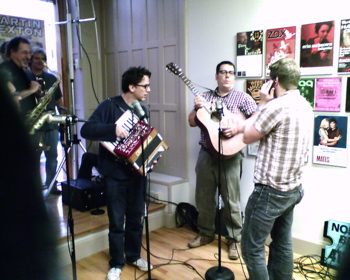 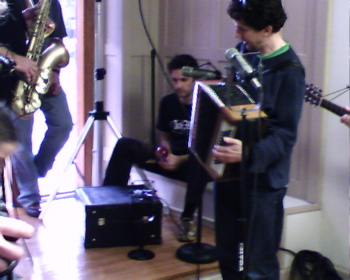 In that second one you can see drummer Marty Beller, not playing any actual drums, but getting ready to drum on the case from John L’s accordion.

As I mentioned, this was a short set, as they played only 3 songs. Those were:

This little concert was put together by our local alt-rock radio station, WRSI 93.9, and it was broadcast live. At some point the audio should be available on their website to listen to, but it isn’t there as of this writing.

It was a fun, though quick, little show, and then the band hightailed it back to the Calvin to prepare for the main show. It had started raining as we were admitted to the box office, and was still raining lightly when I walked outside. The sun was also coming out, though, and there was a rainbow visible, which I got a semi-decent picture of: 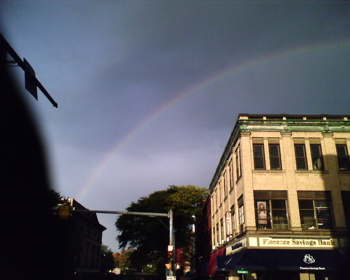 The evening concert was my first time in the Calvin. It’s an old movie palace, and a historic landmark in Noho – pretty nice place. Before going to my seat I visited the merchandise table, and picked up a shirt and an EP. It was assigned seating, so I hadn’t needed to get there early. I was on the main floor, near the center, in the 9th row.

There was an opening band who I hadn’t heard of before: Oppenheimer. As their page states, they’re a duo from Belfast, Ireland who play electro-pop-rock stuff. On stage, Shaun (don’t ask me why someone from Ireland spells his name that way) played a drum set and sang lead vocals, and Rocky alternately played guitar and synths, though when he was playing guitar they had pre-programmed synth lines going on. Their music was not bad, and Shaun impressed me at one point by saying that Twin Peaks was the best TV show ever, and dedicated their next song to Agent Dale Cooper and Laura Palmer.

So once Oppenheimer were done, after some more setting up, TMBG took the stage. For the first song or two it was the usual five piece group (John, John, Marty, Dan Miller, and Danny Weinkaupf). Then they were joined by the “Tricerachops” horns. Unfortunately, the only one of their names I recall is Dan Levine, the trombone player. I don’t recall the names of the sax player (maybe Phil something) or trumpeter. Nevertheless, they were a welcome addition to the performance. I believe this is the first time since my first TMBG concert (in 1994) that I’ve seen them with a horn section (this was my 9th concert, BTW).

Here’s a picture of the stage setup, again taken using my cell phone: 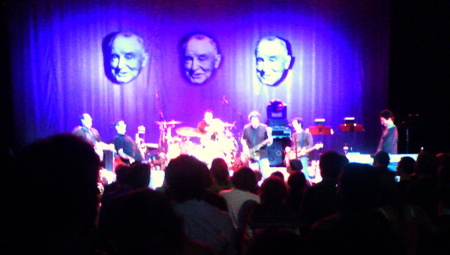 Of course they had to have those William Allen White heads there on the curtain.

Here is the list of songs they played, punctuated with some comments:

Withered Hope sounded awesome with the horns (not surprising, since it has horns on the album).

Those two songs were prefaced by the Johns saying that they were going to play a couple songs that they don’t normally play live, and that having the horns there was making it possible to play them. I was especially excited to hear Metal Detector, as I’ve never heard it live, and it’s a great song.

In the Middle was prefaced by Flans talking about the crosswalk in the center of downtown Noho, which gives walk signs in all directions at the same time, so pedestrians cross wherever they like, including diagonally across the intersection. He said this song was their advice to people who live everywhere else.

Spy always involves a long, sort of improv bit at the end, conducted by Linnell. In this case, Linnell conducted for a while and then Flans took over (mainly indicating when each instrument should start or stop, and often having them only play one note before stopping).

Bee… is another one that has horns on the album, and so sounded great with them here.

They did the phone calls feature last time they were here. In that case, it was Cal Coolidge who called them. This time it was Emily Dickinson (voiced from offstage by Flans). She said that it was very cold and dark under the ground, which inspired her to write a new poem. She thanked the band for visiting the area again, and then recited the poem:

Museum of Idiots is another awesome, awesome horn song.

Ant was introduced by Flans saying that they wrote it many years ago as being about a scary, dystopian future, but these days it just comes off as topical.

At this point they left the stage, and then came back for a first encore.Â  They played:

They left again, and then came back for a second and final encore.

Istanbul started out with a horn duel between the trombone and saxophone, where the audience was to be divided in two to cheer each player on.Â  Flans was speculating on how to divide the audience, when someone in the front row yelled out “Jews!”Â  Flans declined saying that “The overwhelming power of the Jews would crush the competition!”Â  he ended up deciding that the townies would root for the trombone, while the students would root for the saxophone.Â  The actual duel involved each player taking a turn riffing, and then they started playing at each other simultaneously.Â  I got a blurry pic of that: 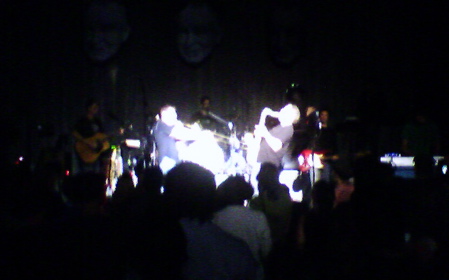 And that song was the end of the concert.Â  I went up to the stage afterward to try and get a setlist, but they had already been given away by the stage crew.Â  I did get to shake Marty’s hand, though, as he was hanging out on stage and greeting the audience.Â  I also saw Dan Miller by the sound board on my way out of the place, and told him it was a great show.Â  He thanked me.

Misc.: Flans referred more than once to those of us in attendance as “Calvinists”.Â  He also announced at one point that the editors of the TMBG wiki were in attendance at the show, and said that we could check the wiki to verify any facts he was unsure of about their songs.