There is good news and there is bad news regarding cats in our household.Â  I’ll give the bad news first, which is also the more recent news.

Arzachel, who was the very old cat of the household, died 2 weeks ago on December 23.Â  He was about 19 years old, which is quite a bit older than most cats live.Â  He had survived many things which could have killed him, but avoided getting cancer (which killed both Shark and Nematode), or kidney failure (very common problem in older cats).Â  We discovered that he had congestive heart failure, and treatment by a cardiology vet ultimately couldn’t do enough for him.Â  The weekend before christmas he was no longer eating, so we took him in to end it. 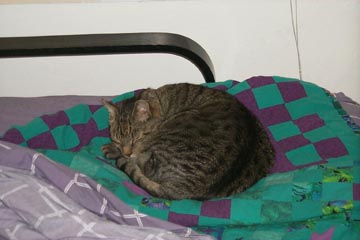 The good news is quite a bit outdated.Â  That is, we have a new cat – one that we got 3 months ago.Â  We didn’t tell anyone for so long because we wanted to settle on a name first, and that took a while.Â  We started with a list of possibilities, and tried them out on her frequently to see what she would respond to.Â  The final choice was made a few weeks ago, so I now present Deodat: 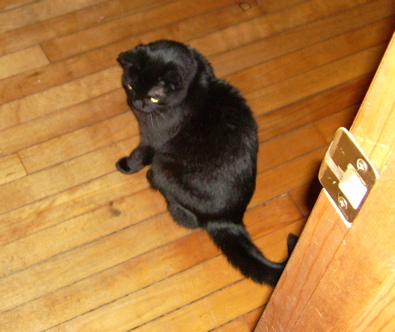 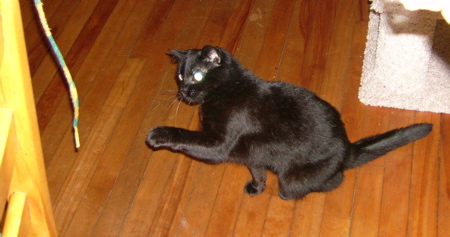 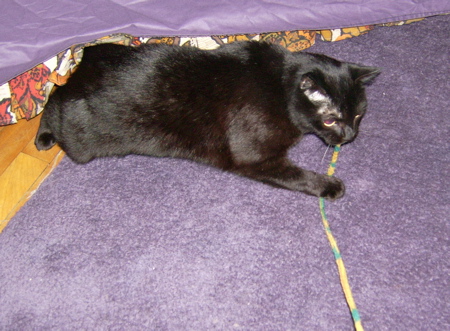 A couple of weeks after Shark died, we started looking for a new cat.Â  We might have waited more, except that Arzachel seemed lonely being the only cat in the house.Â  We got here from a shelter in Springfield, and thought she might be a good companion for him.Â  Unfortunately, she seemed to be afraid of him from the get go, and even after she calmed down and started tolerating his presence, she was never friendly to him.

She is friendly to humans, though, and likes to sit on our laps (especially at the dining table, oddly enough).Â  She also is a big ball of energy, and wants to play much of the time.Â  This is not too surprising, as she’s much younger than our previous cats were (the shelter estimated that she was a bit over 2 years old, making her 2.5 now).Â  She’s a bit weird, though.Â  Besides the lap-sitting at table, she also likes to run past someone who’s headed up the stairs, then grab the top step as she gets there, letting her momentum flop her onto her side on the landing.Â  For the first couple of months she lived here, she would spend a good deal of time under the couch, and in particular would squeeze under there when she see someone coming (it took a little while to figure out that she was playing, not hiding in fear).Â  She still goes under there occasionally.

I have yet to put up a web page for her, but I will get around to it at some point.