Blog : Walk softly and snack on a big stick

Walk softly and snack on a big stick

One of the more fun presents I got for Xmas was a package of Giant Pocky.Â  For those not familiar with the Japanese confection known as Pocky, it is crunchy sticks coated in chocolate (or other flavors not shown on the page I linked to – of which there are many).Â  I’m a big fan of Pocky, though don’t eat it all the time because it tends not to be cheap.Â  I’ve tried several flavors, but never the Giant ones, though I believe they were probablyÂ  reviewed by Ms. Boo (though I can’t find a review in her snack review archives).Â  The Giant version are quite a bit bigger than the normal kind; I photographed them here next to an ice-cream truck for comparison:

As you can see, the scale is well above that of a human vehicle.Â  Giant, indeed.

Regular-sized Pocky has the sticks grouped in bags within the box – at least 4 sticks to a bag.Â  These are individually wrapped: 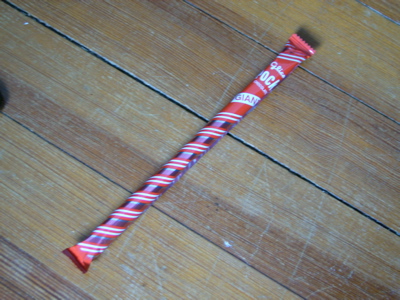 When unwrapped, they look like the usual chocolate kind, only bigger: 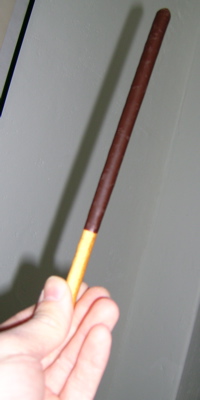 And they taste about the same, except that the biscuity stick taste (kind of like a barely-sweet cracker) dominates the chocolate more, perhaps because the chocolate layer is not as thick in proportion.Â  They’re still tasty, as they use a slightly bitter chocolate on these (as opposed to Men’s Pocky, which is even more bitter).Â  They’re still good, and I’ll definitely eat the whole box (though it will take a while to go through).