Blog : Fall Up and Down

Fall Up and Down

This is a catching up post, which I intended to put up here months ago.Â  Back in October I went for a hike – my longest one to date.Â  I hiked all of section 8 and most of section 7 of the M-M Trail.Â  Total distance was about 10 miles, over lots of rising and falling terrain (including a few small mountains – or big hills by some standards).

I had done both of these sections before, but on separate occasions.Â  To start out, I drove to Skinner state park, and left the car near the Western end of section 7.Â  I had taken my bike with me, and I then biked home.Â  A bit later in the morning, I got a ride to the Eastern end of section 8, and started walking.Â  As we had recently moved into a house with a wood stove, and needed to start making fires in the near future, I collected birch bark as I went (it makes the best tinder).

Just past the first summit (Long Mountain), there is a nice vantage point looking ahead to the West.Â  Above is a picture of Mount Norwattuck seen from that vantage.Â  Here’s a closer view: 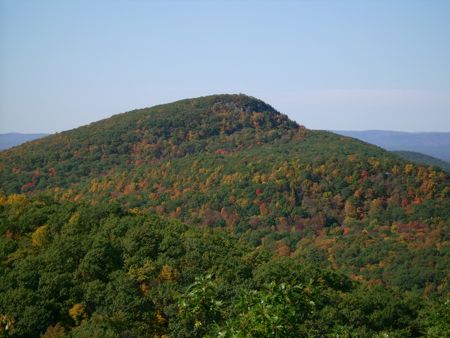 From here I descended a ways, and went through some low areas.Â Â  Eventually the land rises to a ridge, which has a lookout facing back East.Â  Here’s a picture of Long Mountain from there: 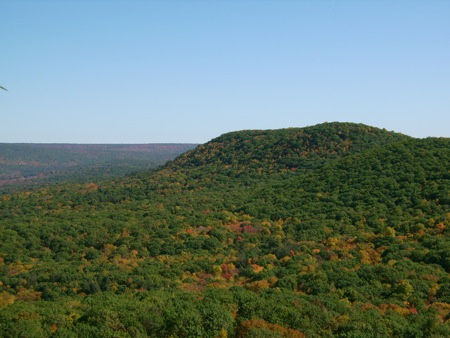 Just after this, one starts to ascend Norwattuck.Â  The top of it is the highest point in this hike.Â  It was a nice place from which to see the Fall colors. 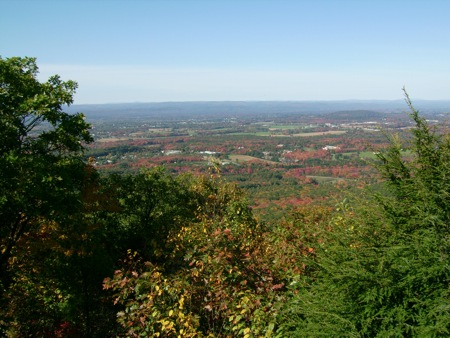 The descent from Norwattuck is fairly long, and drops one off at the Notch visitors’ center.Â  I stopped there to eat lunch.Â  The center was closed, since it was after Columbus Day, so I couldn’t go in and refill on water.Â  Fortunately, I’d been careful, and had only drunk half my supply.

In the Notch, I crossed highway 116 and started section 7, which begins with a steep climb up Bare Mountain.Â  Here is a pic from the top of Bare, looking at the other side of Norwattuck: 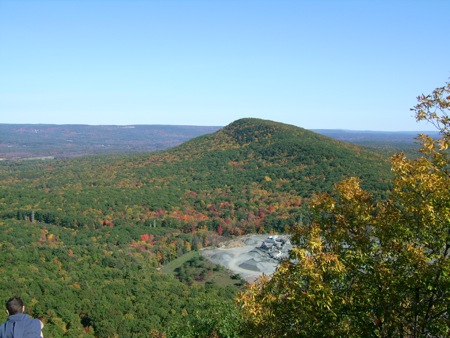 Near the base of Norwattuck, just South of the visitors’ center, is a gravel quarry which you can see a bit of in the picture above.Â  You can also see a random person who is not me (the hair is a dead giveaway).

There is a lot of up and down climbing after Bare Mt., but not much in the way of views.Â  I was getting pretty close to Skinner Park before there were more vistas to look at.Â  From one of those, I took this shot of the Connecticut River, and farmland on the other side in Northampton: 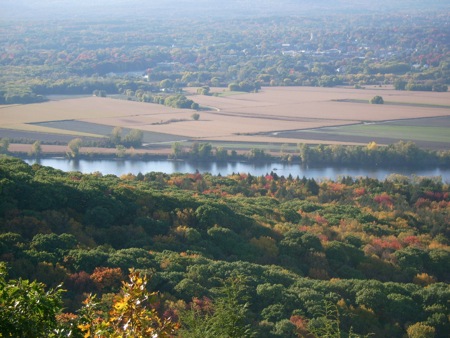 Asthe trail enters Skinner, it goes down to the park’s access road, in Taylor’s Notch.Â  From this point, the trail continues up to the summit of Mt. Holyoke, which is where the road winds its way as well.Â  I was pretty tired out by the time I got to the road, though, so I walked downhill on the road, to the parking area at the bottom where I’d left the car.Â  My total time was about 6 hours, including the stop for lunch.Â  Hopefully more longer hikes will happen this year.