My last full day in Memphis began with the conference, but that finished in the mid-afternoon, so I had a lot of time ahead of me.Â  I first went to the National Civil Rights Museum.Â  It’s located South of downtown, in the old Lorraine Hotel – the site of Dr. Martin Luther King, Jr.’s assassination. 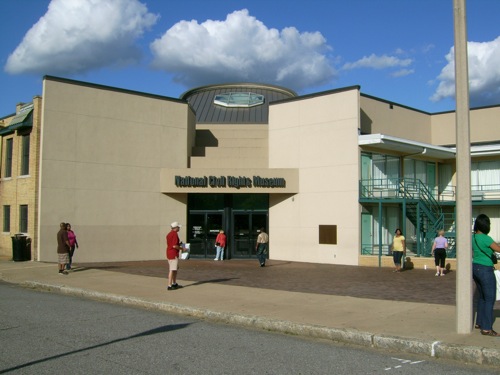 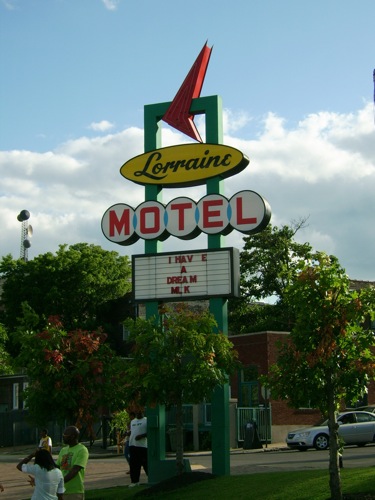 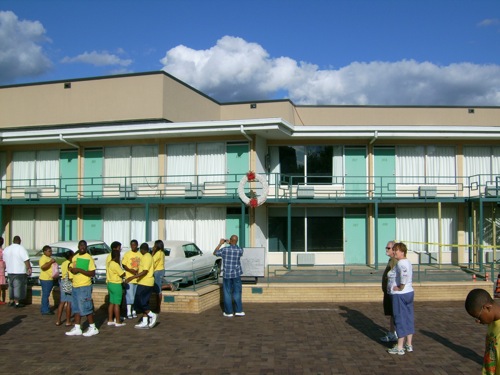 A white wreath hangs on the balcony railing where King was shot: 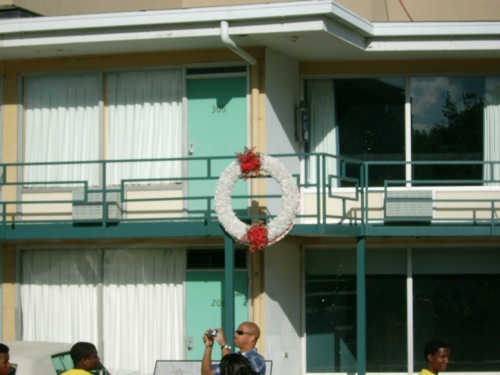 Photography is not allowed inside the museum, so I have no pictures to show of the interior.Â  Much of it is not necessarily worth photographing, as it has a lot of informational text on wall displays, with some images to illustrate.Â  The whole museum is structured so that visitors traverse it in a linear fashion, and are following a timeline of the African-American struggle for civil rights in the U.S.Â  It starts in the days of slavery and progresses forward, but most of the length deals with the events of the 1950’s and ’60’s.

There are certainly some eye-catching exhibits, though, such as a bus from the period, which visitors can walk through, and which has a statue of Rosa Parks sitting in a seat near the front.Â  There’s also a lunch counter mock-up with statues of student protesters sitting at it; a partial, burnt-up bus illustrating the Freedom Rides exhibit; and a garbage truck flanked by statues of striking sanitation workers, wearing “I am a man” signs.Â  The tour of that building finishes with visitors walking by a preserved version of one of the rooms from the time, right by where King was staying, and being able to look out the window onto the spot on the balcony where he was shot.

One then leaves the building, and crosses the street.Â  One goes through this gate (which was slid to the side when I went through – I took this picture after the place closed). 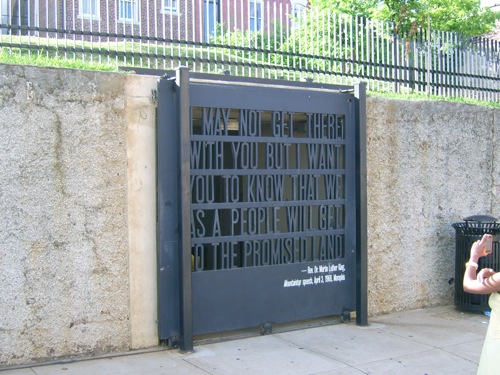 This leads to a tunnel, which goes into the basement of this building: 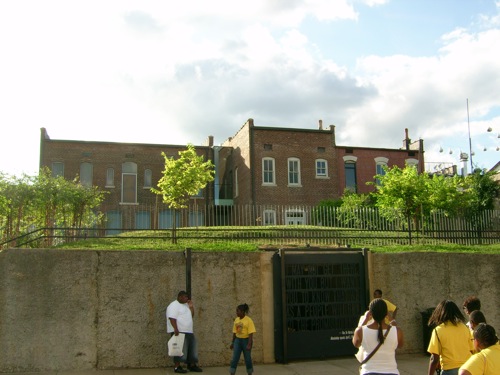 One then ascends to the top floor and goes through an exhibit all about the investigation of the assassination.Â  This includes being able to look at the bathroom from which James Earl Ray fired the shot.Â  The small window in the middle of the picture below is that bathroom window: 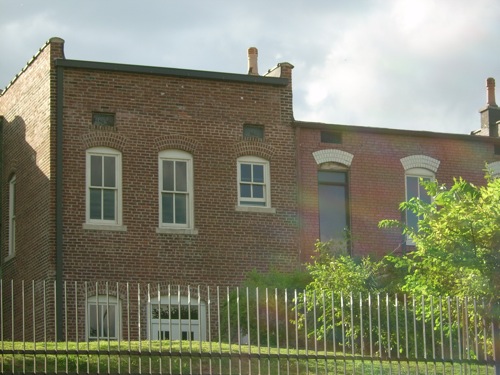 The main floor of the building finishes the museum, with exhibits dealing more broadly with other struggles for rights and equality, and detailing some progress made in Memphis and the nation since the ’60’s.Â  The place was certainly money and time well spent.

After I left the museum, I walked West toward the mighty Mississippi.Â  At one point I got to a stairway that descended to a road, across which was a park by the river.Â  Here’s a picture taken from that stairway: 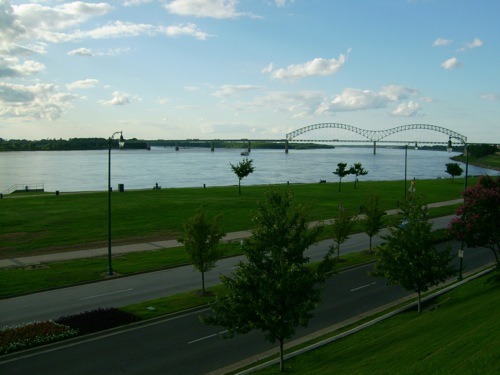 Here are views of the river taken from the riverbank – looking North: 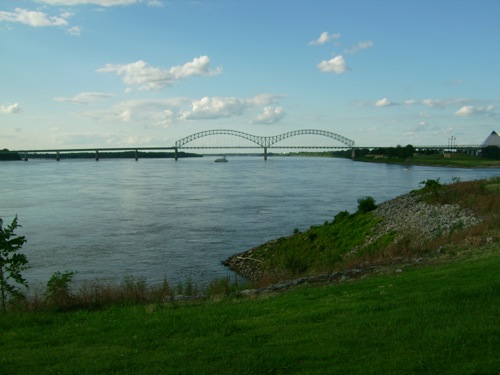 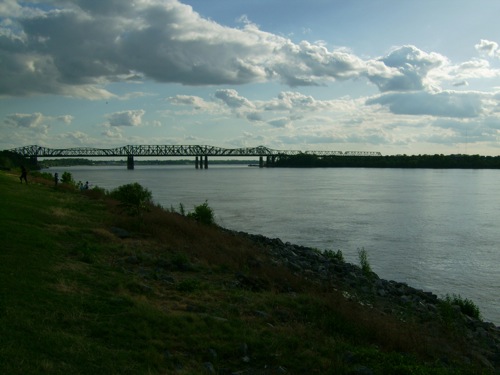 I walked North along the river for a while, which took me back into downtown.Â  I came upon a smaller park on the edge of downtown, and was a bit surprised (though maybe I shouldn’t have been) to see the name of the park: 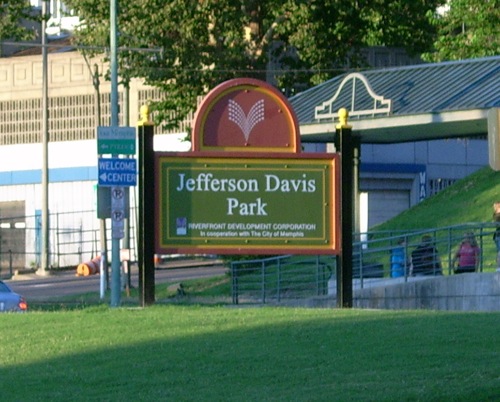 I wouldn’t think too many people would want to commemorate the Confederacy, but then there was a big fight to keep the Confederate flag atop the South Carolina capitol a few years ago.

Soon after that park, I came to a city visitors’ center, which was closed, but had this mosaic egg out front: 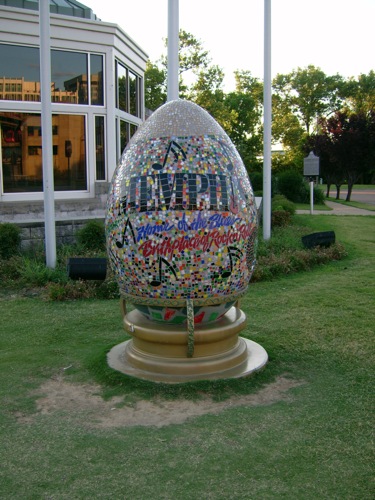 From there I moved away from the river a bit, and headed North up a different street.Â  I encountered this interesting piece of sculpture: 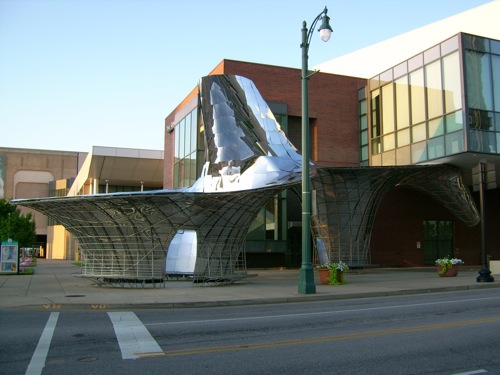 I went inside that large part on the left, which had a bench around the interior. 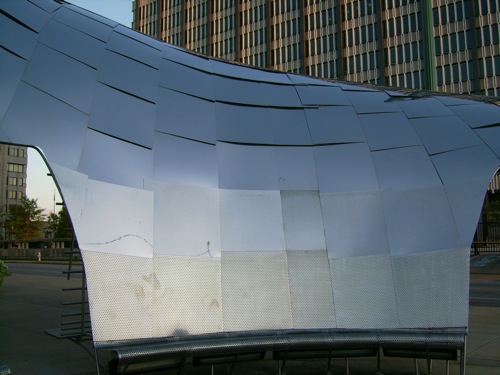 I could look up at the high part: 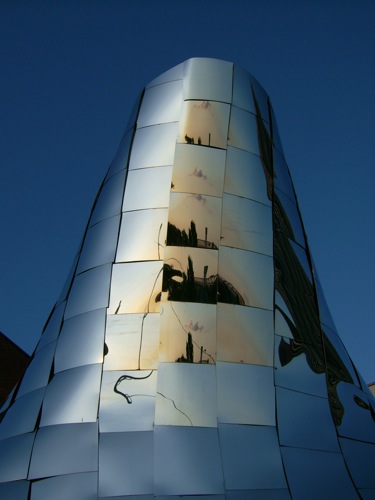 and then I went back outside and looked up through the high part: 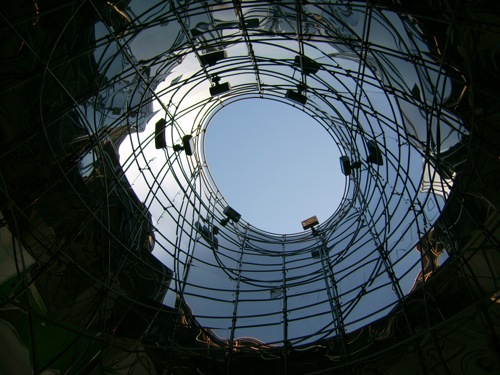 I also took some pictures of the sculpture’s underside: 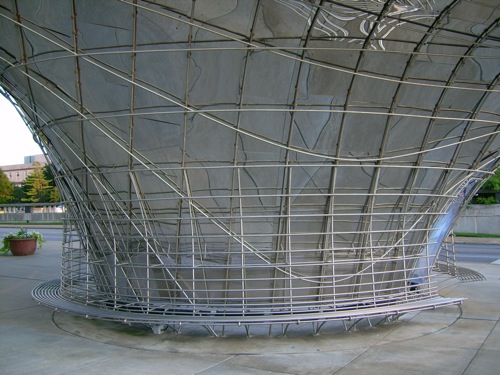 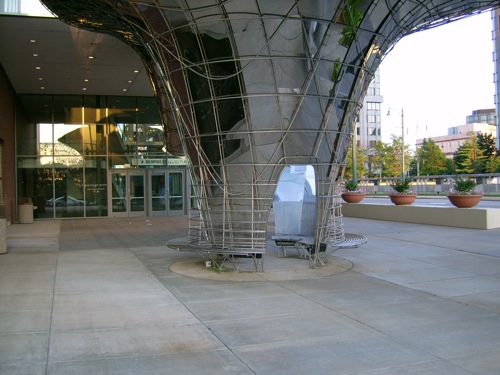 A bit further North is The Pyramid, which is a currently-unused arena: 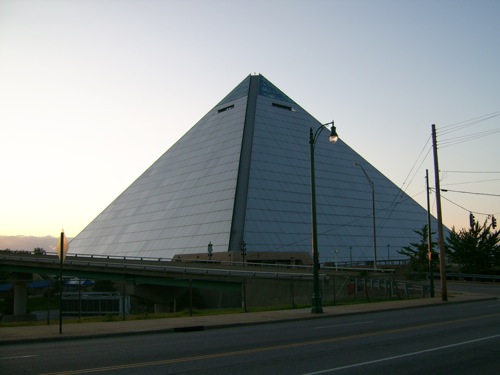 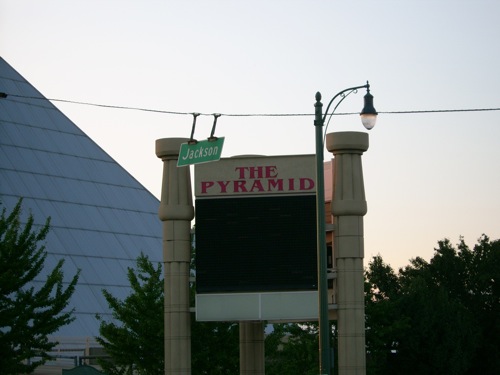 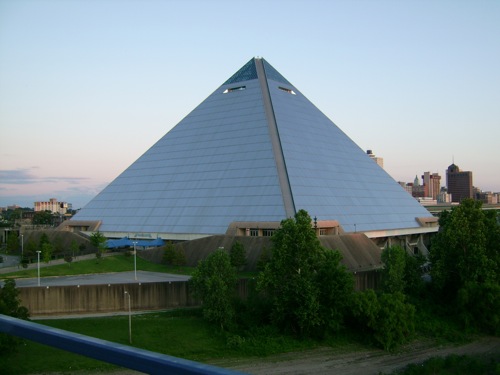 In front of the place is this statue: 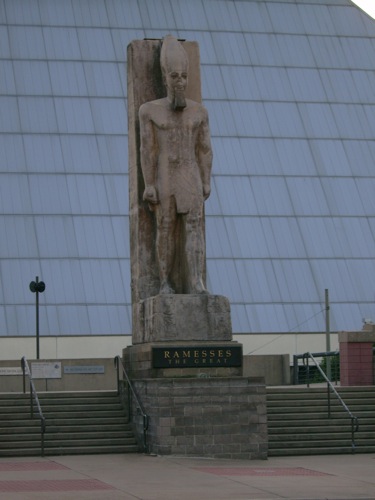 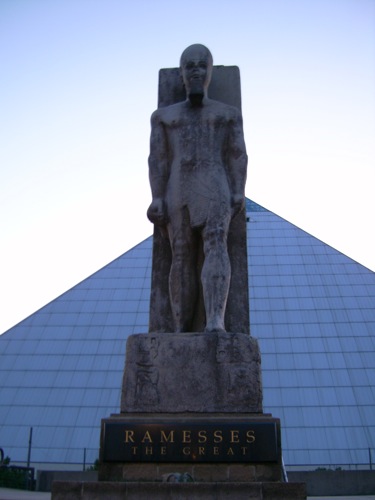 Just past the Pyramid was a bridge over to Mud Island, which has a parks and residences on it.Â  I walked across, taking a couple more pictures of the water – this time of the narrow channel that runs between the Tennessee bank and the island (known as the Wolf River).Â  This is looking South: 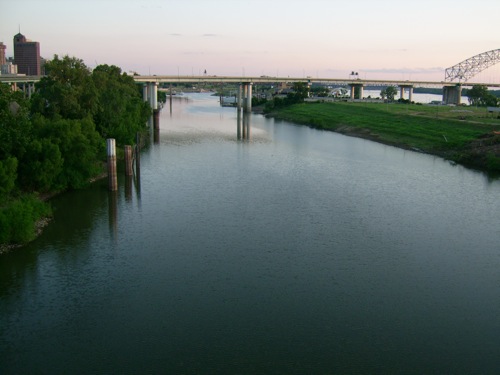 That’s the island to the right, with the Interstate 40 bridge going over it.Â  This is looking North, with ripples cause by a boat heading in to dock: 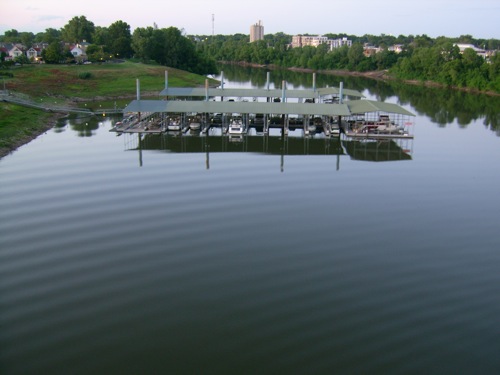 Technically, the ‘island’ is a peninsula.Â  If you look at a map (or satellite photo), it is connected to the mainland at the Northern end.Â  I did venture that far, though.Â  Once I crossed the bridge, I headed across the main road, and into another park, where I could look across the large part of the river, and watch the sun set on the Arkansas side: 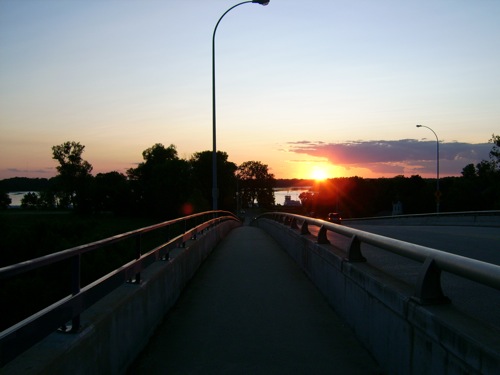 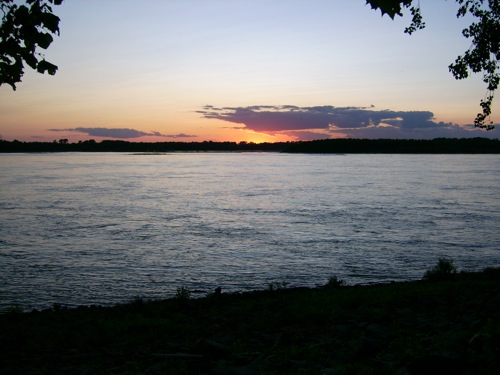 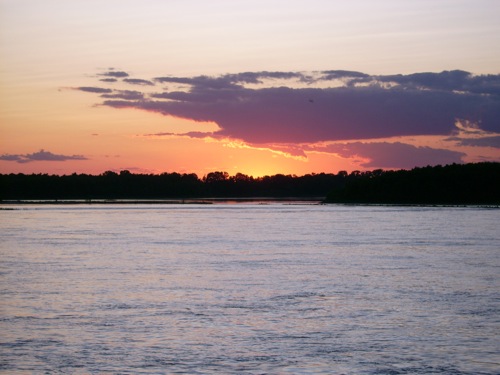 I then headed back the way I’d come to go back to the hotel.Â  On the way, I was passing under I-40, and saw these bears propped against a column: 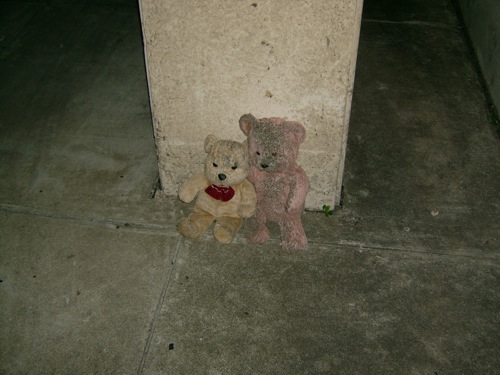 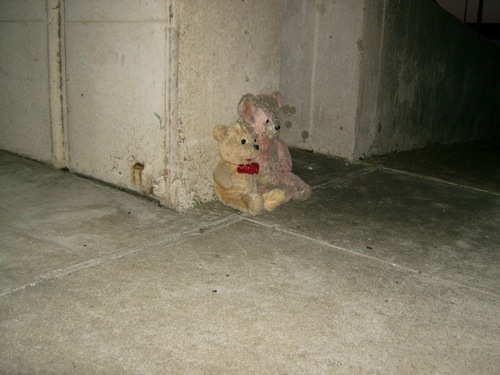 Perhaps they were put there as a memorial to someone?Â  Your guess is as good as mine.