My first training ride for the MS event involved going to visit a spot that I’ve been meaning to hit for a couple of years.Â  That would be Sugarloaf Mountain in Deerfield.Â  I rode North through Hadley, picking up Route 116 and taking it through the town of Sunderland, and then across the river into Deerfield.Â  Here’s a pic I took of the mountain a couple years ago: 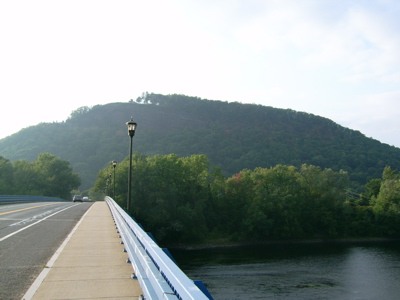 Technically there are 2 peaks: South Sugarloaf and North Sugarloaf.Â  Pictured above is the South peak (seen from the river bridge), which is the one that has a road climbing it.

Having never been up that road before, I didn’t know what to expect.Â  It turned out to be a somewhat steep climb.Â  Thus, I had to stop and rest several times (maybe 7 times before I reached the top).Â  My legs were definitely up to the task, but I’d have to stop after a relatively short stint of riding because I’d be short of breath with my heart pounding.Â  A few minutes’ rest (and some water – I brought plenty) would leave me ready for the next stretch.Â  It had taken me 45 minutes to cover the 12 miles from my house to the mountain – it was another 30 minutes to climb the not-quite-a-mile to the top.

As expected, though, my efforts were rewarded by the view.Â  There’s an observation tower at the summit, as you can see here: 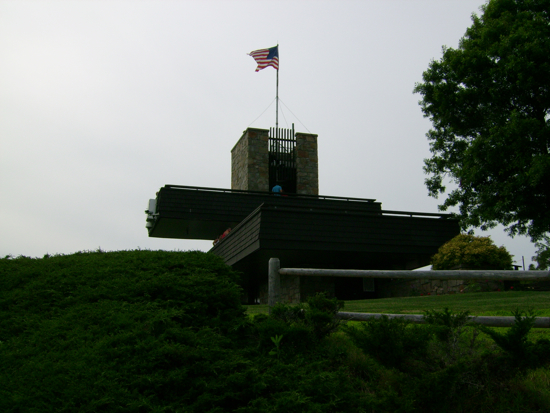 I climbed up, and took a look.Â  Here’s the view looking Northeast, toward Montague: 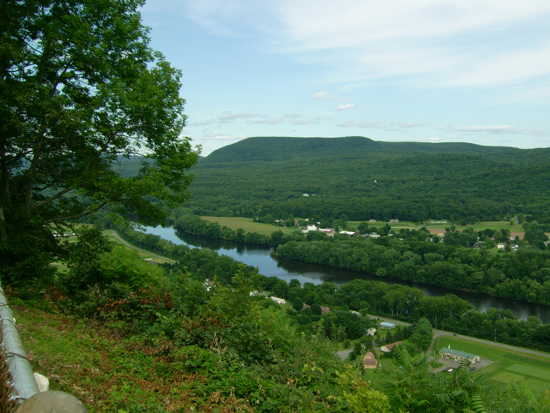 This is East into Sunderland center:

South, down the river: 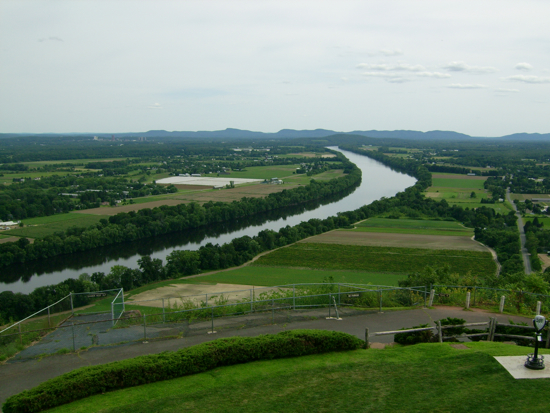 Southwest, into Whately and Hatfield:

And West, into Deerfield: 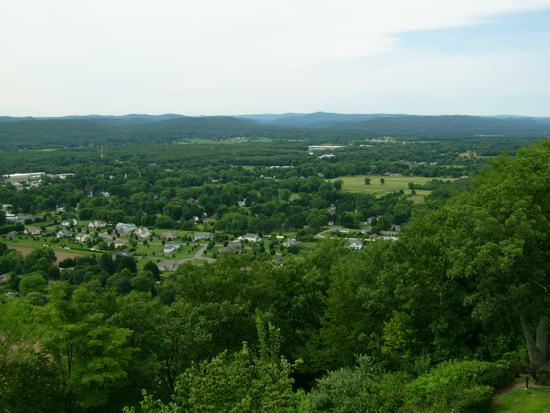 Looking South, one can see some of the other mountains I’ve been on.Â  Here are Mt. Norwattuck (left) and Bare Mountain (right), which are near our house:

How close are they?Â  I could walk from home to the summit of Bare Mt. in about an hour if I wanted to (in fact, I should do that sometime).

Here’s Mt. Holyoke on the right (look for more about it in a future post):

Then this is the Mt. Tom Range, located on the other side of the river (West side, same as Sugarloaf):

Coming up Sugarloaf, there is a point where the road splits, so that there’s a loop going around the summit.Â  So heading back down, I was initially on a section of road I hadn’t travelled on the way up.Â  Some of that proved to be scarily steep, so I played it safe and walked my bike to the end of the steep part, and around the sharp turn at the end of it.Â  Riding the rest of the way down was fast, but not uncontrollably so.Â  My total time down the mountain was only about 6 or 7 minutes.

From there I headed West and picked up Route 5, which I took down into Northampton.Â  I then picked up the Norwattuck Rail Trail, crossed the river and headed back through Hadley to home.Â  Total distance: 30 miles.

Next: The Big Reservoir