This past Saturday I went for my final training ride.Â  I set out for the City of Westfield, which I’ve never been in, except for traveling through it on the Mass Pike.

I started out heading over the river into Northampton, and then went South on route 5 so I could pick up the Manhan Rail Trail, and ride it through most of Easthampton. I had heard earlier this year that part of the trail collapsed when a sinkhole opened up, but I didn’t know exactly where that occurred, or how large it was.Â  I discovered it soon after getting on the trail, as it’s near the Eastern end: 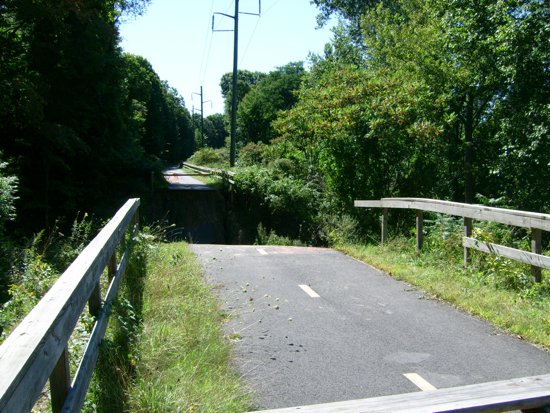 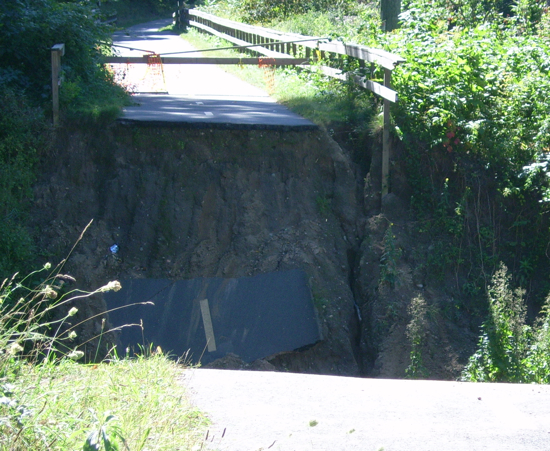 Needless to say, I wasn’t going to be crossing that gap (it was a good 50 feet across).Â  I peered over the edge and saw a bit of construction equipment.Â  Apparently efforts have recently begin to start fixing the hole and trail.Â  As I was taking pictures, a cyclist showed up below, walking his bike through the trench, then coming up a sort of construction road and making his way through the woods over to the part of the trail I was on.Â  He said that was the first (and might be the last) time he’d attempted crossing through that way, but he’d just gotten tired of going the long way around.Â  He also mentioned that the original collapse was not quite as wide – the repair efforts have widened the gap somewhat.

I ended up going back to the beginning of the trail, but at least got a nice view of the Connecticut River oxbow before leaving the gap: 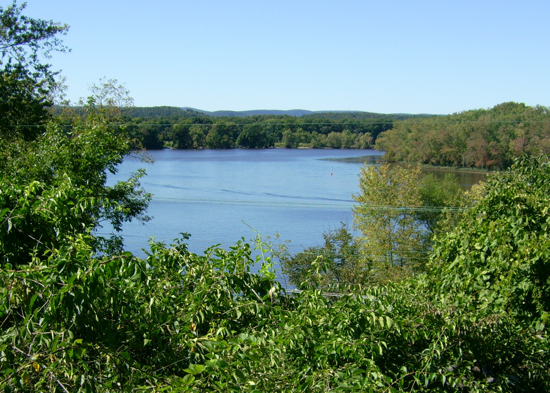 I headed down nearby East St., which parallels the trail for a while, and then I took a side street back to the trail at a point past the collapse.Â  I continued on toward downtown. 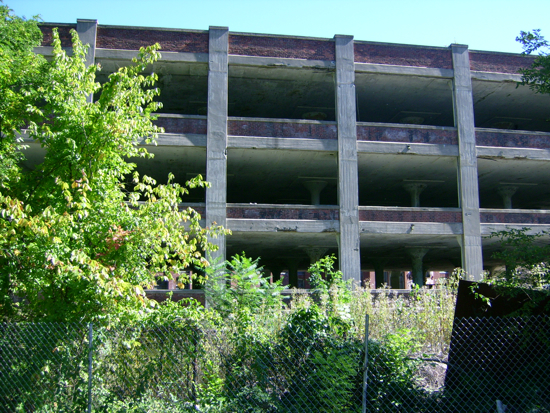 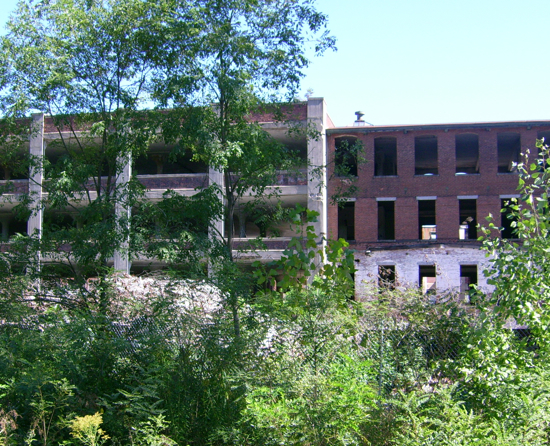 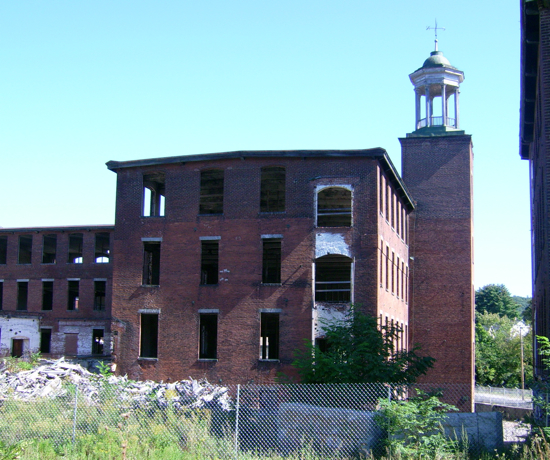 I kept on the Manhan trail until its end near the West edge of town.Â  From there I hopped onto Route 10, and headed into Southampton, a town I had never been in before.Â  Just before hitting the town line, I saw this view of mountains to the West: 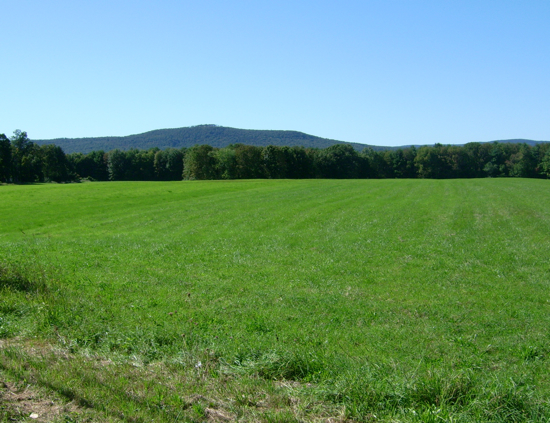 Southampton is a pretty town – there are some little shopping centers, and a big Harley-Davidson dealership, along 10, but most of it is pretty rural.

The Manhan River, which flows through Easthampton, goes first through Southampton.Â  I took a couple of pics of it where it crossed Route 10: 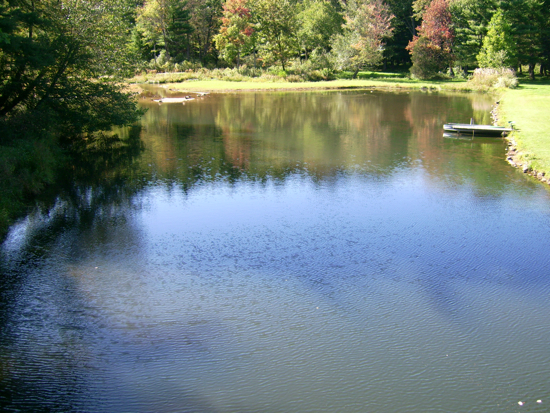 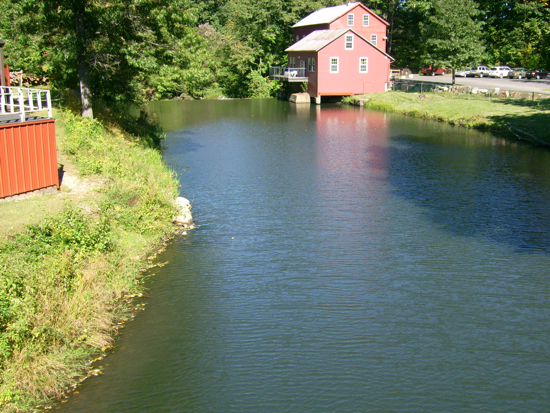 A heron flew up soon after I got to the river crossing.Â  It landed at first near that left-hand red building, but when I tried to photograph it, it flew across the road to get farther away.Â  I managed to spin around a get a pic of it in flight, traveling away from me: 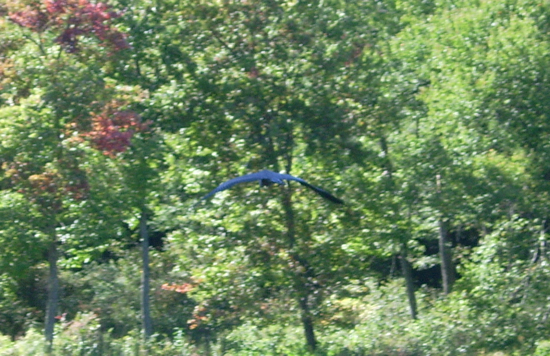 And then I captured it from afar, along with some ducks and geese: 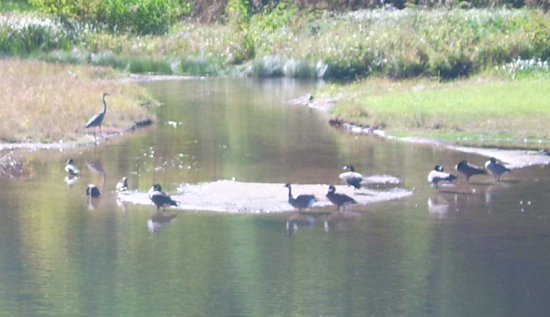 Not too long after that, I was heading up a gradual hill, and came upon this: 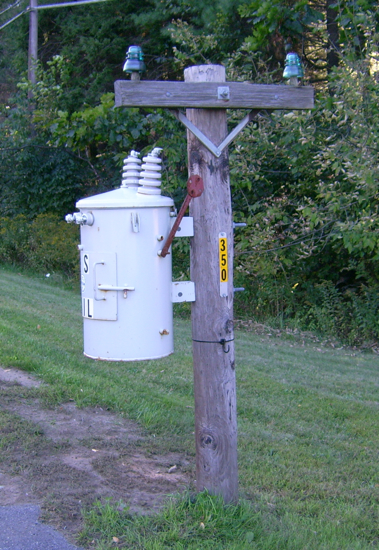 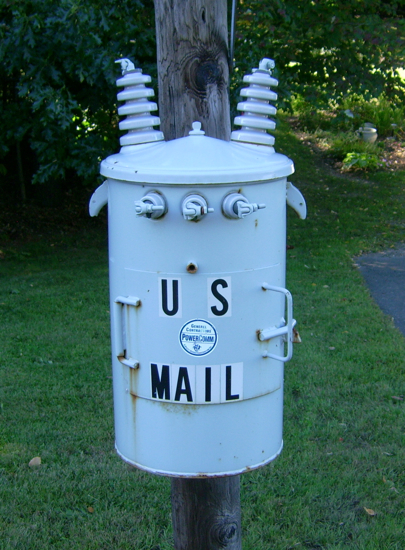 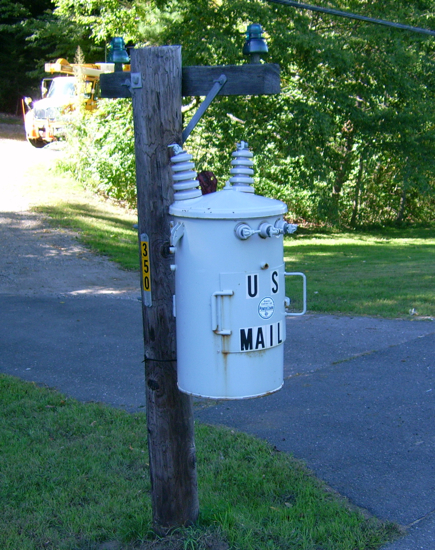 (I think the owner works for one of the local electric companies, as you can see a utility truck parked there.)

A bit further along I passed into Westfield, and then Route 202 joined with Route 10.Â  The combined highway heads South for a couple more miles before passing the Pike (aka Interstate 90) and then the road descends a hill into downtown Westfield.Â  There are 2 bridges that would normally carry traffic over the Westfield river into downtown, but one of them is under construction.Â  Here’s the one that is open: 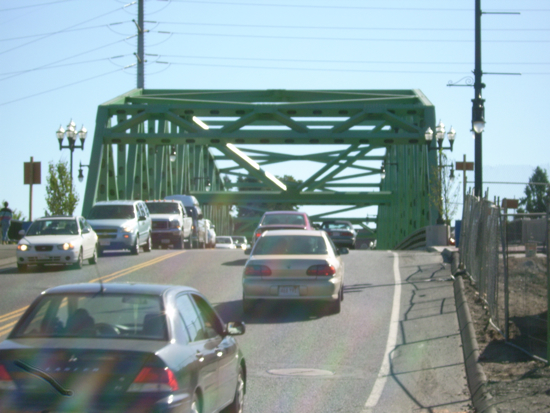 And here’s a view from that bridge of the other one: 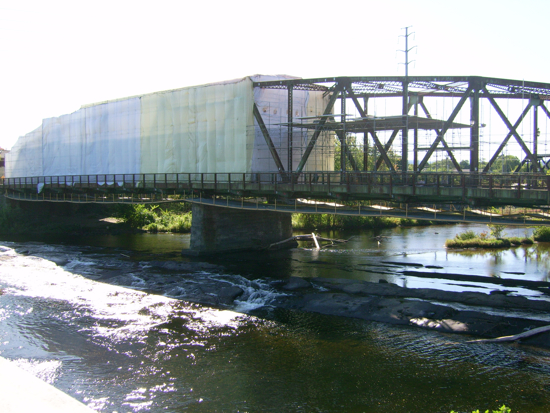 Here are various pictures taken in and around the downtown: 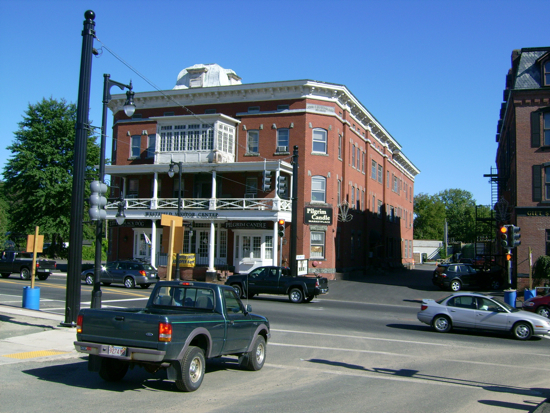 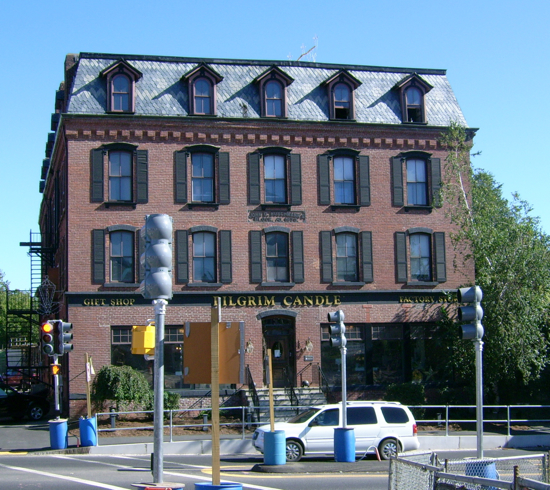 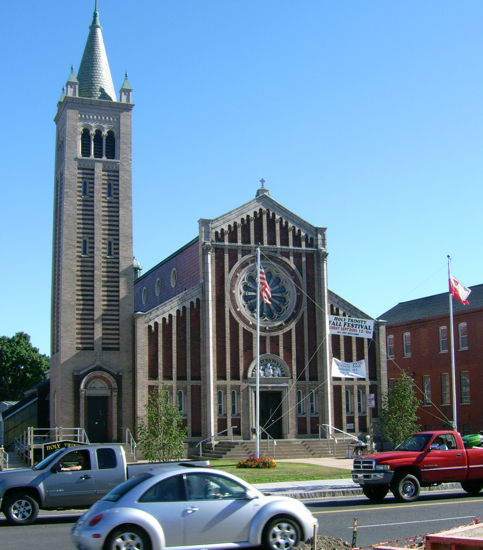 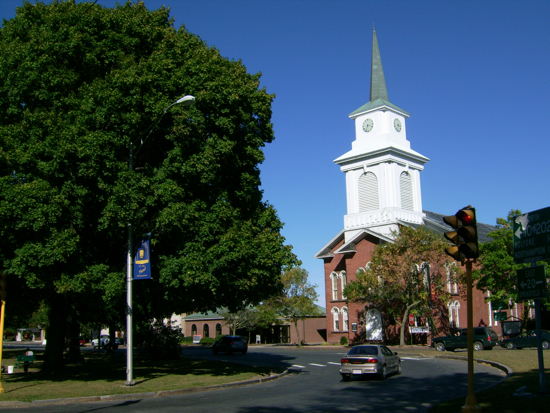 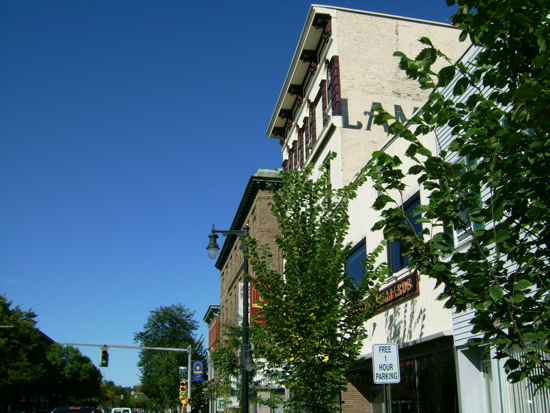 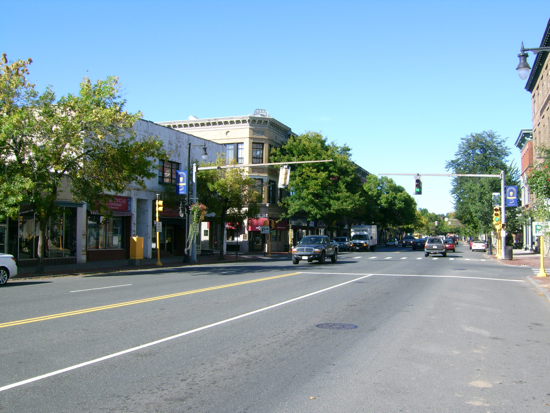 Here’s the Westfield River again, looking the other way (downriver, East) from the previous view: 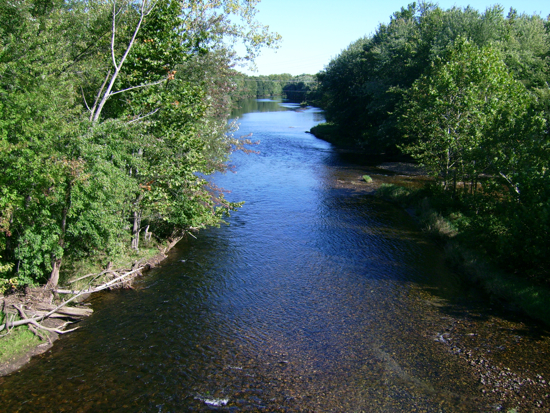 I headed back North, up the hill and past 90 again, and noticed the airport off to the right side:

That would be Barnes Municipal Airport, which also functions as an air National Guard base.

Just after I got back into Southampton, I saw this great view of Mt. Tom off to the Northeast: 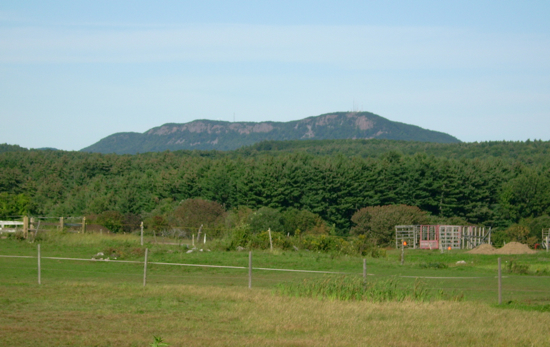 That’s technically the whole Mt. Tom range, but Tom itself is the peak on the right (if you look closely, you can see the many antennae on the peak).

I stopped off at a little grocery on the way home and got an apple to keep my energy up, but I didn’t have a huge amount of time, so didn’t want to take too long to eat.Â  I skipped the Manhan trail on the way back, and just took Route 10 all the way to downtown Northampton, then Route 9 back across the Connecticut to Hadley.Â  I made the whole round trip in just a hair under 5 hours.Â  Total distance: 48 miles.

I’m definitely ready for the big ride this coming Saturday.Â  More details in my next post.