Blog : From Riverbank, under Roadway, to Reservoir

From Riverbank, under Roadway, to Reservoir

I previously posted about my bike trip over the July 4th long weekend.  On the Monday of that weekend, I went for an extended hike.  This was another hike of parts of the Metacomet-Monadnock trail – I covered sections 3 and 4.

As with other one-way hikes, I brought my bike along on the back of the car, parked at the end of section 4, and then biked around to the beginning of section 3.

Section 3 begins on the Northern bank of the Westfield River at a point in West Springfield (but very close to the Westfield line).  The river flows behind a bunch of businesses on US-20, and I locked up my bike in a parking lot there, then took a very short path down to the river to get some pics.  Here’s the view upriver to the West: 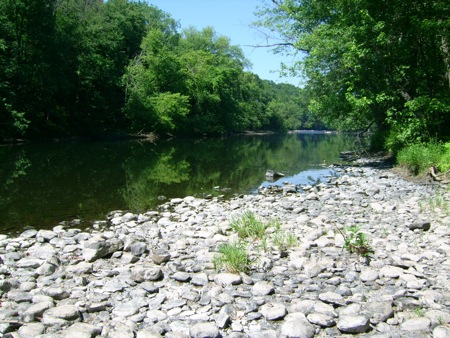 And downriver to the East: 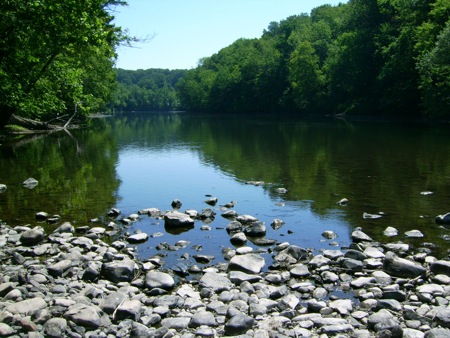 From there, I went back up and crossed Route 20, to begin the hike in earnest.  This involved a bit of walking on side streets until I got to the spot where the trail actually goes into the woods.

Once that happened, I spent nearly half a mile walking near a quarry, partially using its dirt access roads.  Then, the trail went off into deeper woods near a marshy area.  Just a little ways into those woods, I came across this structure: 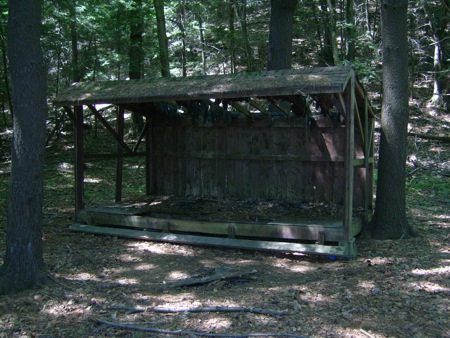 It was very run-down, so I don’t think it gets used any more.  Who knows what it was used for in the past – maybe camping for hunters?  (there is a sportsman’s club of some kind near the quarry)

Just after that, I came across some large and weird fungal growths: 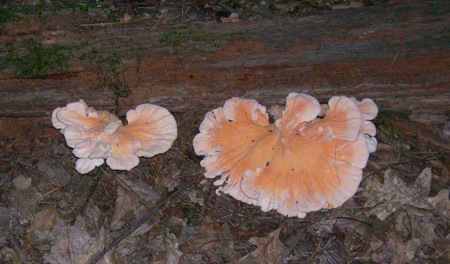 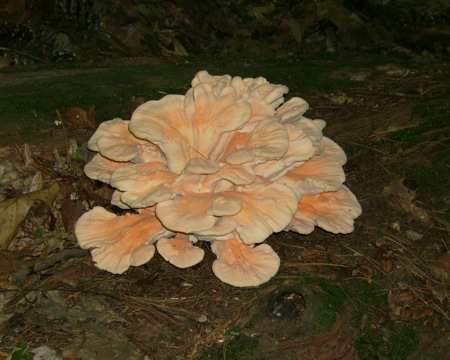 There’s nothing in the pictures for size reference, but each of these big ones was a good 8 inches in diameter.

The trail started skirting the edge of the marsh, so I started getting pestered by mosquitoes.  I also got a few more pictures: 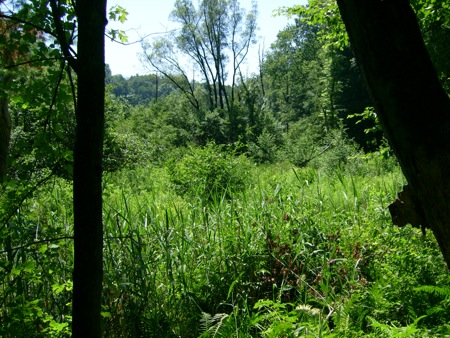 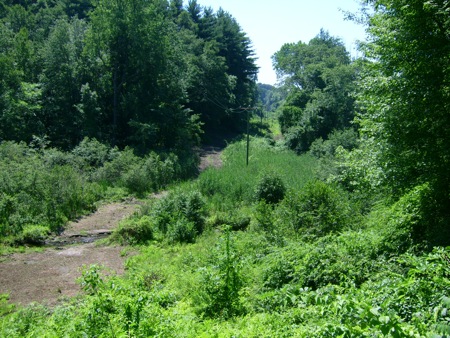 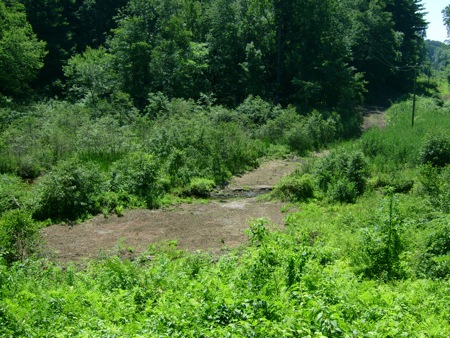 That lower area wasn’t completely wetland, I think, because there’s a sort-of road there, which is probably for access to the power lines that ran overhead.

Lots more traipsing through woods followed that area, without much to photograph, but I did come across an open area where a tall tree had split: 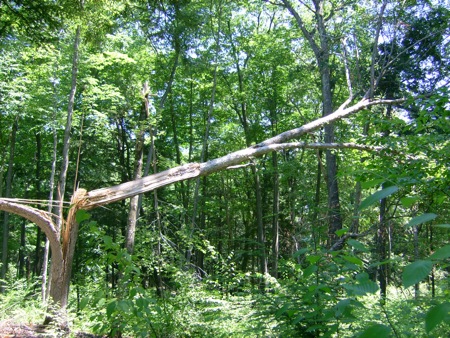 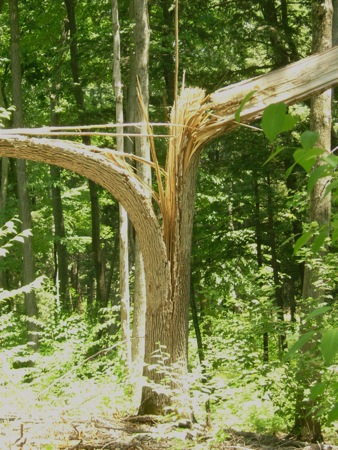 Not sure what caused it.

Eventually, section 3 comes out of the woods by the Massachusetts Turnpike.  At that point, one has to walk West alongside the pike (and a bit downhill), until you come to an underpass for an old quarry road.  Apparently, a number of people have been here – and they’ve left their marks.  Here is the underpass before I went through: 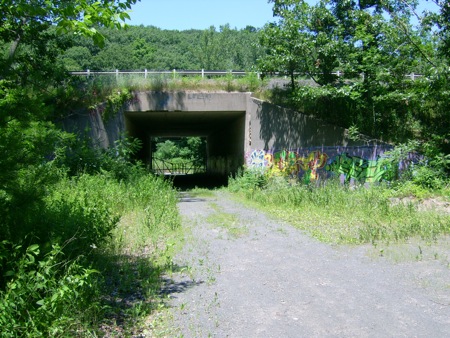 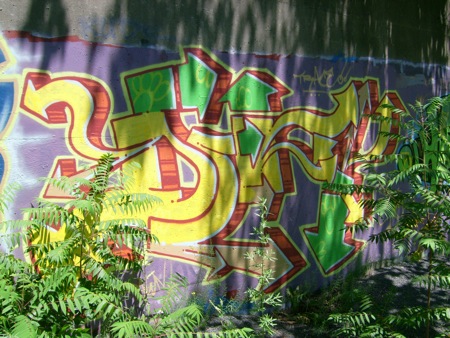 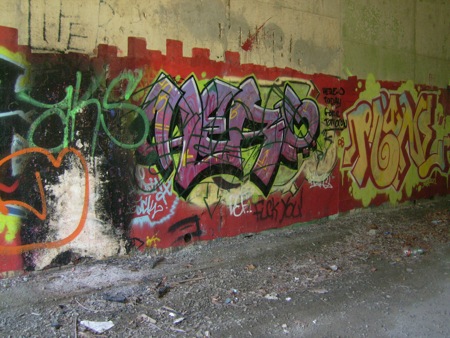 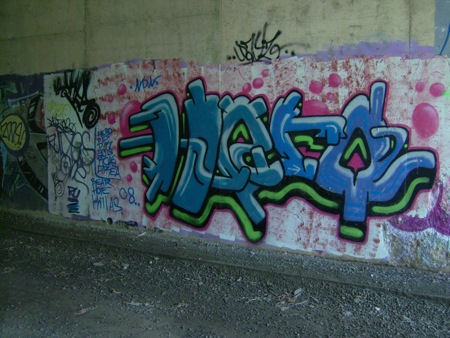 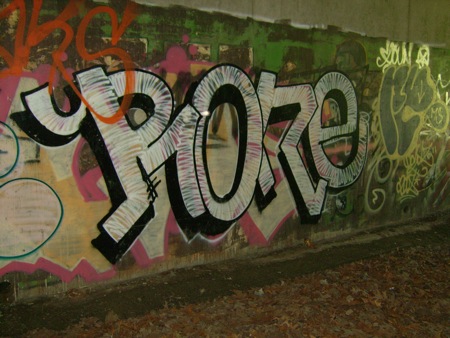 At the far end of the tunnel is a gate you have to climb through: 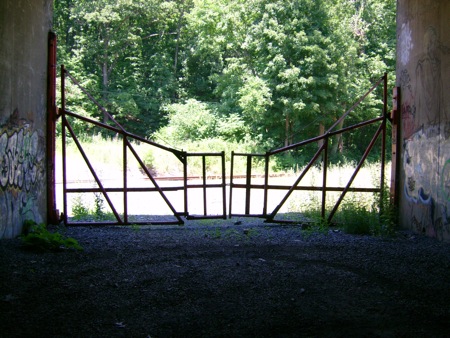 Here it is from the other side: 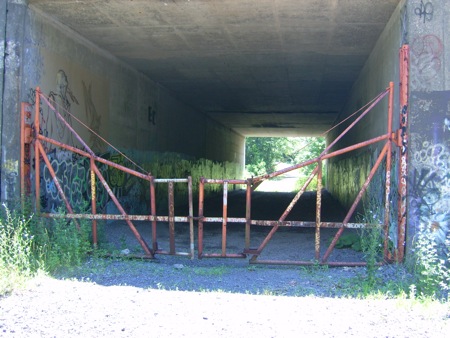 On the far side there are railroad tracks coming by at an angle, which also go under the Pike:

And a bunch more graffiti – these being focused on flowers! 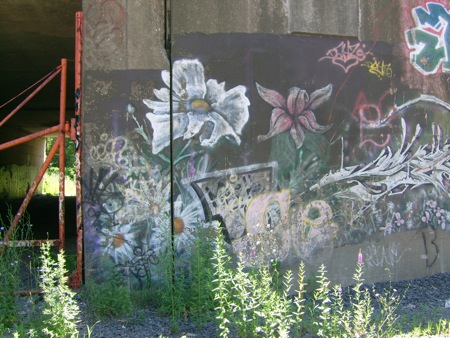 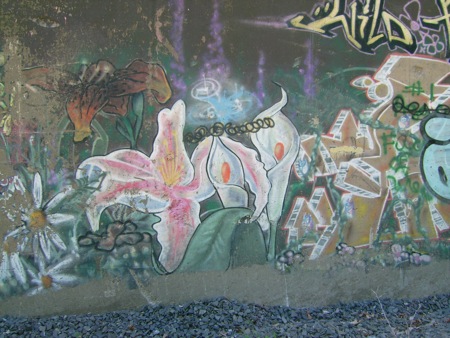 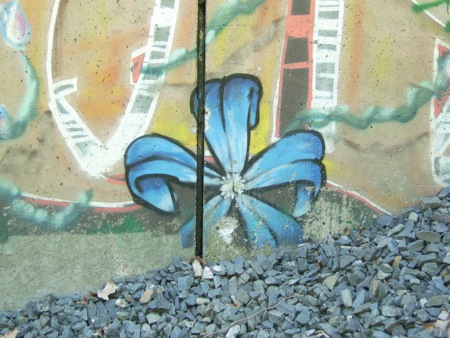 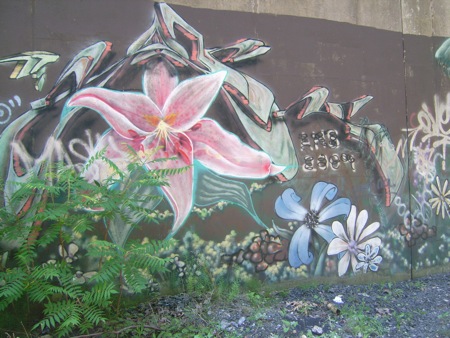 Perhaps someone wanted to help Nature reassert itself on all this concrete in its midst.   🙂

Once I crossed the train tracks, I was at the end of section 3.  I sat down and ate the lunch I’d brought.  It was a very hot day (temp in the 90’s) so I was trying to make my 2 bottles of water last.  Fortunately, I’d packed a nice, juicy peach, and didn’t need to drink so much with my food.  (a peach has never tasted so good)

Having eaten, I commenced section 4.  It differs from section 3 in being on higher ground, so even though it’s also very wooded, there are views to be seen.  Also, there are old communication towers: 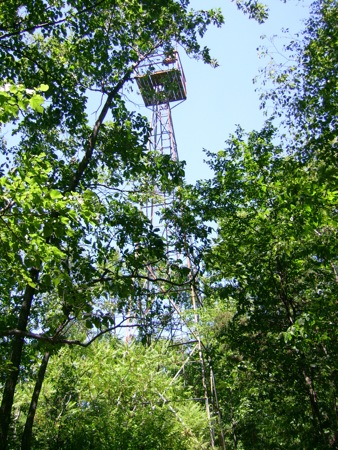 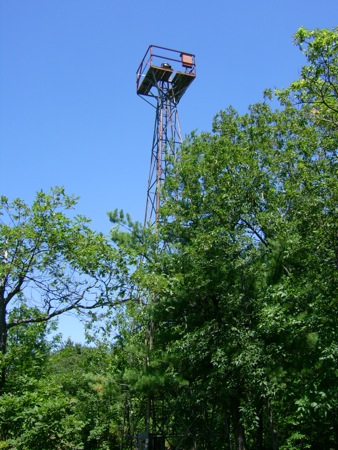 Those are 2 different towers that I passed.  These are on a ridge that runs North-South, and which has a number of views to the West. Here’s a view of Barnes Airport in Westfield: 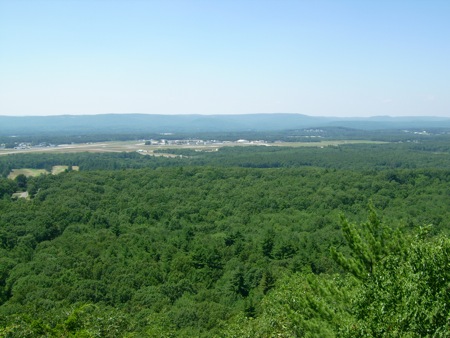 Last Fall, I had taken a picture of that airport from the other side, while biking past on Route 202.  At the time, I remember seeing the ridge and the towers beyond, and though of that this time.

I was also high enough up to have birds of prey flying around.  Here are 2 that passed almost directly over me: 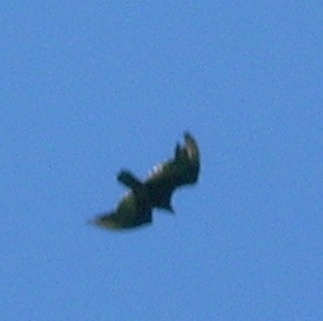 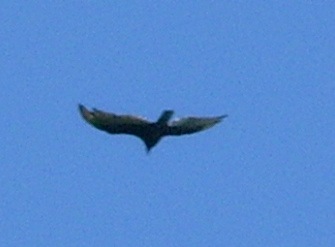 Later in the section, I saw some views of the Western part of Holyoke: 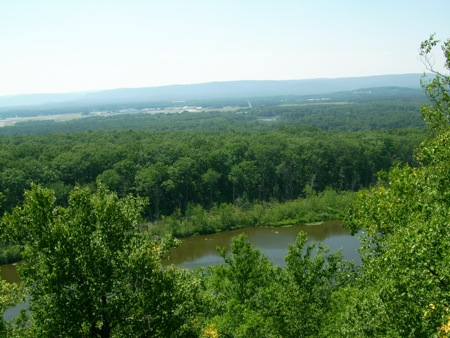 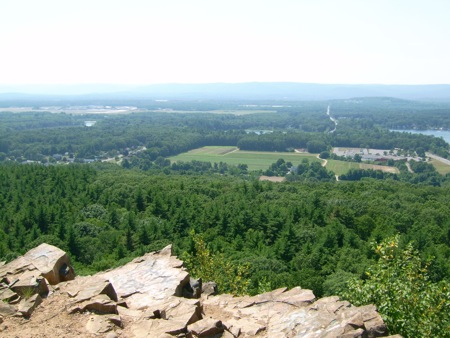 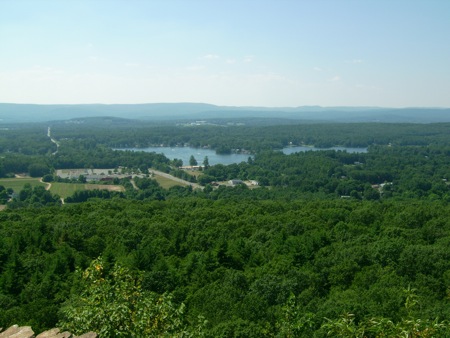 Soon after that, I got a little lost.  The M-M trail is marked with white paint blazes on tree trunks (and occasionally on rocks).  There was a point where I found a double blaze, which indicates a change in trail direction, and then saw a blaze on a tree off to my right.  I headed off in that direction, and then had trouble locating another blaze or a well-traveled path.  I did find one old, faded blaze, but nothing beyond that.  I tied looking in several directions for 15 minutes or so (worrying about my water supply), until finally I made my way back to the double-blaze marker and looked further along that trail.  Sure enough the trail continued on what looked like a trail, and then made a slight turn to the left.  So, I got underway again.  After nearly another hour, I came down to US-202 in Holyoke, near the McLean Reservoir, where I had parked the car (in which I had extra water stashed).

Total hiking distance was about 8 miles.