A month ago, I did an organized bike ride that started out nearby in Northampton.  It was a fundraiser for the youth cycling programs of the Northampton Cycling Club.  Unlike the MS rides I’ve done, the riders weren’t expected to raise donations – the funds were simply from registration fees.

I did a 40-mile ride.  I’m sure I could have done more, but the next level up was 65 miles, and I didn’t have enough time to train for that.  It was a neat ride, though, as I went through some towns I’ve been in before, but on unfamiliar roads.

The ride first went Northwest into the town of Williamsburg, and then headed North into Whately.  I went through Whately center, passing its quaint library, and then found some nice views just North of that, such as this: 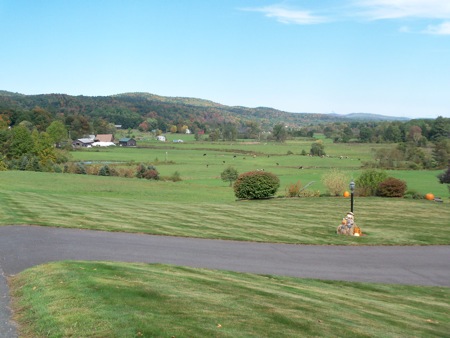 Eventually the route took me into Deerfield, where I passed by Warm Colors Apiary (we’ve bought their honey in local stores).

I crossed state hwy 116 and soon was looking for the one rest stop on my route, where I could have a snack and refill my water bottles.  The route cue sheet (which listed all the turns and mileage) said the stop would be in front of a small cemetery.  I passed said cemetery, but there was no rest stop set up.  I eventually found it another mile or so up the road, near some farm fields.  Apparently, the ride organizers had chosen the cemetery site and set up there without checking whether it was legal.  Turns out they needed a permit to do that – some neighbors complained, and the police came by and told them they couldn’t be there.  Hence, they moved.

The rest stop was on a loop at the Northern end of the route, and the beginning and end of that loop both crossed a bridge over the Deerfield river.  Here’s the view from each side of the bridge: 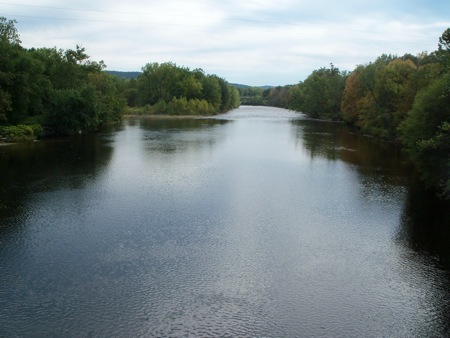 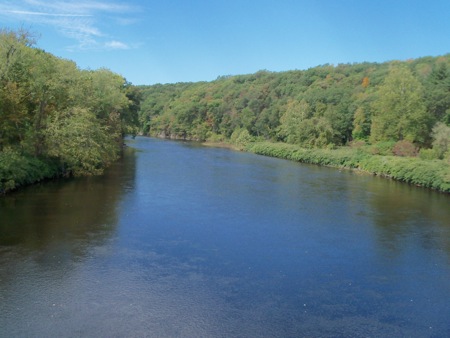 After that, the ride went on a dirt road for a while, and then started up a long climb.  That climb was the one really grueling part of the ride, though fortunately it wasn’t dirt for very long – most of it was paved.

After coming down that hill, the ride headed into the town of Conway (which I’d never been in before).  We passed Conway center, where a big festival was going on (it’s apparently an annual event in the town).  This made the ride slightly more challenging, as tons of cars were parked along the side of the roads near the town center.

Once past that, the route went South, climbing again, and leading to this view of the hills to the West: 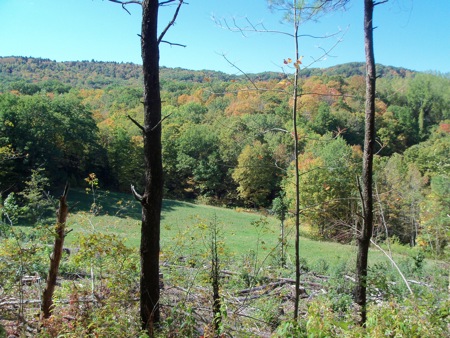 Before too long, the road entered Whately again, and eventually joined up with the first road we’d taken through there, which went back through Williamsburg into Northampton.  My total ride time for the 40 miles was just short of 4 hours.