Blog : A Free Show’s in Brooklyn

A Free Show’s in Brooklyn 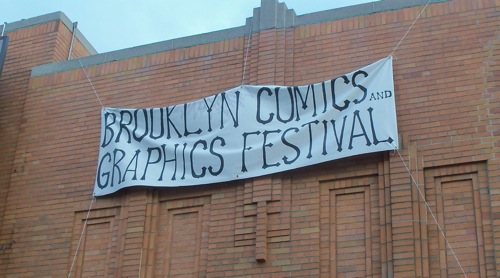 A month ago I made my way to a small, one-day comic convention in New York: the Brooklyn Comics and Graphics Festival.  It’s a pretty new con – this was only its second year – but it attracted a great variety of talent.

I drove part of the way there, but parked in Connecticut and took the train into NYC.  I noticed that there was a book rack placed in the train station by the local public library: 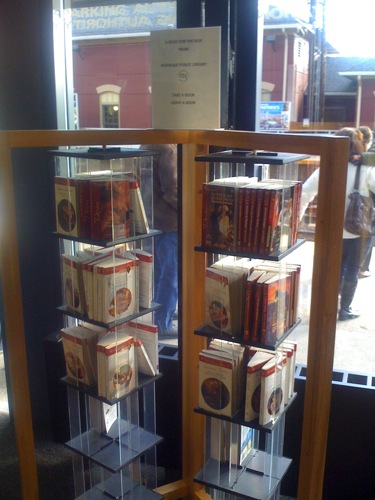 A closer look revealed that all the books on the rack were romance novels: 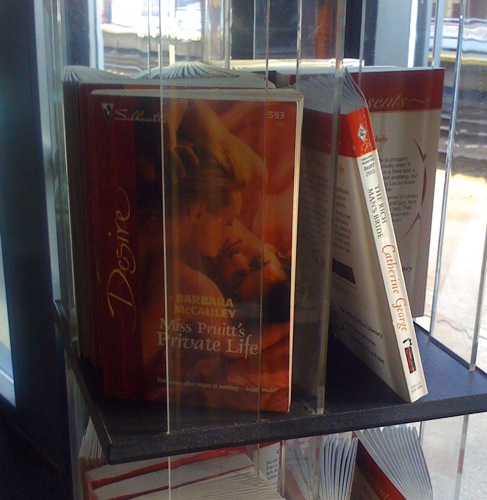 Perhaps that’s what the library expects train riders will want to read.  I did not pick one up, myself.

I rode the train into Grand Central, then took a couple of subways to get to Williamsburg.  While walking to the convention site, I saw an interesting Orthodox church: 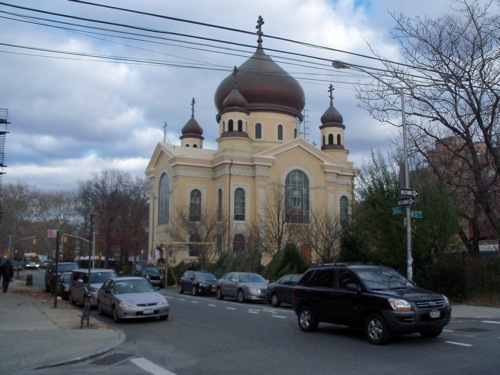 And also this graffito beyond a freeway overpass: 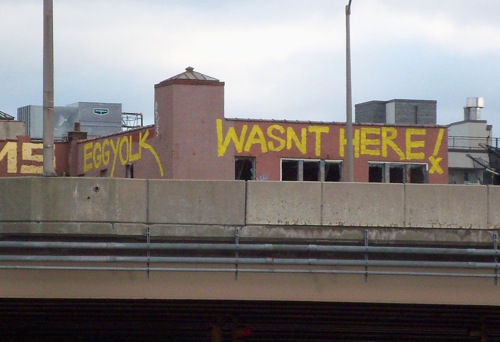 I wonder where Eggyolk was, then…

Here’s the venue that the show was held in, another church: 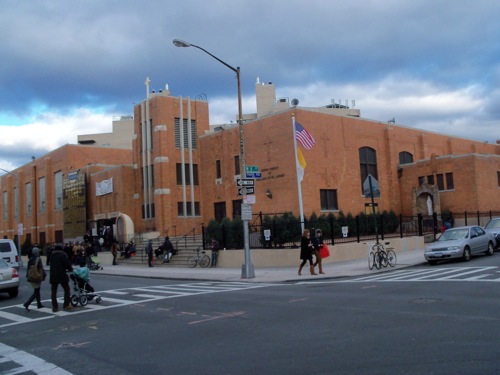 Specifically, the event took place in the church’s gymnasium and cafeteria.  Here’s the exhibit/signing floor in the gym: 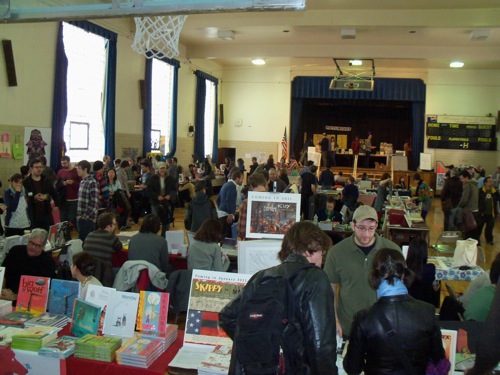 There were a couple of tables on the stage at the far end.  I took another picture from the stage: 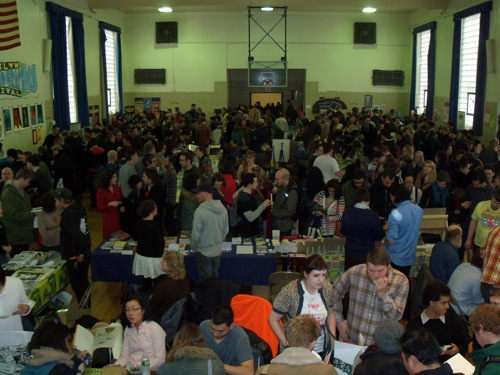 It’s a bit hard to see the layout of tables in these pics, partly because the place was so crowded.  Attendees filled the room all day.

There were a few people I wanted (and got) to see there, starting with Jason Little: 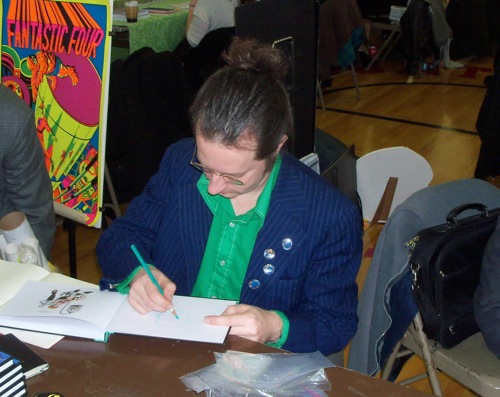 I had picked up the first book of his comic “Bee” back in 2003, and then had lost track of the comic.  It turns out, he had only just published the second book, so I picked up a copy from him.  Haven’t read it yet, but I really enjoyed the first book, Shutterbug Follies, which is about a woman working in a photo lab who stumbles on a crime plot from clues in negatives that are dropped off.

Also there was Kate Beaton, whose archives I have now read.  I was going to buy the book collection of her strips from her, but she didn’t have copies with her.  Instead, she had a minicomic containing newer strips, which I bought. 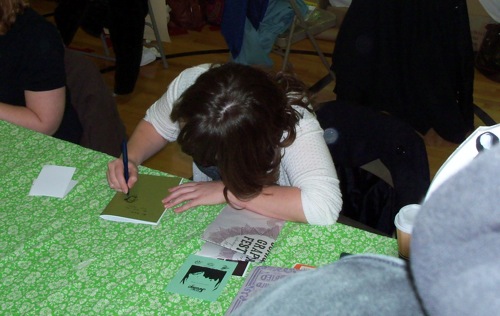 Yes, I seem to have taken pictures of the tops of people’s heads.

Kate said I looked familiar, and I mentioned that I had volunteered at NEWW the previous month.  On the back of the minicomic she sketched me and wrote a thank you for volunteering!  She may not remember that I messed up her line management, but she probably wouldn’t dwell on it anyway.

The always funky Lynda Barry was there, so I got to meet her for a second time: 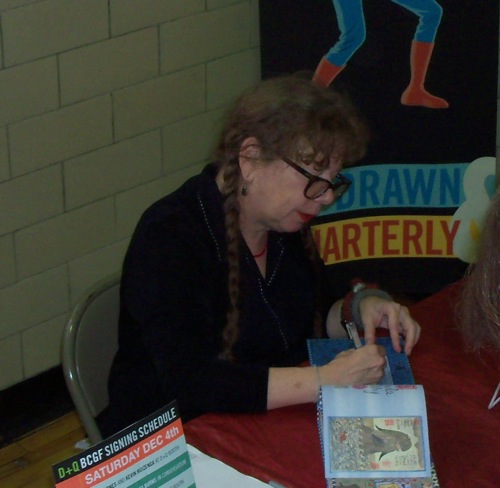 She has a new book out about creating art, to go with her previous one about writing.  I now have both in my “to read” pile.

I got a few comics signed by Paul Pope, who I had met once before: 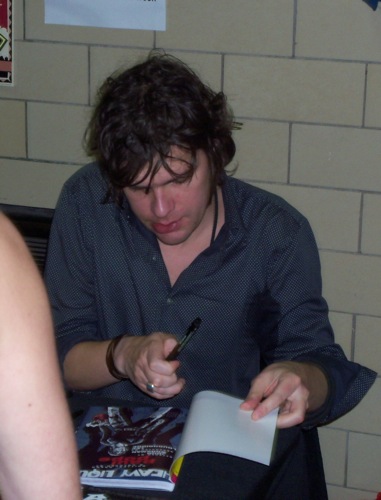 And then there was the one creator I most wanted to meet there: someone whose work I’ve been reading for more than 2 decades, but whom I’d never gotten to meet before.  My main reason for attending BCGF was to see: 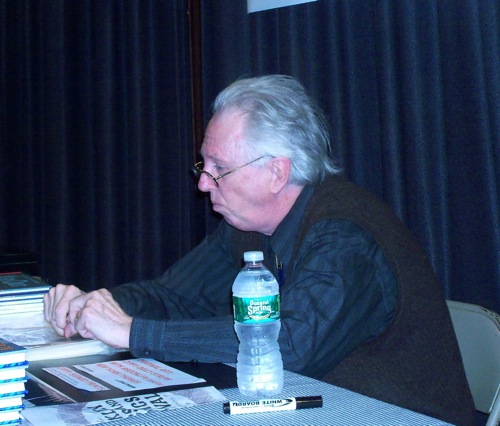 Bill Griffith.  If you aren’t familiar with Zippy the Pinhead, well, it’s probably the most surreal strip you’ll find on the newspaper comics page, and one of the most satirical.

Down in the cafeteria, below the gym, they had a section with food being sold and a separate panel area.  I went to 3 panels during the day.  The first was basically a conversation between Lynda Barry and Charles Burns, who were classmates in high school and college. 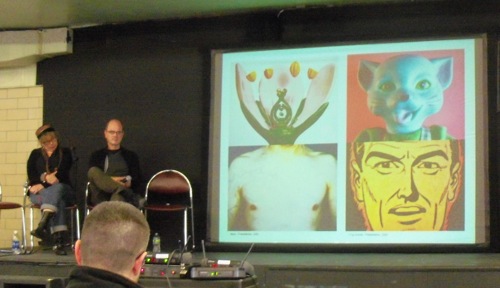 My favorite moment from this panel was Barry being asked about a lot of recent collage work she’s done, and her anecdote from her childhood about that.  She said she spent a lot of time cutting pictures out of magazines her mother (who worked in a hospital) brought home from work.  When she was bored or feeling bad, she would do things like cutting slits in a picture of Beefaroni and then have cut-outs of different famous people rise up from the pasta and slide back down into it.  It never failed to amuse her, and I can see why.

The second panel I went to featured Evan Dorkin and Paul Pope, and they were supposed to be joined by an old industry veteran Irwin Hasen to discuss his and other artists’ comic work from earlier decades.  Hasen was unable to make the con because of illness, and though I’m a fan of the two remaining panelists, they failed to hold my attention much. 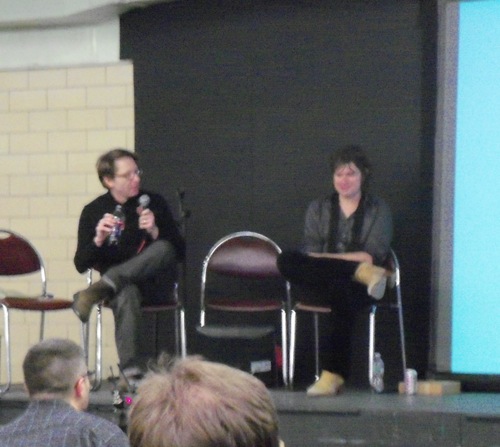 Look, I was so bored, I couldn’t be bothered to hold the camera still!    😉

The third panel had Bill Griffith on it, so I wanted to hear him speak, though the subject was the comic strip “Nancy”, which I’ve never been a fan of. 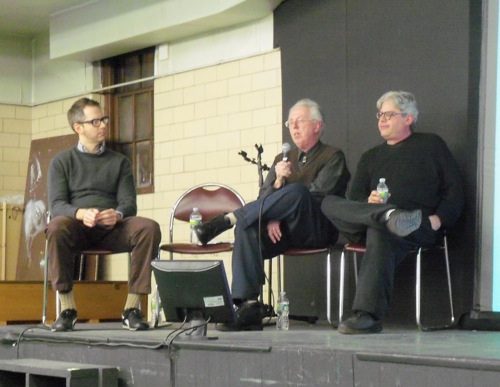 It was okay, and though I’m still not convinced by the panelists that “Nancy” is one of the greatest strips ever, they did show some funny examples of it and other Ernie Bushmiller work.

I left the convention shortly after that last panel, and went in search of dinner.  That ended up being at a little Turkish restaurant where I got some decent (but not great) falafel, hummus, and grape leaves.  On the way, I was asked if I was Jewish by a man handing out literature (I admitted that I’m not).  It appeared that the local Chabad organization was doing this as part of Chanukah, and they had a large menorah on one street corner:

After dinner, it was back on the subway, back on the train to CT, and then back in the car to home.  In between subway trains, someone in front of me on the platform noticed a rat crawling around on the tracks, and declared that she had now had the full NYC tourist experience.  Indeed.