Blog : Walking through woods on a snowy afternoon

Walking through woods on a snowy afternoon

2 weeks ago I went on a hike in the hills near home.  This was a few days before the big snowstorm that I chronicled in my last post, so while it was snowy, there were only a few inches of it on the ground.  That Sunday was otherwise sunny.

I hiked a half-mile down the road to the trailhead I’ve used many times before.  Here’s what it looked like once I was a little way into the forest: 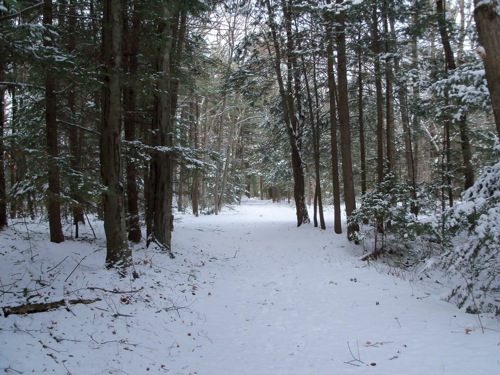 I soon took a different fork than the one I’ve taken in the past – one I’ve never followed before, though I had an idea where it would take me.

It had snowed the night before, so there was stuff still clinging to the trees: 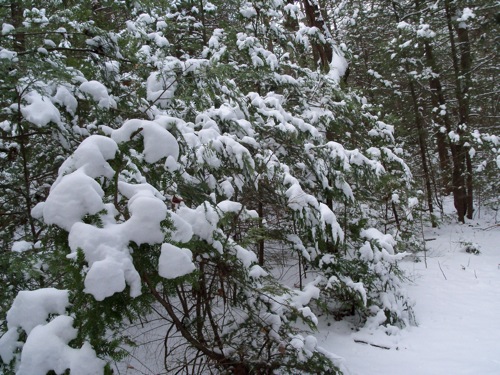 As I started climbing up toward the ridge, I noticed a number of bike tracks in the snow (usually crossing the path I was on).  I marvel that people will mountain bike in such slippery conditions, but then I’ve never been the type to be very risky, so there are a lot of things people do that seem dangerous to me.

Here’s a shot of the path being more inclined: 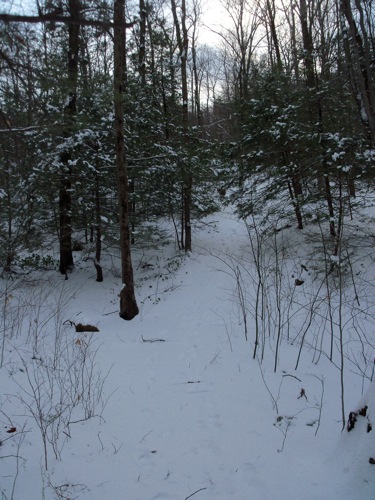 I also noticed little tiny pine trees that had sprouted before winter: 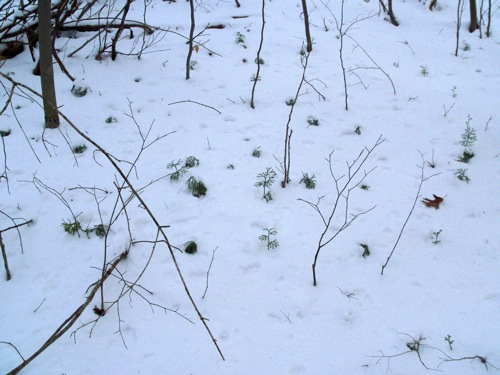 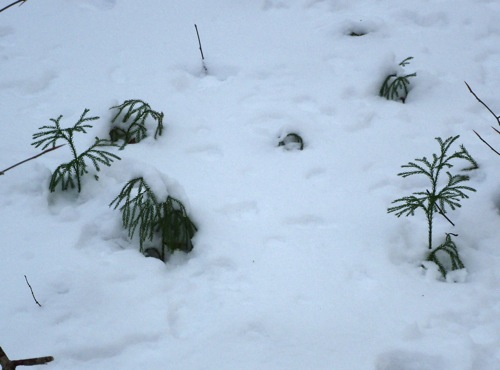 There were a few forks in the trail, where I had to guess which way I should go.  I was sometimes able to sight by the top of the ridge, and sometimes looking at the sun helped.  Eventually, when I got near the steep part of the ridge and started moving laterally, I followed a wide bike track (which could have come from a motorized bike of some kind).

Eventually, I spotted a chain link fence, and knew that I had gotten to the point I was expecting.  This is an old military installation: 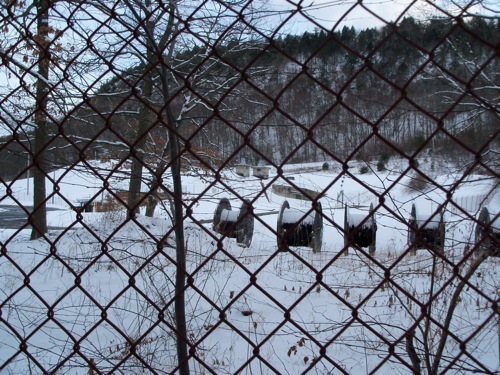 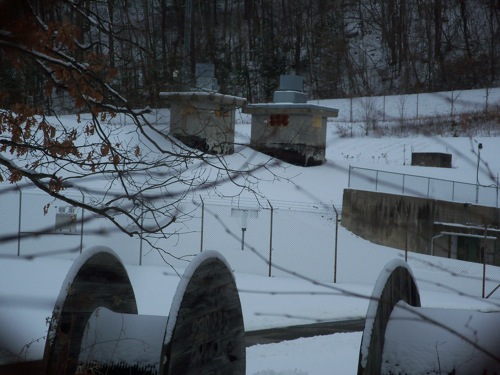 It’s no longer run by the government, but is owned by Amherst College.  I don’t know offhand what they use it for.  I had known of the place’s existence for some time, but had never laid eyes on it before.

I followed the fence around to the front gate: 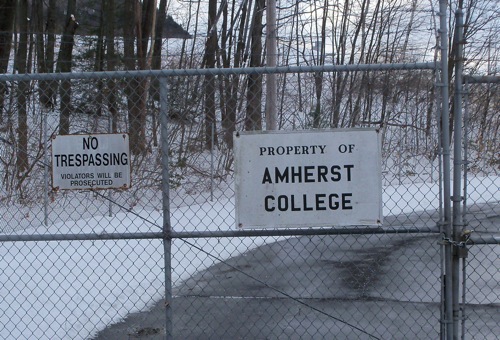 And just as I emerged from the woods onto that access road, I saw these trucks parked nearby: 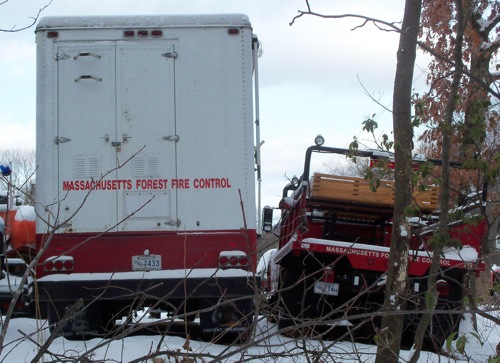 Much of the Holyoke Range is state parkland, and so it would make sense that they have a facility for fighting forest fires.  Here’s the facility proper, which is on the same road (called Military Road) as the college’s property: 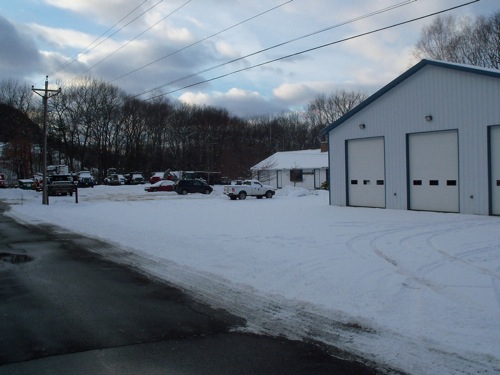 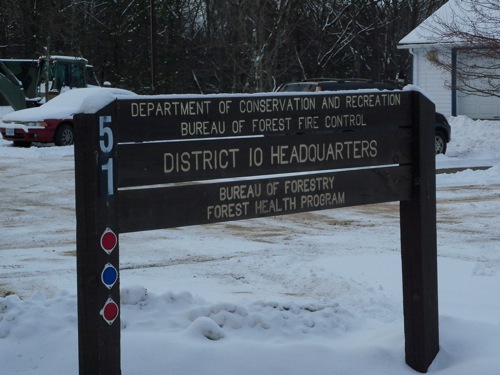 From there, I headed up the road toward Rt. 116, which is the main road crossing the range.  It passes through The Notch, and the point where it goes through is about where Military Road intersects it.  I crossed the highway and headed over to the Notch Visitor Center, and from there started heading downhill on another trail that I’ve used many times before (which parallels Rt. 116).

That trail dumps one out near Atkins Farms market, where I took a look at the construction they’re doing.  It looks like they’re building an addition: 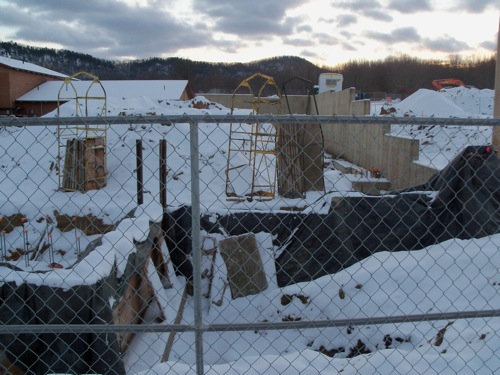 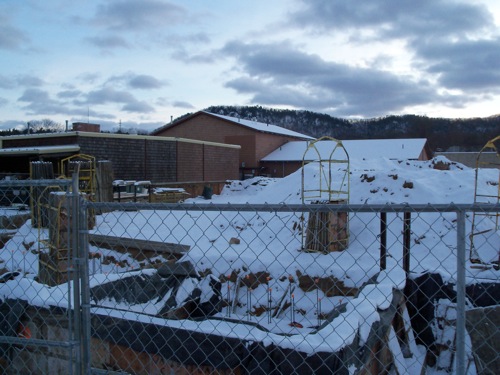 Here are some pictures taken from the same spot of the peaks on either side of the Notch.  This is Bare Mountain: 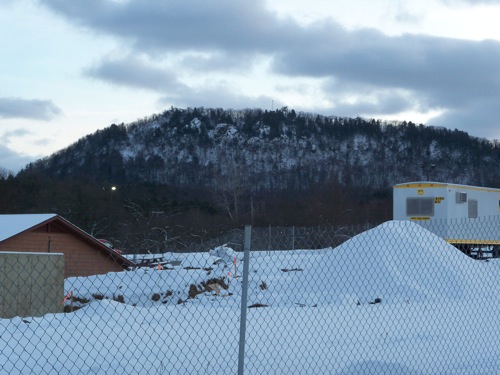 That’s the Eastern end of the portion of ridge I followed, and the military reservation is a bit downslope from it. 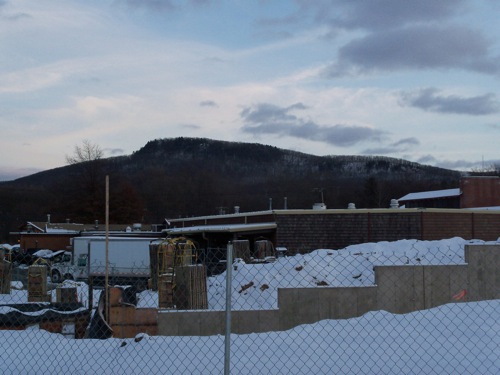 From there, I walked along the road to home.  As I passed back by the first trailhead where I’d started, I noticed the sungoing down behind the ridge, and I’ll end this post on that note: 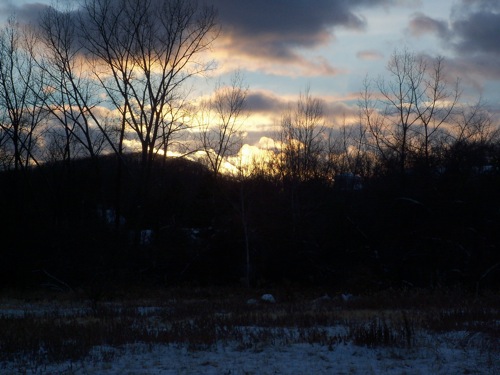 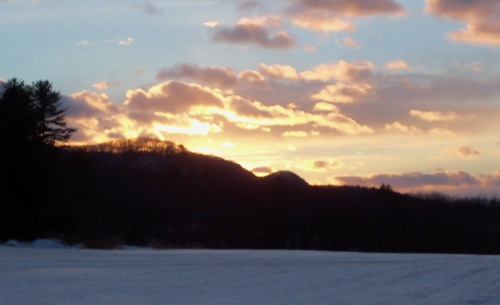