Over the July 4th weekend I made an attempt at a longer bike ride, intending to ride to Shelburne Falls (where I had never been before).  I made sure that I had plenty of air in my tires, and plenty of water, and set out mid-morning, riding first to Northampton.

I headed out into Florence, and then North through a rural part of Noho.  While on a country road, I spotted this house with interesting wood/paint work: 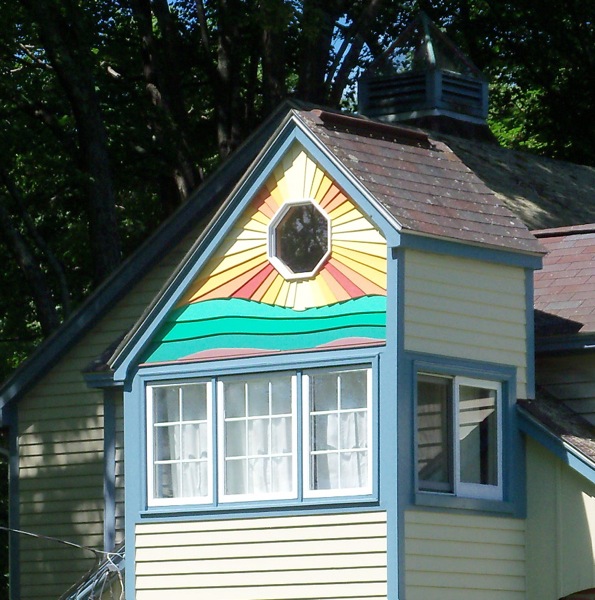 Who knows who lives there.

Soon after that, I passed through part of the town of Williamsburg, and then into Whately.  I passed by the Whately reservoir while climbing a good-sized hill: 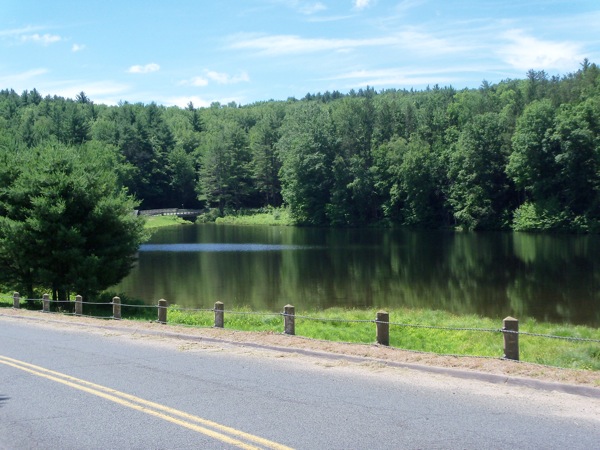 and I saw just a few geese hanging out there: 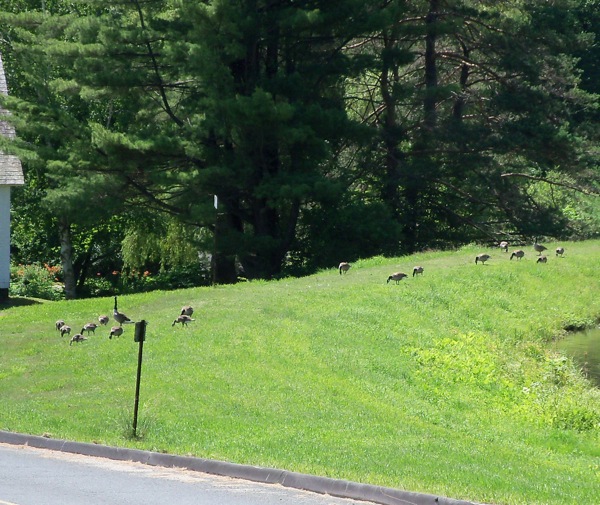 I kept going, with more climbing to do on the same road after that hill.  Before too long, I was in the town of Conway, where there is a nice, long downhill stretch that takes you into the town center.  This was all part of a route that I had traveled on a couple of previous rides, but I started into unknown territory as I headed North away from the town center.

Unfortunately, I didn’t get very far.  About a mile North of Conway center, I hit a bump and my front tire blew out.  I suspect it was overinflated, as I had put air in the tires with an air compressor.  I always carry a patch kit and tools with me, so I quickly removed the tire and found that there was a nearly 2-inch gash in the tube.  I set to work patching it (using 2 patches in the process).

The patch seemed like it had worked, but I pumped up the tube to test it, and it started to leak out the side of one of the patches.  So, I slapped another patch on that.  Again I tested the tube with air, and after holding for a few seconds, it leaked again.  I tried with a fourth patch, but could not get the thing to hold air.  At this point, I had spent nearly an hour working on the tube, and knew I wouldn’t have time to go to Shelburne Falls.  I walked the bike back into Conway to see if I could find some place to get a new tube.

I had lunch at a general store and luncheonette in town, and asked where there might be a bike shop.  It turned out that the nearest one was several miles away in Sunderland.  Too far for me to walk.  I tried searching on bike shops on my phone in case there might be a closer one, and discovered a bike touring company that was located not too far away.  I called their number to ask if they would sell me a tube.  As it happened, they had a tour group who would be riding right past my location in a little bit, and they could give me a tube at no charge.

So I waited a while (it ended up being another hour), and the group did ride by and stop.  The tubes they had were for standard road bike tires, rather than the somewhat wider ones my hybrid bike uses, but I made a go of it.  With enough inflation, the tire seemed good to go, and I started riding back toward home.  However, when I was back in Whately, just a little way past the reservoir, the front tire went flat again.  I tried putting in air, but it would leak out right away.  At that point, I needed to get home, so did not have time to try patching the temp tube.  So I gave up on the ride, and called home to get a car ride.

The next day I went to a bike shop and bought 2 tubes, so that I could have a spare one to carry, and also got a new tire, as the old one had some of the metal bead exposed (which could have pinched or scraped the previous tubes, contributing to the leaks).  I planned to take another crack at this trip later.  In the meantime, I had ridden a mere 29 miles (and walked 2 miles or so).