Blog : Around the water in 8 hours

Around the water in 8 hours

2 weeks ago I went for my next training ride (I had a few weekends where I didn’t ride, because we were on vacation – pictures from that to come).  This time I planned a route around the Quabbin reservoir.

I started out the same way I had a month previously – by riding east to downtown Ware.  This time, I stopped to take a picture of the town’s welcome sign, with its claim to fame, of sorts: 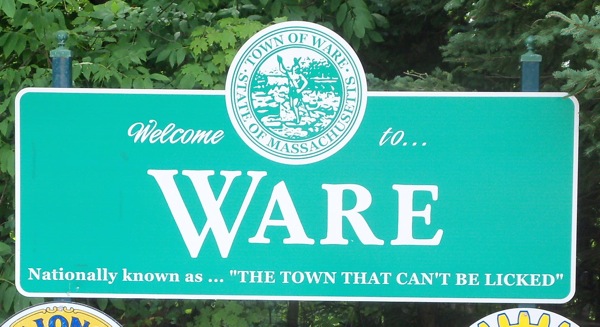 Click here to see where that name comes from.

They must have known I was coming, because they built a cake: 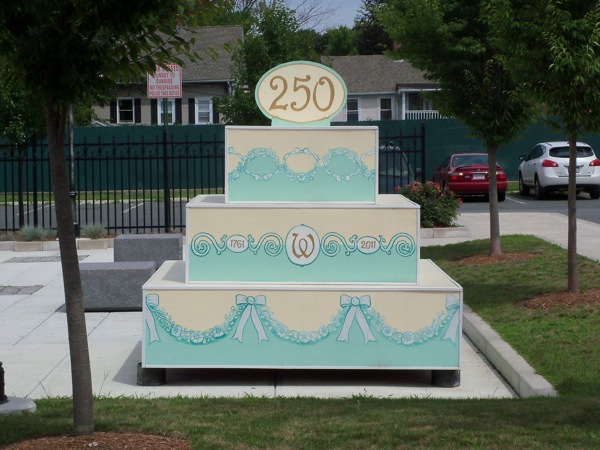 The town is apparently celebrating its birthday: 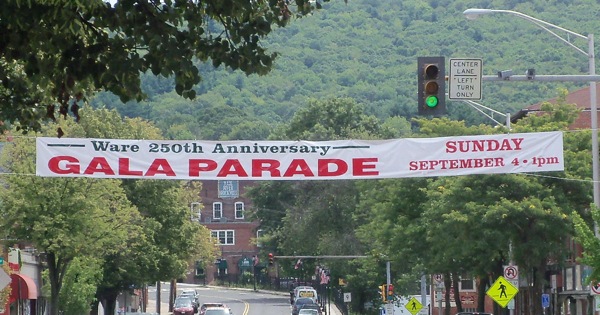 I stopped here for a bit of a break, next to a tiny park: 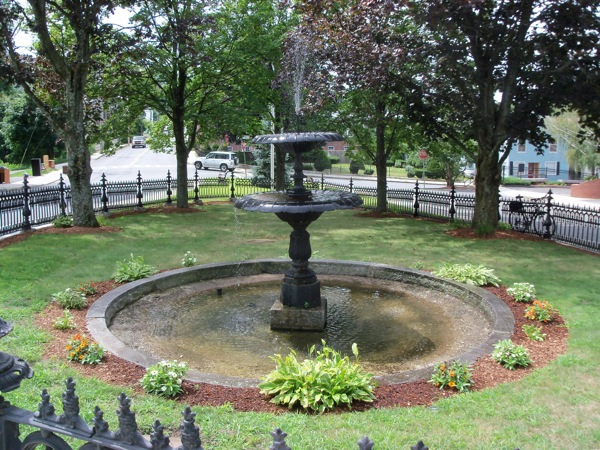 The plaque that went with this little patch of green: 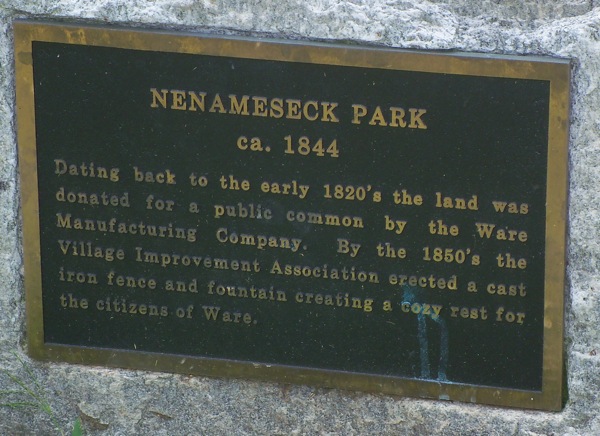 After my break, I headed north out of town on a minor road that ran not far from the Quabbin, though it was low enough that it didn’t offer any views of the water.

Soon after leaving downtown, I did see this sign: 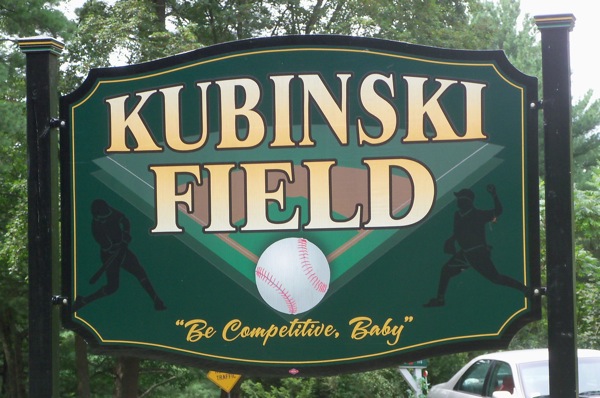 Apparently Ware is the town of weird quotations on signs.

While I couldn’t see much scenery to the west, where the reservoir was located, I did see some nice views of a ridge to the east: 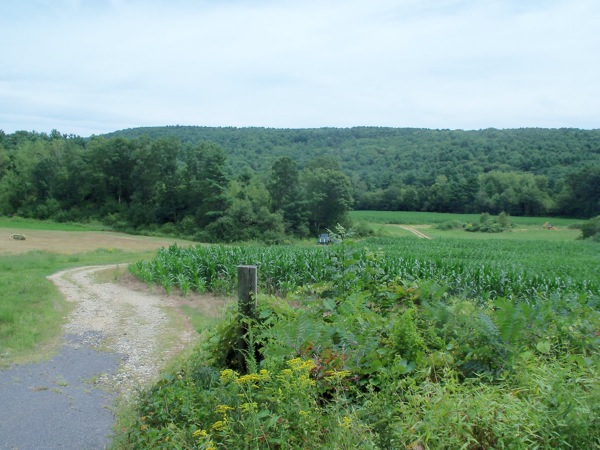 On this road, I passed into the town of Hardwick, and soon, I saw a frog sitting in the middle of the road: 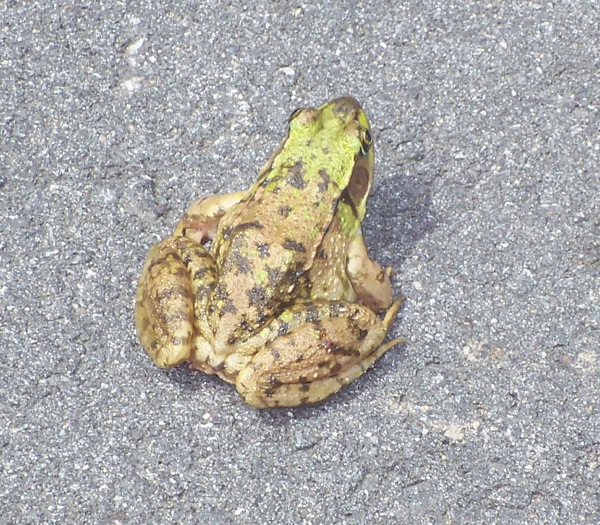 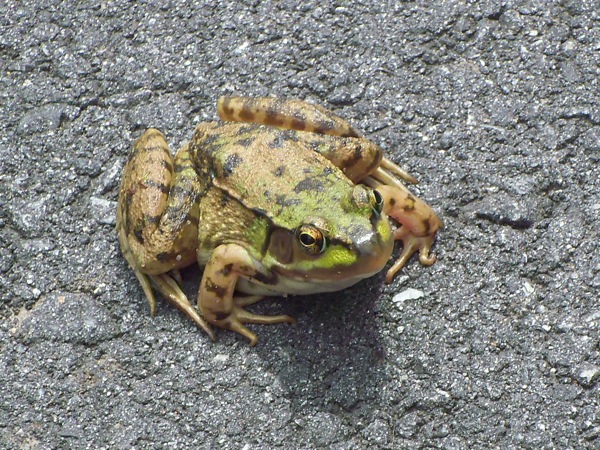 I’m sure it was enjoying the sun there, but I was worried about the traffic (although there wasn’t a whole lot of that).  I did see one car go by that passed harmlessly over the frog.  Hopefully it continued to be that lucky until it decided to leave the road.

The road soon started to descend a ways, becoming almost completely wooded, and then turned east.  There were an entrance or two to the Quabbin reservation at that point, and the road started to climb toward Hardwick center.  It climbed for a ways – more than a mile, certainly, and then a horse farm provided some more open views: 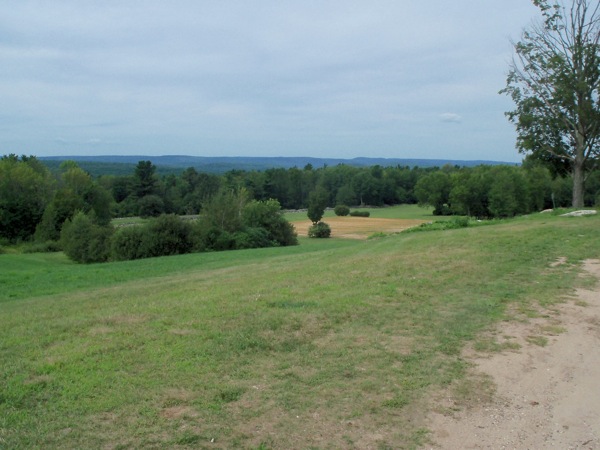 I think I could almost see the water from there, but not quite.

Soon I cut over on a side street to state highway 32, missing Hardwick center so I could head north sooner on 32.  I came upon a couple of houses through whose yards I could actually see the water: 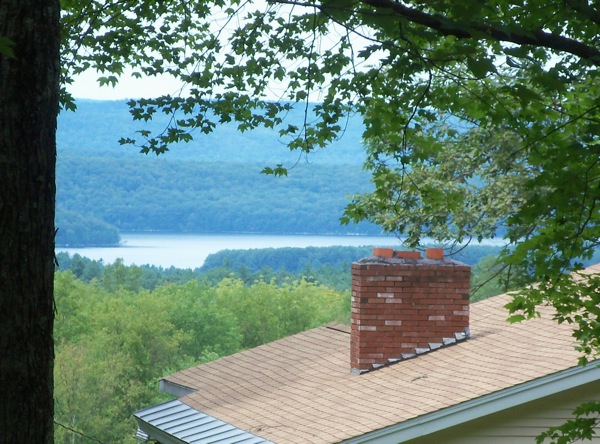 The road climbed a bit more, but then went downhill as I crossed the Petersham town line.  At that point, the road surface became a good deal worse, and there were hardly any lines painted on it to speak of.  I was surprised to find a numbered highway looking like that, but that section of road turns out to be pretty low traffic compared to the section in Hardwick, so maybe it makes sense.

In one house’s yard I saw a couple of wild turkeys near the road.  However, by the time I’d gotten out my camera, they had retreated a bunch: 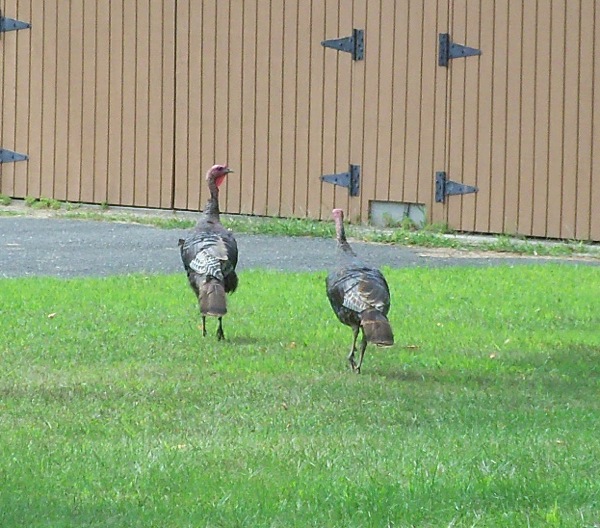 I eventually got to Petersham center, and tried stopping at the one restaurant in town.  It turns out that the place closes at 2:00, which is exactly when I got there.  I was hungry, though, so I ended up getting some convenience food at the general store in the town center (which apparently would be opening up a deli in another week or two).

After eating I headed west toward New Salem on route 122, and to skirt the northern end of the Quabbin.  Before getting to the Quabbin itself, I passed the picturesque Harvard Pond: 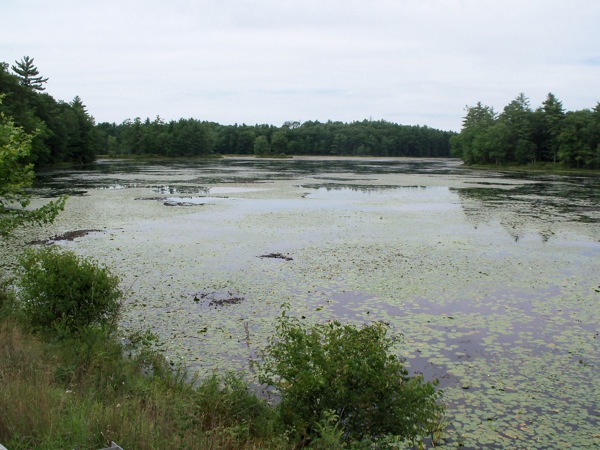 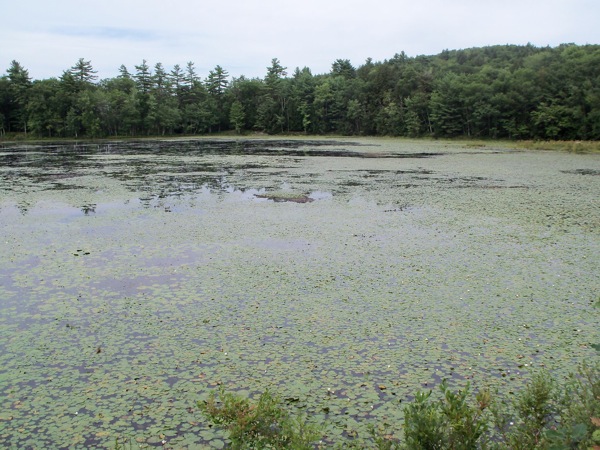 A bit of a ways after that, I turned off the highway and went into the Quabbin reservation, I passed a boat launch, and then went onto a narrow road that only allowed bikes and pedestrians.  There were a couple of little bridges over parts of the water – here’s the view in each direction from one of those bridges: 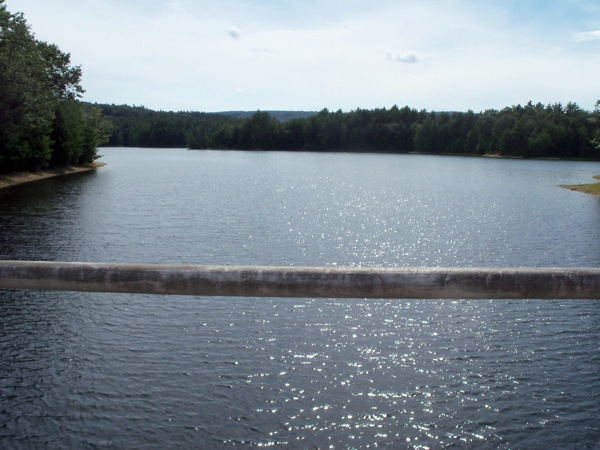 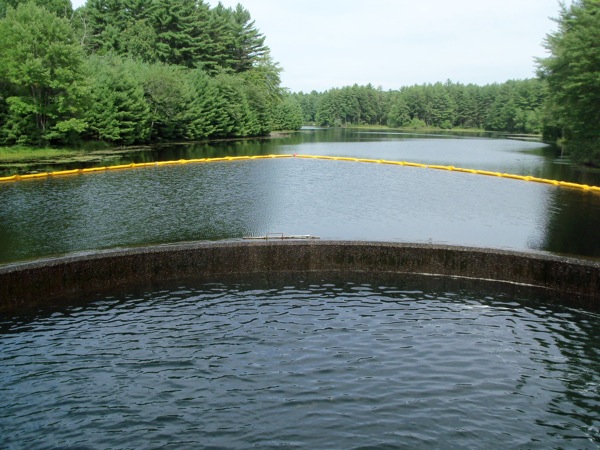 There was a semicircular edge that water was spilling over in that second photo – sort of a little dam.  I noticed this little bird walking around on top of it: 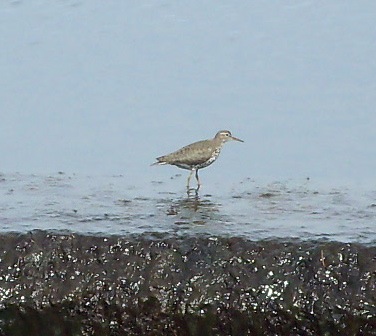 Just after that, the road turned to dirt and gravel.  Also, I came to realize that a few roads on the route that I’d planned were these little Quabbin dirt roads (they didn’t look like that on the map).  As such, they were unmarked, and at one point I went the wrong way and had to turn back from a dead end.  The road that actually went somewhere in that case looked like a less of a major path at its turnoff than the dead end one.

Here’s a picture of the road at one point: 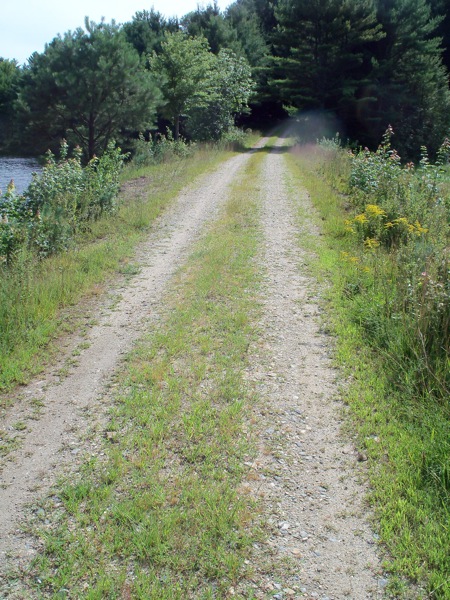 Riding on these paths was worth it, though, because I still got some nice water views: 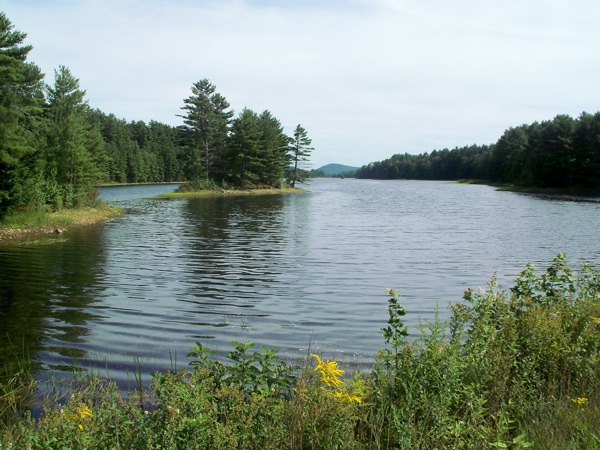 Soon after I took those shots, I had to climb a ways, and then I emerged through a gate onto a paved, but still very minor, town road in New Salem.  A little more climbing brought me to US 202, where I would turn south (but not until after a stop at the New Salem general store for some more liquids).

At this point, my legs were tired of hill climbing, but I still had some to do, as route 202 goes up and down as you head south through the towns of Shutesbury and Pelham (they call them ‘hill towns’ for a reason).  Just before leaving this highway, I got to a scenic overlook in Pelham which I’d driven by several times in the past.  Here you can see the Quabbin from the west side: 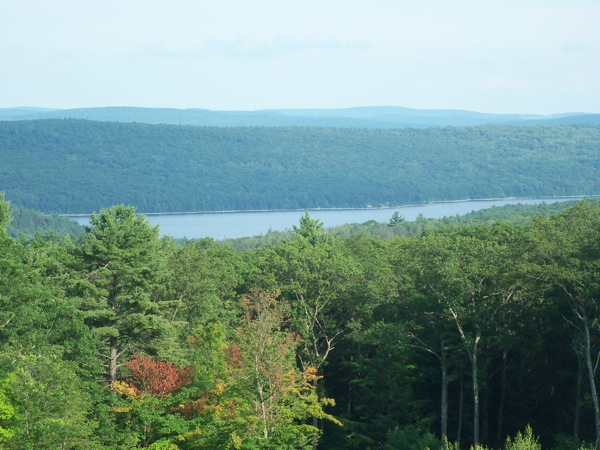 From there I headed west (and downhill all the way) into Amherst, where I went through the Amherst College campus and picked up the Norwattuck trail, which I took back to Hadley.  My total time for the trip was 8 hours, 15 minutes, and the length: 71 miles.

Watch this space for longer trips yet!