As you may have seen from my brief iPhone posts, I rode in the Will Bike for Food event this past Saturday.  It was grueling, but good, and I’m still marveling that I did it.

The morning was a cold one – the low had been only a little above freezing the night before, and when I arrived at the starting point in Easthampton, it was still only 40 to 45 degrees out.  I had planned for that, though, and wore a few layers.

The 100-mile ride was officially supposed to start at 9:00am, but as I checked in I was informed that other riders had already gone ahead and started.  I wanted to get back as early as possible, so after having a little food, I took off at 8:30.  I started out with another guy who had just checked in, and who had more experience than me, though I knew the ride course (at least the beginning of it) much better than he did.

At first we headed along the Manhan rail trail to its western end, then went north, cutting through a bit of Southampton before heading into Westhampton and up(hill) to Outlook Farm.  We then went west on route 66 (which I specifically had trained on), with its slow climbing leading up to the first big hill.  That hill wasn’t too bad, and in the climbing leading up to it we only stopped once (my endurance has definitely increased).  Having been over this part of the route before, I was a lot more confident going down the steep downhill portion.

The route went south on highway 112 in Huntington for just a bit, then headed west on a road called Bromley Road.  The Food Bank website had claimed that the hill we’d previously climbed was the worst of the course.  I have to disagree.  Most of this Bromley Road involved climbing, and the climbing started with a very steep part around a hairpin turn, so one could not have any momentum going into it.  This area is where my erstwhile companion pulled away as I took a rest, and he ended up out of sight.  As I climbed further parts of this road, other cyclists caught up and passed me.

Eventually the road ended at a slightly busier road called Skyline Trail in the town of Chester.  There was a little more climbing on that road, but also some nice views, such as these pictures I took just after getting on the road: 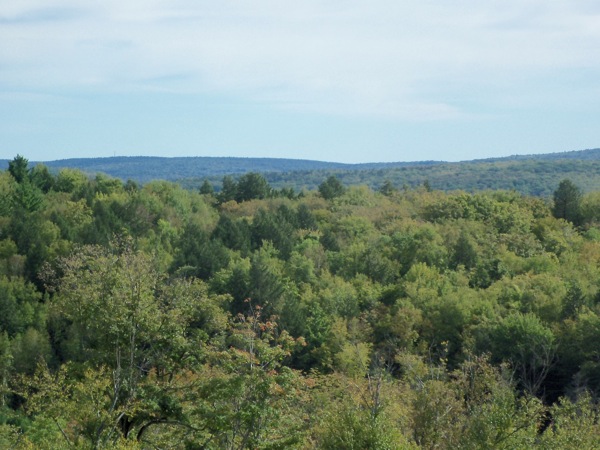 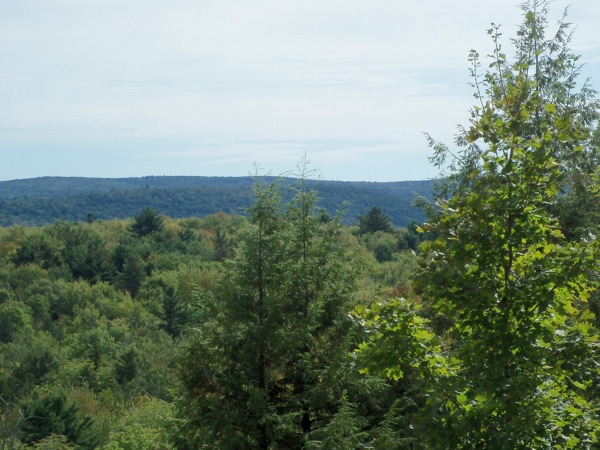 Those are looking east, back toward Huntington.

Skyline trail took me into the town of Middlefield, where I passed a biker I hadn’t seen earlier.  Soon after that, I arrived at the first water stop, which was at the town hall.  The biker I had passed caught up and stopped there, so I found out that he was also doing the 100-mile ride, and he’d started before me.  He ended up leaving the stop shortly before I did.

After some water and trail mix, I started out again, and took a picture of the actual Middlefield town center: 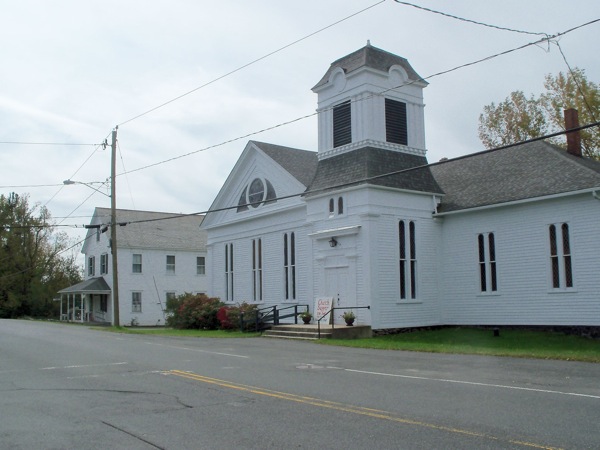 The road started going downhill a bunch after this, and I passed that guy again.  It turns out I was not the slowest rider on this course – merely the second slowest.

I stopped for another view picture, and saw this windmill on a farm: 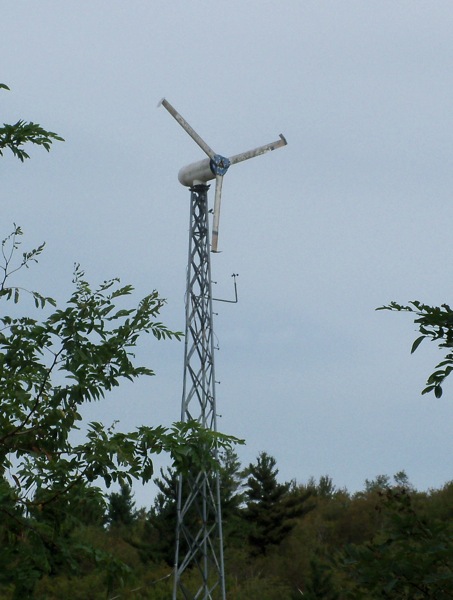 Here’s the view in that spot looking west/northwest: 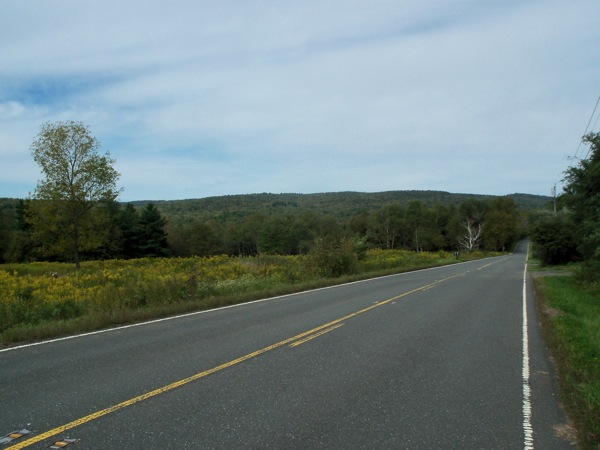 There were a few short uphill parts as I continued on this road, but then more lovely descents.  Soon I was in the town of Hinsdale, and went off on a side road the led to route 143.  I turned onto that road only for a few yards, then turned off again to head north on New Windsor road.  This is a narrow road leading through a wooded area, and it comes to a T-intersection where we were instructed to turn left (onto the fun-named Frank Schnopp Rd.), and head west.  This road went by a reservoir:

That tall, thin thing in the background is a high electrical tower (you can sort of see the power lines).  After I stopped to take that picture, I passed a better view of the water, but didn’t stop again as I wanted to make good time (I passed up other picture opportunities later for the same reason).

Somewhere around that reservoir I passed into the town of Dalton, and eventually turned north briefly, ending up at Mass route 9.  This was the westernmost point in the ride (being near Dalton center I was not very far from Pittsfield).  I started eastward on 9, thinking the ride would be fairly easy along this busy highway.

It wasn’t that easy.  While route 9 out in that area has nice wide shoulders to keep one away from traffic, it also spends a few miles slowly climbing from Dalton into Windsor.  The climb is so gradual, it looked like I shouldn’t have trouble with it, but I couldn’t get up much speed and had to stop and rest several times.  I got a little worried at this point, but pressed on.

Finally, after some leveling off and more climbing, the road started heading downhill out of Windsor.  There’s quite a bit of downhill taking one into the town of Cummington.  One site you see on the way down is this observatory: 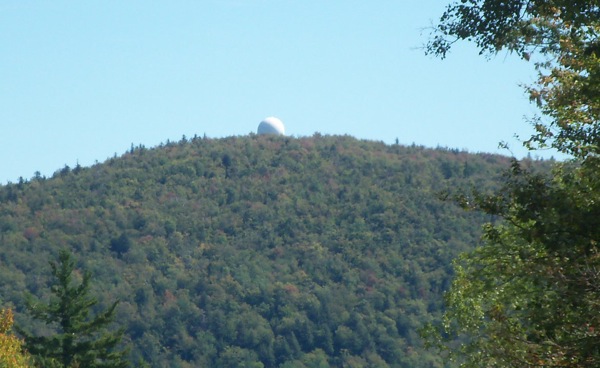 At least, I think that’s what that is.

As I got a little ways into Cummington, the ride course headed off onto a side road which then paralleled 9 for a while.  This road led to the next rest stop, but it also involved some fresh hill climbing.  At the top of the hill was the rest stop, located at the homestead of poet William Cullen Bryant (at least, the stop was at the end of the homestead’s driveway).  I didn’t see any other 100-mile riders here, but this stop was also the halfway point for riders on the 50-mile course, so I saw a few of them.

I was feeling sore and kind of shaky at this point, and very briefly considered taking the 25-mile shortcut to the end, but I decided I wasn’t that bad off, and that I owed it to all my loyal donors to press on.  I was feeling unusually cold as I started out again, getting to route 9 and then heading off north on Plainfield Road.  The sun came out, though, and the road started climbing, and I got a good deal warmer.  Interestingly, I also started feeling better as I climbed. Here’s a view from that climb, looking southwest: 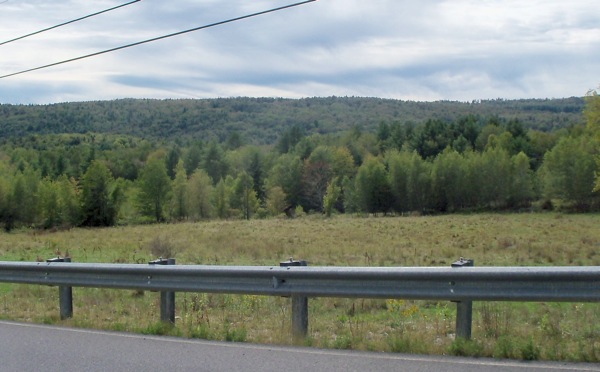 Another 100-miler passed me on this climb, whom I had seen just before on route 9 getting on her bike outside a restaurant.  Having a real meal probably would have been a good idea for me in the middle of the day, but I didn’t want to take the time.

By the time the road finished climbing I was in Plainfield, and crossed route 116. What followed was a sequence of back roads that went a little further north, but mostly east (including one Bear Swamp Rd.).  There was only a little bit of climbing on these roads, and eventually they started heading down, passing through part of the town of Hawley, and eventually into Ashfield.

In Ashfield I got onto 116 heading east through the center of town for a bit (I had passed through here in July on the way home from Shelburne Falls), and then turned north again on Baptist Corner Rd.  More rural backroads followed during which time I saw this cairn by some high electrical lines: 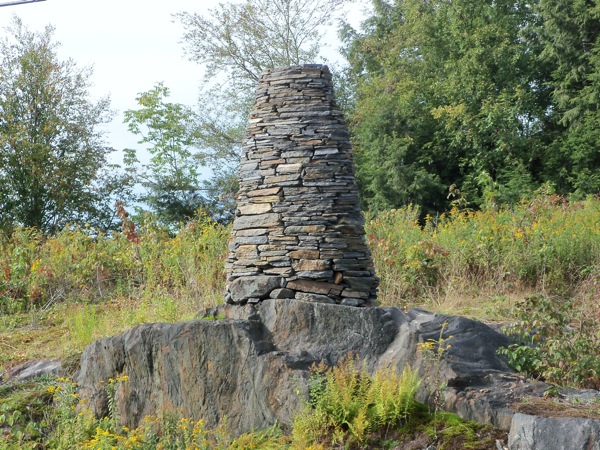 I passed into the town of Conway on these back roads, and ended up on Shelburne Falls Road, where I turned south, and headed down a big hill that I had climbed in July.

Soon enough I got to Conway center, and the third and final rest stop (just over 3 quarters of the way through the ride).  I had been at the previous 2 stops for 15 to 20 minutes each, but I spent just over half an hour at this one.  The rider who had passed me on the way up to Plainfield was there when I arrived, and she left soon after.  Shortly before I left the stop, the slow rider who I had passed hours before got to the stop – so he was clearly as determined as I was to do the whole 100, even though it was clear we wouldn’t make it back before the party ended.

One fun thing about this rest stop – it was outside a little bookstore/cafe, and there was a house across the street which seemed to be the home of some birds.  Specifically, a bunch of guinea fowl who were walking around grazing: 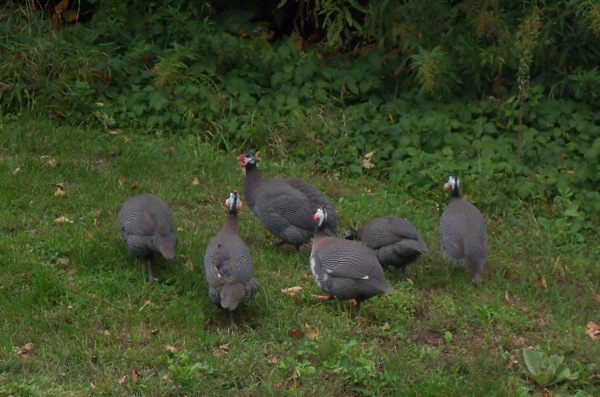 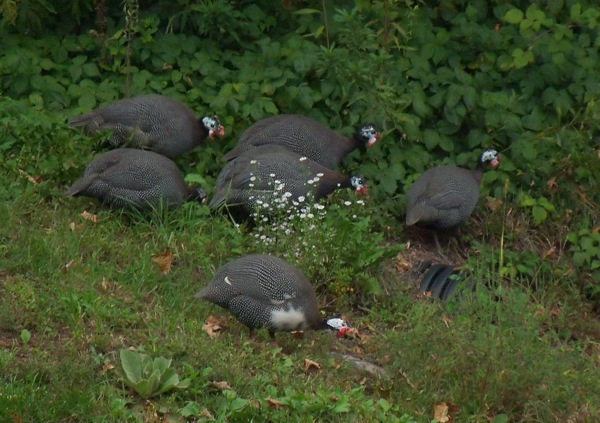 Just after 5pm, I left this stop to ride the last segment.  I first had to ride back west a bit on route 116, and then do one last section of hill climbing on North Poland and Main Poland roads in Ashfield.  While doing that series of climbs, I saw these sculptures in a yard: 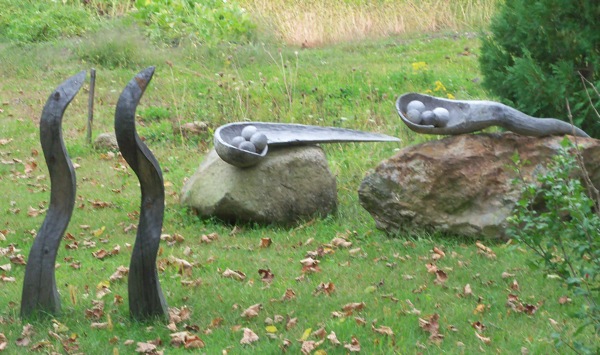 I don’t know if those are supposed to be spoons holding peas, or peapods.

Finally finishing the climbing, I headed south and down, down, down into Williamsburg.  I passed Williamsburg center and into Northampton, following the Mill River through the Leeds and Florence sections of Noho.  Finally, I picked up the new Manhan trail connector just a bit west of Smith College, and followed that back to the start of the ride in Easthampton.  I got there at about 7:10pm, 10 hours and 40 minutes after starting.  The few organizers who had stuck around to wait for stragglers gave me some leftover burritos, for which I was quite grateful, and I soon packed up the bike and drove home.

Thus ended my first century ride.  I felt more tired and sore than from any ride I’d ever done before, and I wasn’t good for much of anything that night, but after sleeping I felt almost normal the following day.  I could definitely do this again sometime, but I think the next time I ride 100 miles, I’ll go for a somewhat less hilly ride.