I have two different creature sightings to mention here.  One is from quite a while ago, but involves pictures.  The other just happened this evening, but I didn’t have a chance to take any pics.

First off, back when the weather was warm (mid-September) I heard a small noise on the sliding door to our deck, as though something had hit the glass.  One of the cats ran over there, so I thought I would see what was going on.  I turned on the deck light (which is on a motion detector), and saw a large praying mantis: 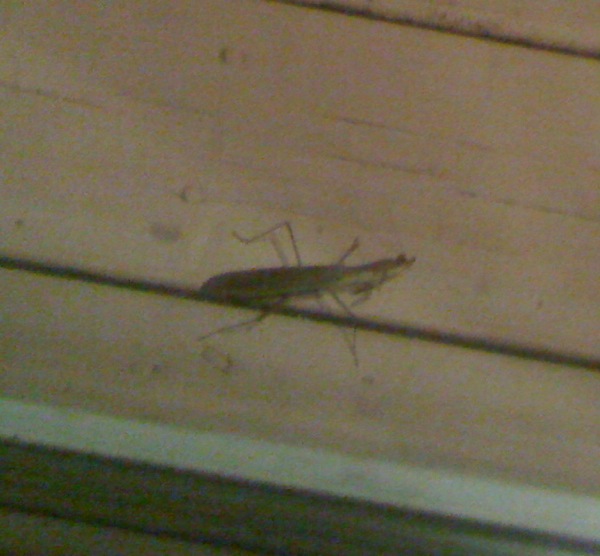 That’s not a great picture, but I could see that the bug was 3 or 4 inches long – bigger than most mantises you might see.

I went outside to get better pictures of it, but the light wouldn’t cooperate.  I managed to get this one pic with the light still on: 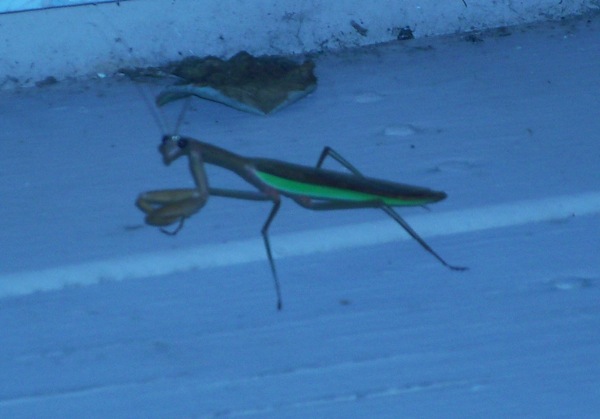 After that, the light went off and wouldn’t come back on, even though I moved around in front of its sensor, and we tried flipping the switch off and on again.  I got some pictures in the dark with the flash, but they were even blurrier.  Still, it was nice to see the thing, as praying mantises are my favorite type of insect.

Tonight I came home in the later evening, and as I got out of the car, I spotted movement near the garage door.  It was a salamander, perhaps 3 inches long including its tail.  I’ve only seen salamanders once before, and those were much smaller.  This one wanted to leave the garage (perhaps because of the light and noise that resulted from my driving in), and so I re-opened the garage door that I had just closed to let it head out.  I didn’t have my normal camera handy, and my cell camera would have been useless in the low light, otherwise there would be photographic evidence here.  In any case, I hope the thing manages to be warm enough this evening (the low temp tonight will be 34 degrees).