Visiting the Las Vegas Strip, that is.  It’s a long section of Las Vegas Boulevard where most (I think it’s most) of the big casinos and attractions are located.  On Monday night I had a the evening free, and decided to go walking up and down the Strip.

I started from the MGM Grand, which is at the intersection of Las Vegas and Tropicana Blvds.  Just across Tropicana Blvd. is the Tropicana itself, which has these light-wrapped palm trees:

Right next to the Tropicana is this place: 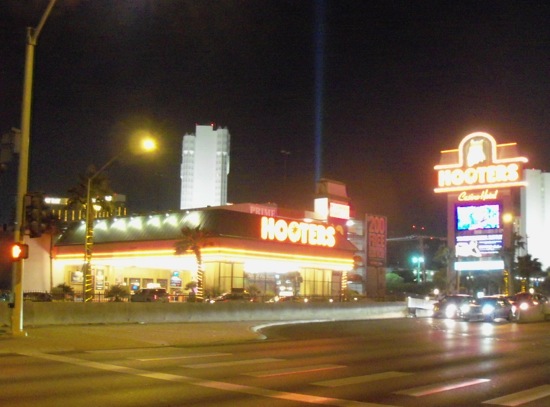 Who knew they operated a hotel or casino?  Not me.

I also noticed this set of signage: 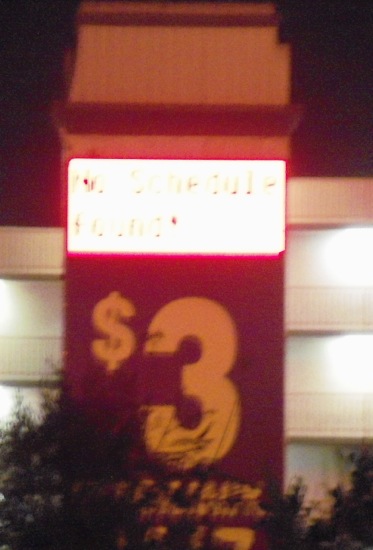 With its helpful electronic portion, better seen in the darker picture below: 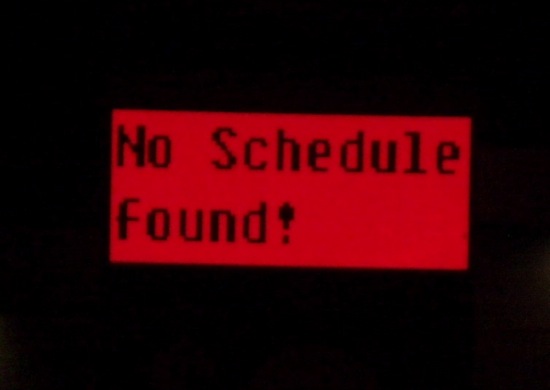 I think it read the same the whole time I was in town.

Coming around the corner onto Las Vegas Blvd., I saw a corner of the MGM that isn’t really visible from other angles, and where there is a large lion statue: 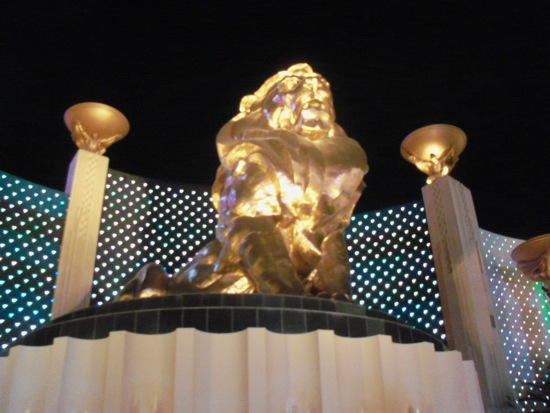 As John Linnell might say, “I pale before the monolith that towers over me.”

Across LVB is the casino New York, New York: 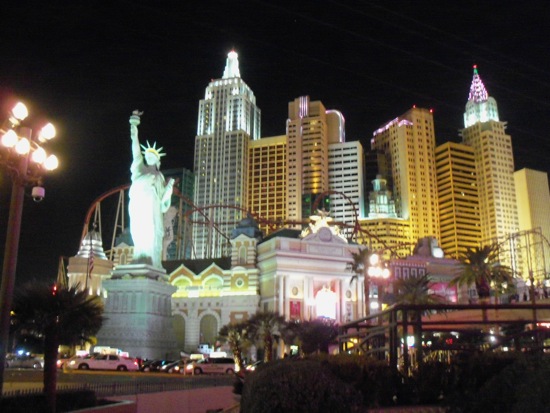 There’s your visual summary of the island of Manhattan.

Next I headed north on LVB.  Here’s a view up the street in that direction: 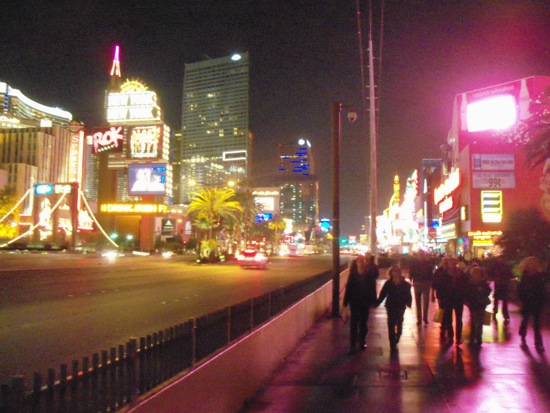 I soon encountered a guy dressed like Gene Simmons of Kiss, who was being photographed by others.  I went to take his picture, and he held up a sign saying that he appreciates tips for photos.  So I gave him a couple of bucks.  I would soon realize that there are a lot of such people on the Strip, some of them in pretty impressive costumes.  Anyway, here’s “Gene”: 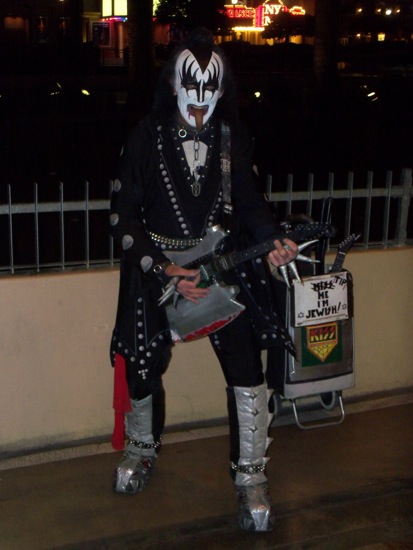 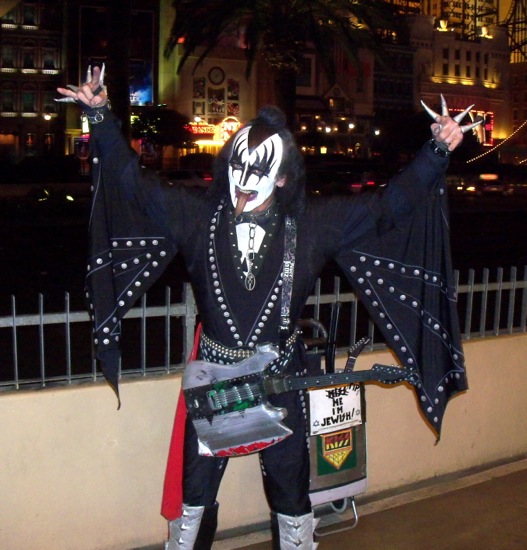 The sign in the background reads, in the Kiss font, “Kiss Me, I’m Jewish!” 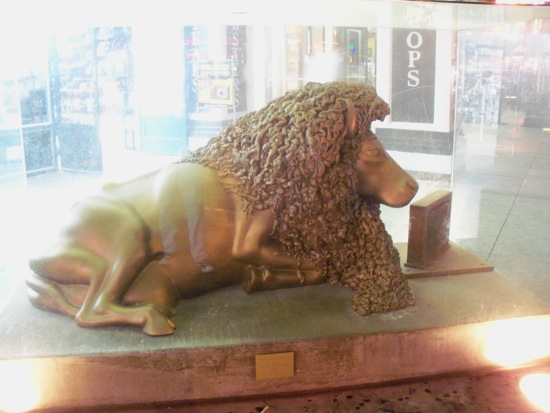 The casino called Paris has this balloon: 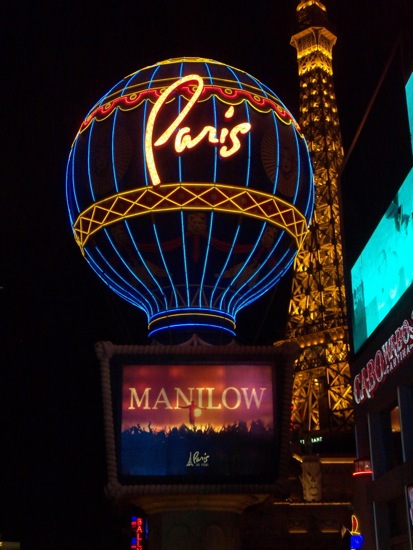 And some sort of tower: 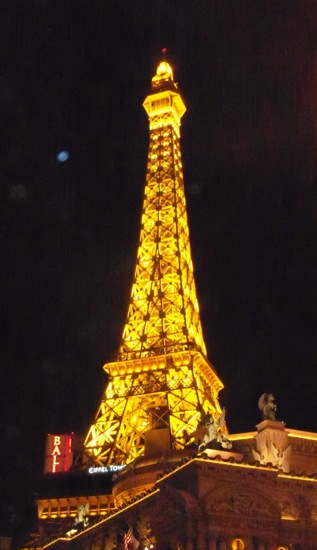 That thing seems sort of familiar…

The Harley-Davidson Cafe has an unsurprising theme to it: 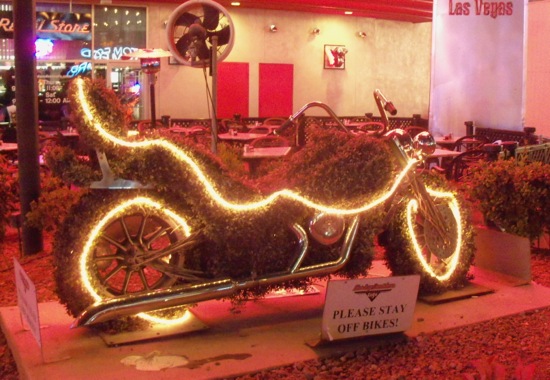 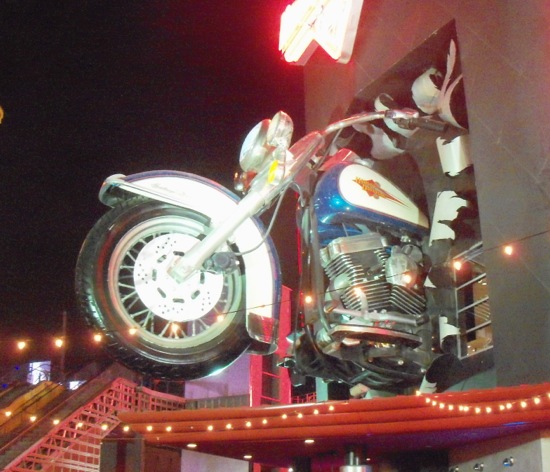 I ran into several more costumed folks, most of whom I didn’t take pictures of because I didn’t want to tip them.  However, I couldn’t resist when I ran across a stormtrooper.  When I handed him some money, he said “You wanna be in the picture?”  So he handed me a lightsaber, and I handed my camera to another passerby to take pictures.  Unfortunately, the passerby didn’t wait for the camera to focus: 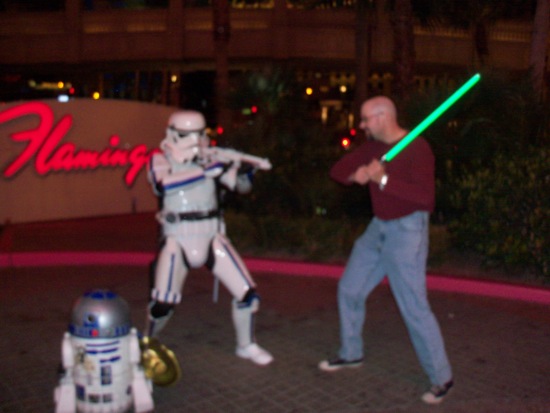 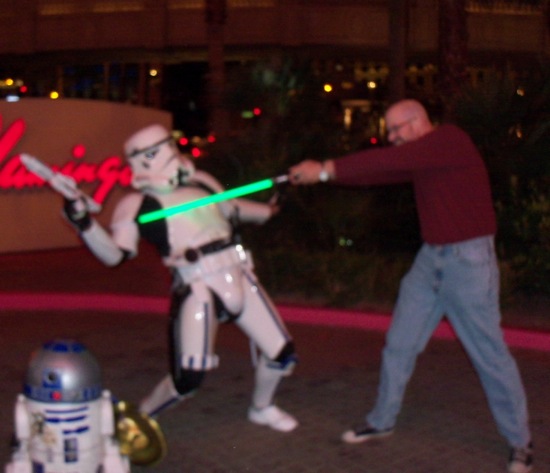 Besides the costumed people, there were also occasional regular panhandlers.  One of them I gave money to who had a cat with her, sitting in a short sack – the cat looked like it might be recovering from injuries, as it seemed to have bandages around its midsection.  I didn’t ask what was up with the cat, but thought later that I should have.

Continuing up the street, I came to the Venetian, which has a “canal” with gondola rides: 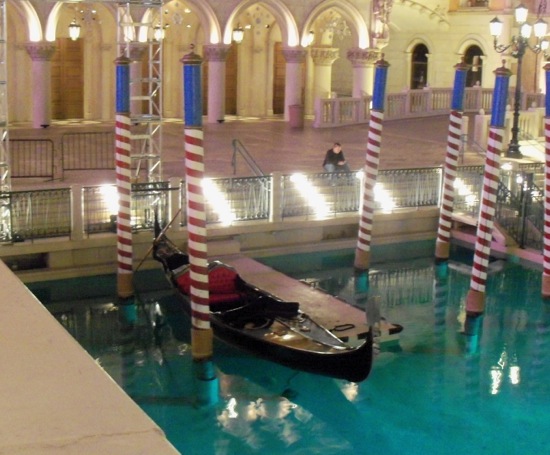 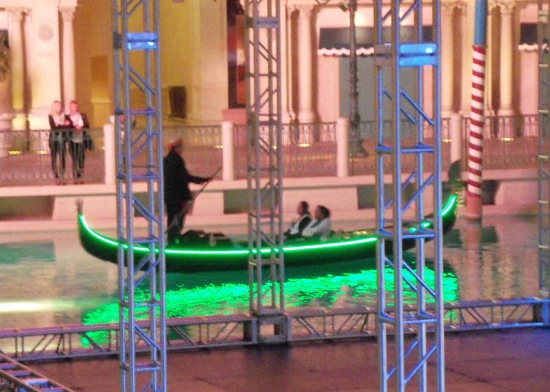 They also have a fancy fountain: 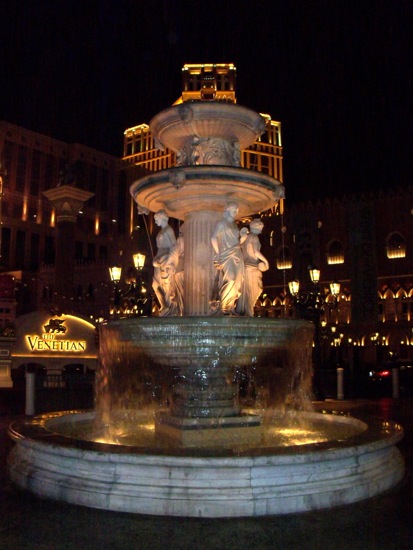 In Vegas, even Mickey D’s is glitzy: 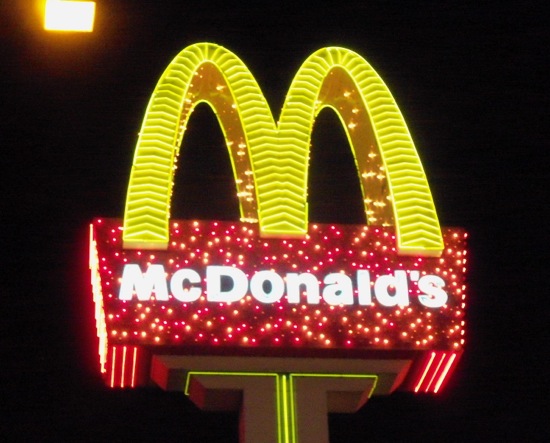 Also, while there aren’t many billboards on the strip, I couldn’t fail to notice this one: 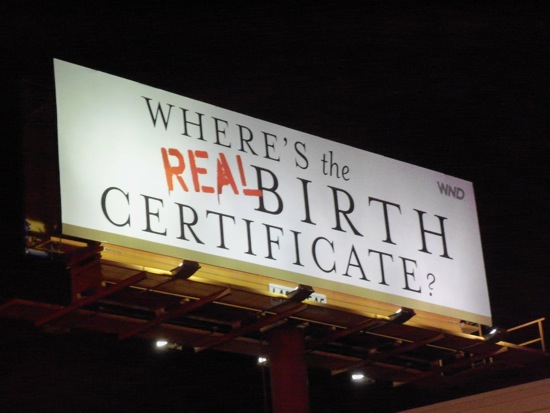 Courtesy of the website World Net Daily (no link, as I don’t really want to send them the traffic).

Another thing you run into a lot on the Strip is these people: 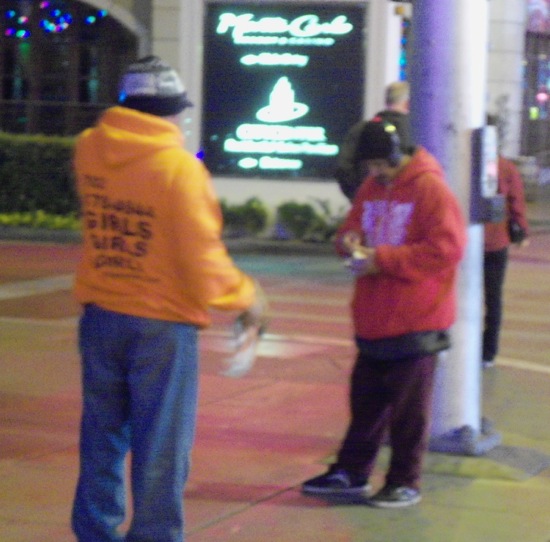 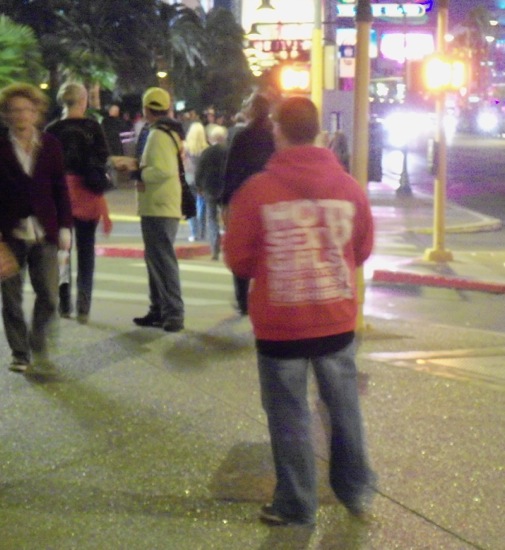 They have shirts saying things like “Hot girls direct to you in 20 minutes”, and they attempt to hand out cards or flyers to anyone walking by.  If they have cards to hand out, they make noise with them such as slapping one card against the rest of the stack before proffering it, or flicking the card edge with a fingernail as they hold it out.  I assume the noise is to get people’s attention.  Curiously, none of them say anything to passersby, though a few times I heard a couple of them talk to each other, or on a cell phone headset (these conversations always seemed to be in Spanish).  I didn’t take any of the cards or flyers, but I’m assuming that these are for escort services or the like (prostitution is legal in Nevada, after all).  The workers who do this (mostly men, but there were some women) are pretty expert at hitting just about everyone on the sidewalk moving around a lot to get people going in both directions (the constant motion is why my pictures of them tended to be blurry).

As I got near the Northern end of the Strip, I saw the casino Circus Circus (which I’ve heard of before): 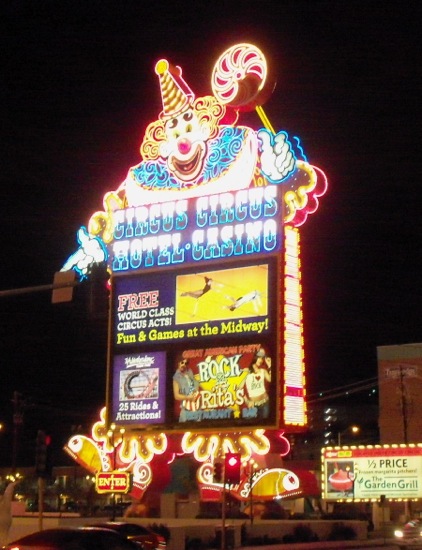 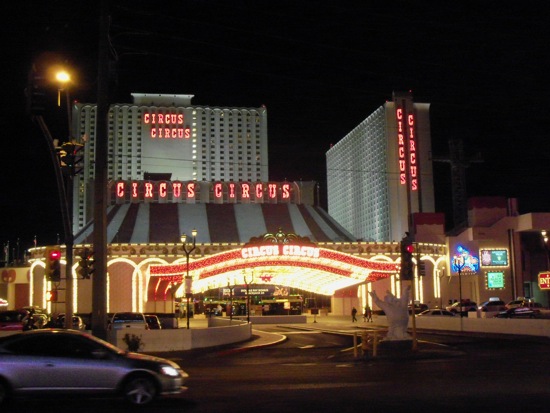 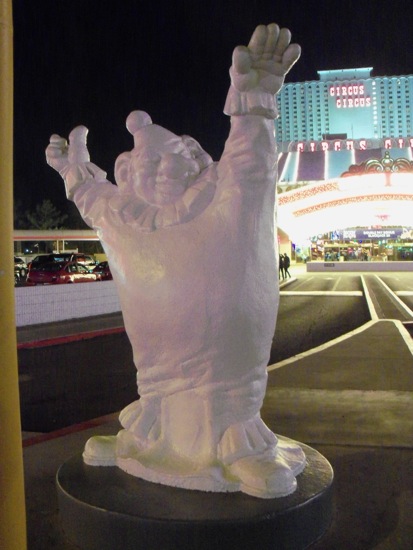 Sometimes I wonder how the themes for different Vegas establishments originated.  I suppose I could look at the websites of the different venues at some point (I haven’t been linking them all here simply because I’m lazy, but they should generally be easy to search for).

Not long after this, I came fairly close to the Stratosphere, which looks like Seattle’s Space Needle: 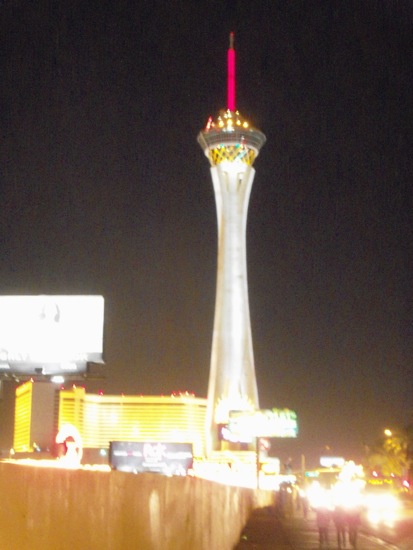 At that point, I think I was near the end of the Strip, and started heading back south.

I took more pictures of other things on my way south, which will be detailed in my next post.  Stay tuned.