The conference I was attending had useful presentations and discussions during the days, but on the Tuesday evening, there was to be something called the “Client Event”.  There had been no information published in advance about what went on there, and when I asked some people about it, I found that the content of this event is normally kept secret each year at the conference.  What I was told was about some of the past ones, many of which had been concerts with surprise performers.  The conference materials did indicate that it would be a concert, and that there would be 2 headlining acts, plus a house band.

News did leak out about the bands, though.  Just a few hours before the concert event, I was talking to a trainer (who shall remain nameless), who told me that supposedly the acts would be Styx and Sammy Haggar.  I was excited to see the former (not so much for the latter).

I got to the concert during the house band’s first set.  This was a group called Liquid Blue (note: a video will start to play automatically when you load their website) who do covers of all sorts.  They were pretty decent, though not super interesting.  I eventually made my way near the stage, hoping to be close by in case Styx were the next act.  Here’s a pic of LB just as they had finished a song: 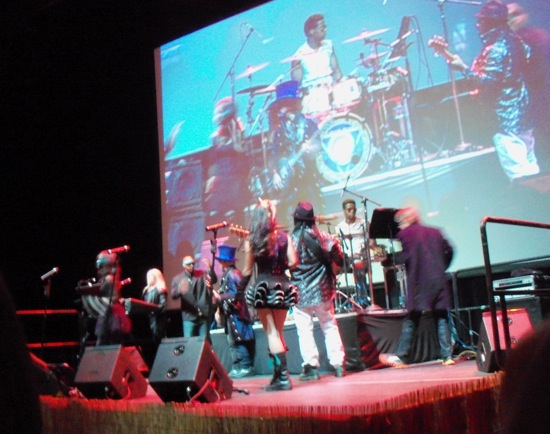 When they finished their set, the video screens, had the Styx logo appear on them, and the crowd moved over to the larger stage near this small one.  I ended up in the front, but over on one side, as the band came out.

Here’s the crowd, just as excited as me, I think: 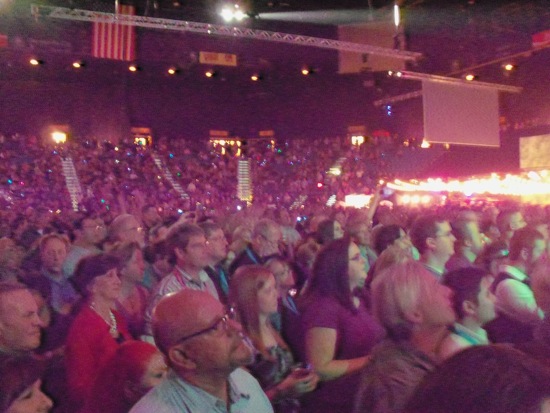 Eventually, I discovered that the current incarnation of the band only contains 2 of the members I know from the ’80s.  Here they are – Tommy Shaw (left) and James Young (right): 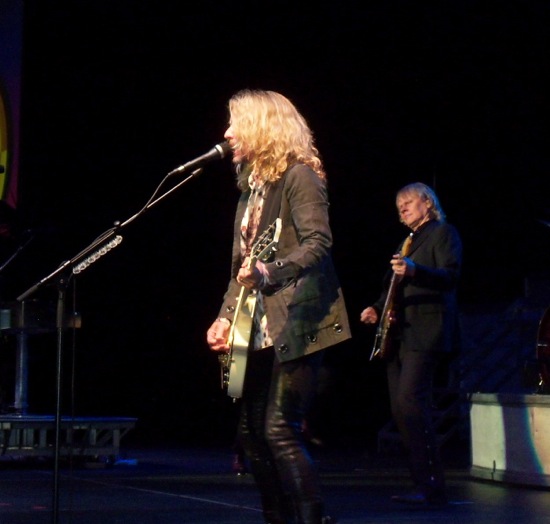 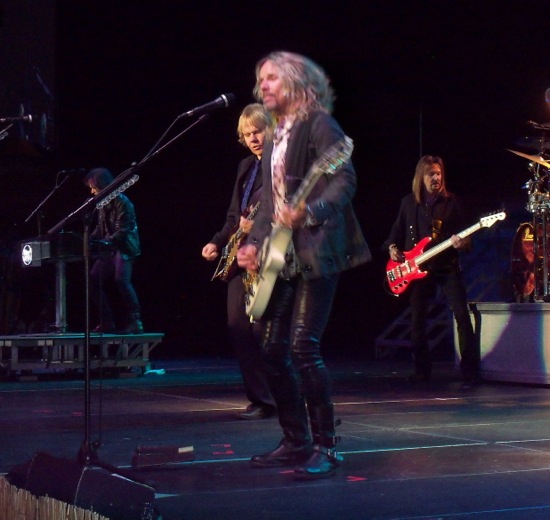 Flailing away on the drums is Todd Sucherman: 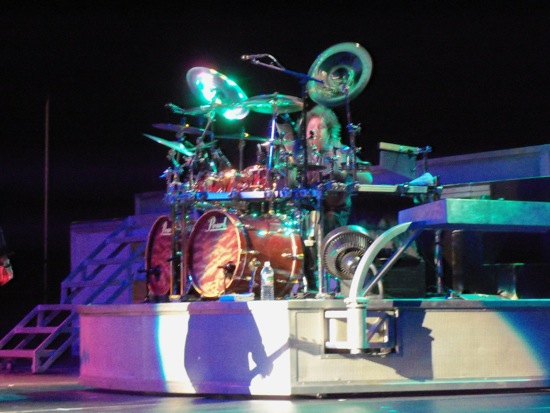 This is current bassist Ricky Phillips: 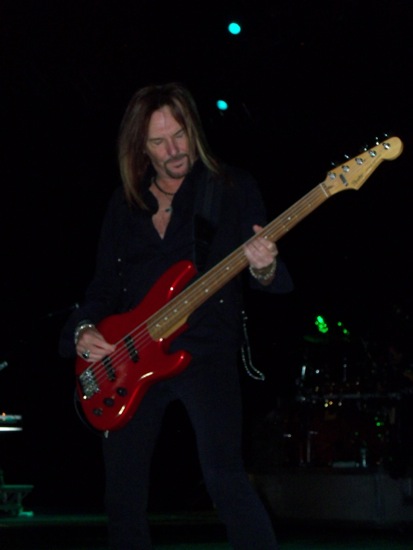 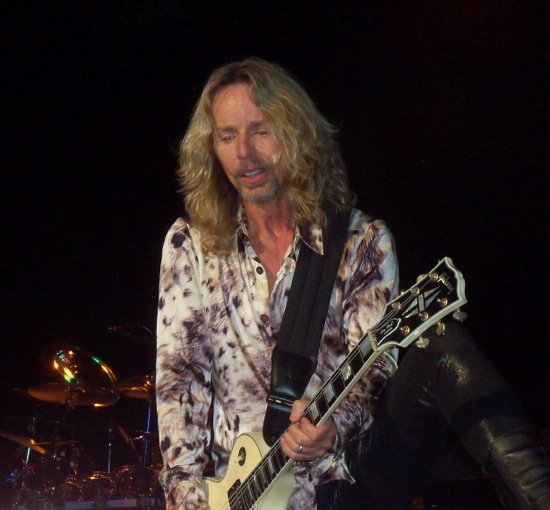 On the left below is the keyboardist, Lawrence Gowan: 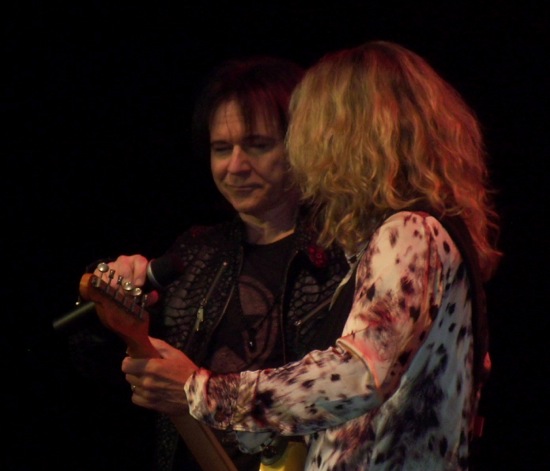 He sang lead on several of the songs, with others led by Shaw. 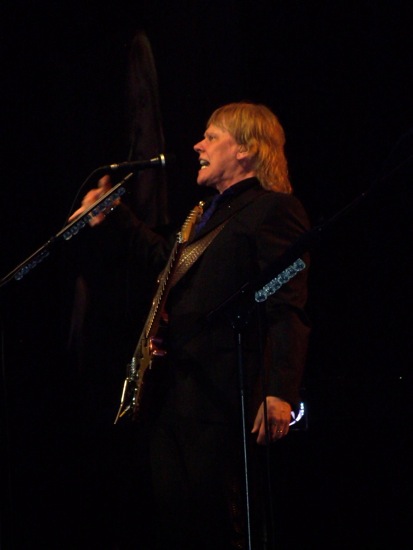 Lawrence at the keyboard (which he was able to spin completely around on its stand): 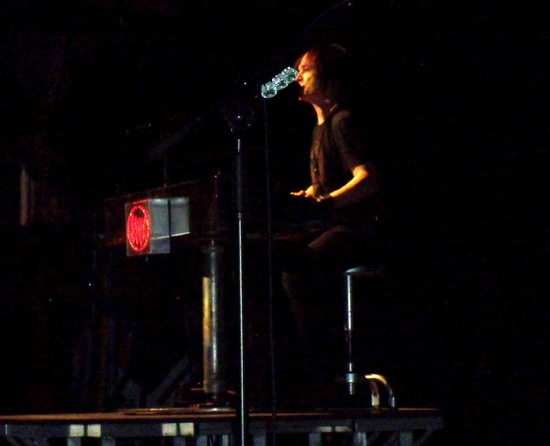 For a few songs, the band brought out its original bass player, Chuck Panozzo, who doesn’t perform with the band too much because of his health: 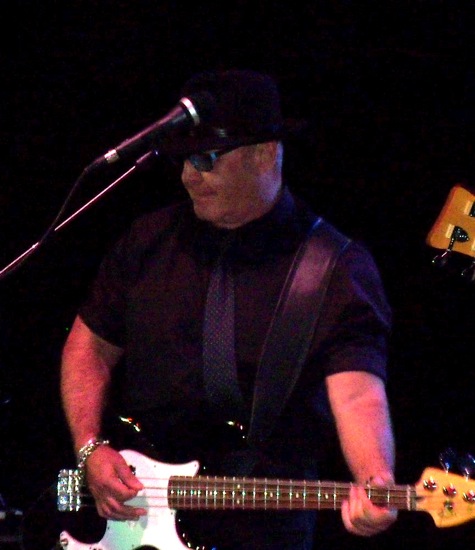 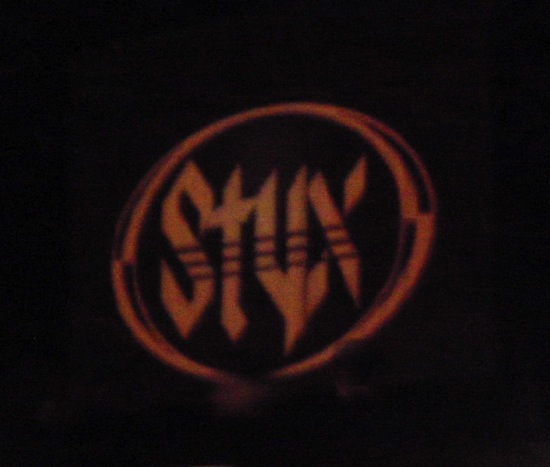 I had a lot of fun seeing them, as I’ve liked their music since I was a kid, but never saw them in concert before.  Songs they played included:

After Styx left, Liquid Blue came back for another set, and I made my way to the seating area farther from the stage, as my feet were still hurting from walking the Strip the night before.  During this LB set, there were various odd (and kind of lame) computer animations playing on the video screens in the arena: 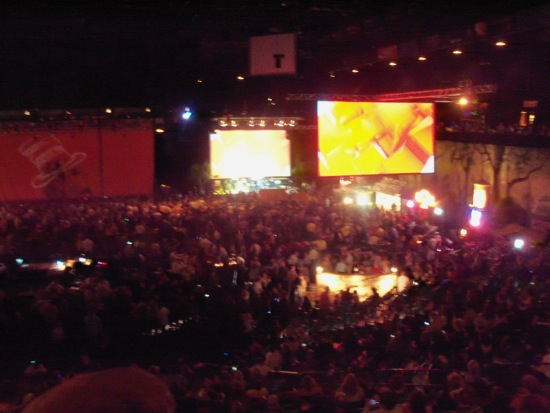 I stayed in my seat when Sammy Haggar came on stage, as I’ve never been a really big fan of his.  Mostly the only music I know by him is from his years with Van Halen.  He did do a few VH songs, unsurprising since his stage band included Michael Anthony, the bassist from VH.

One interesting thing about the stage setup was a platform on which several fans from the crowd got to stand during the performance: 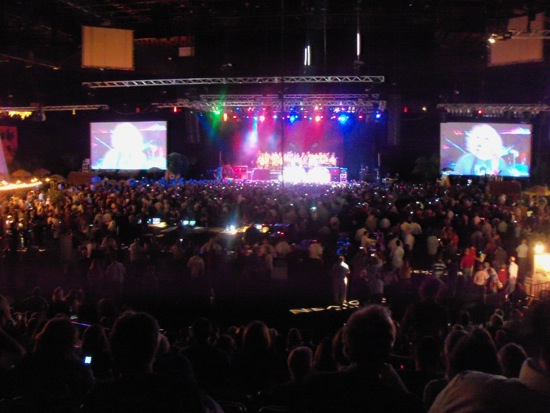 You can see them in the center of the stage.  The musicians are in the spotlights below that. Since I was so far from the stage, I mainly watched the screens, which usually were showing Sammy. 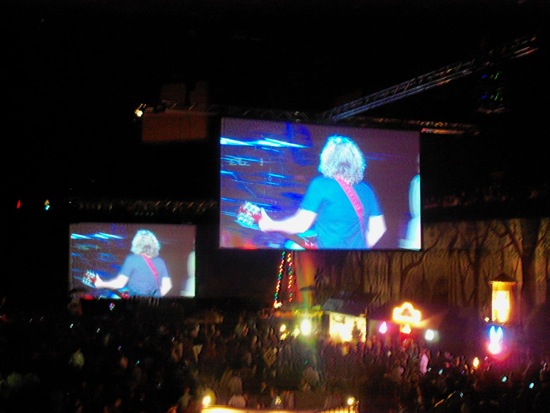 I stayed until the end, only somewhat appreciating the Haggar set.  He finished up just after midnight, and I headed back to my room to get some sleep before the last (half) day of the conference.