In May I participated in the Northampton LGBT Pride parade with a group from work for the third year in a row.  This year the parade route went a different direction than it had previously.  Instead of progressing into downtown, with the rally in a parking lot there, the parade started downtown and went out to the 3-county fairgrounds (which I had not been to before).

I biked over to Noho for the event, getting there later than I intended, as I got a flat tire on the way (fortunately I had a spare tube with me and was able to change it fairly quickly).  I still managed to meet the group in the staging area before we had to step off.

Here is the view as we had just started, and were headed up the hill to Main St.: 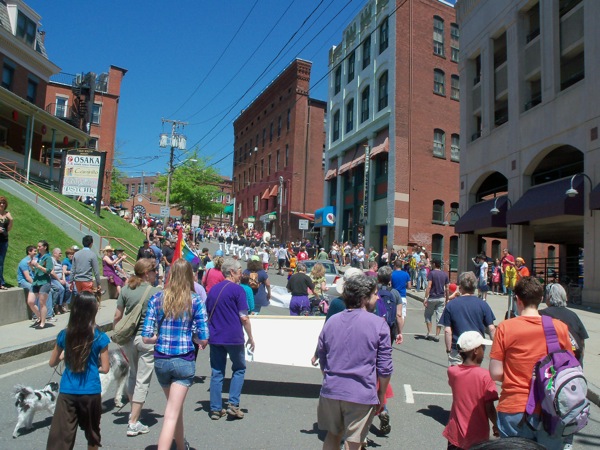 And the crowd on Main: 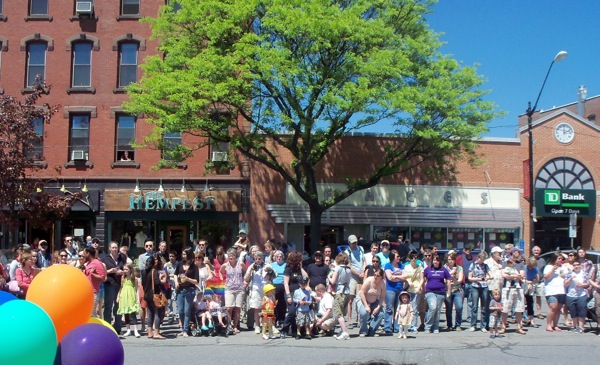 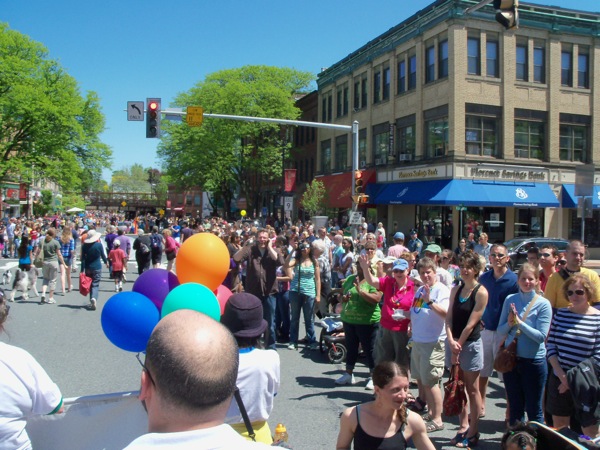 Some folks were watching from the bike trail bridge: 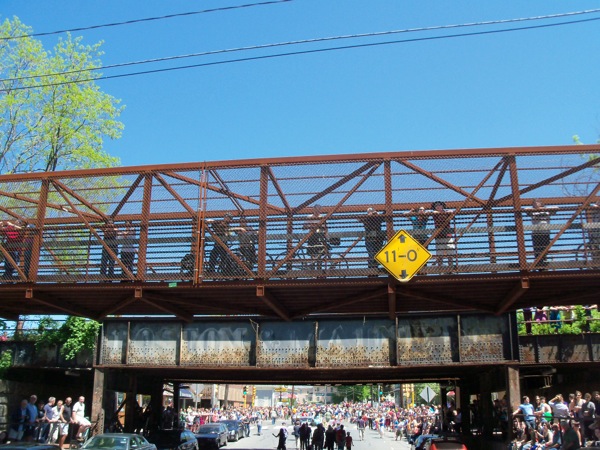 The crowd is always thickest right in the downtown blocks.  It certainly thinned out as we went on, but was still pretty decent: 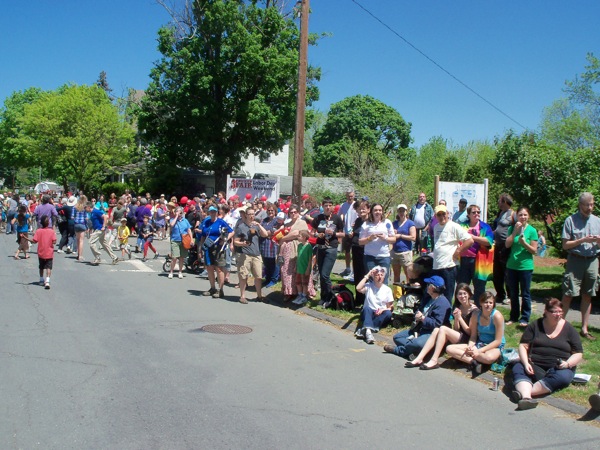 There is a walking path/driveway that we followed down from the street into the fairgrounds, where we were greeted by this balloon arch: 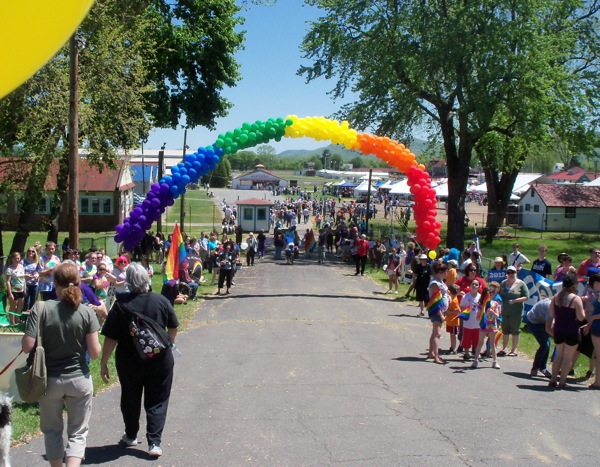 I ended up carrying one end of our banner for most of the parade.  Here is a pic someone took of me in the act as we reached the end: 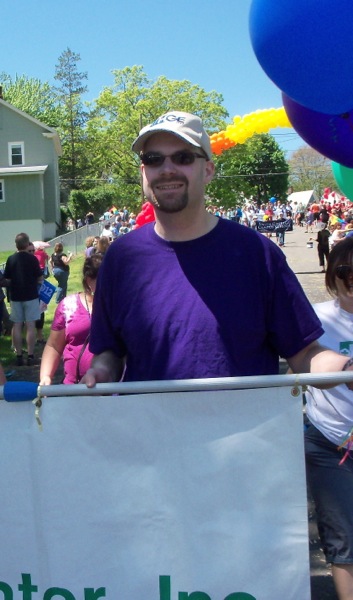 The group of us having finished the parade: 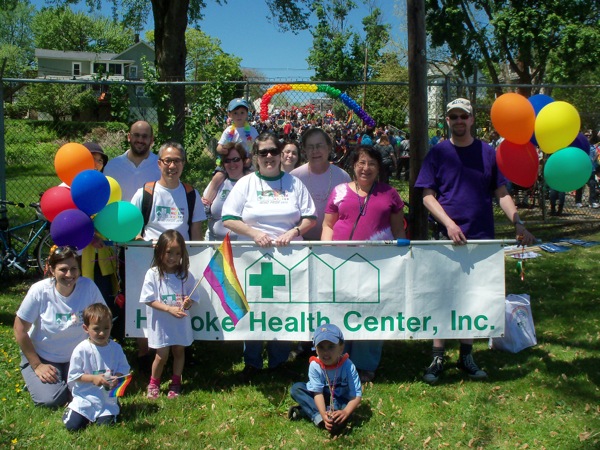 I hung out at the rally for quite a while afterward, wanting to see a couple of the speakers.  One of whom had a booth there: 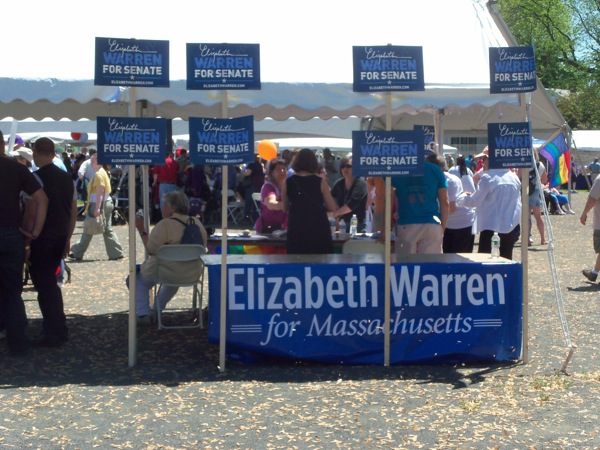 Yes, I’m into Elizabeth Warren.  I had thought about wearing my Warren for Senate t-shirt that day, but it was in the laundry.

This was the stage for the speakers and performers: 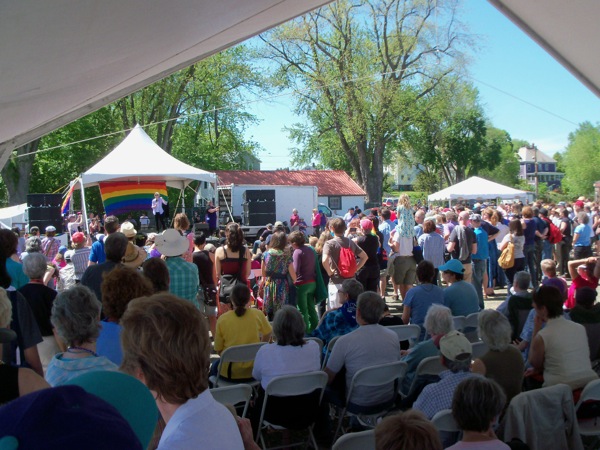 And that is Dr. Warren herself on stage: 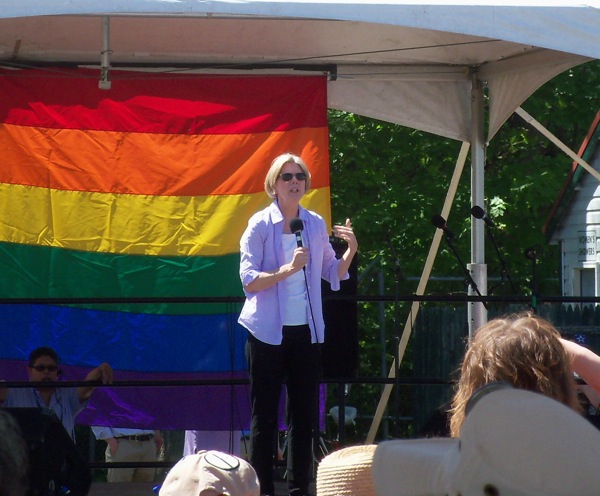 She was a ways into the lineup, after the mayor’s proclamation, a few musical performances, and an invocation.  Her speech was short, and touched on the same sorts of things I’ve heard her say in videos, but it was still neat to see her speak in person.  Also cool was getting to see another guest: Holyoke  mayor Alex Morse, whom I’ve written about before.

The musical performances I saw ranged from decent (gay men’s chorus) to oddly lame (Little Mermaid lip-synch, which admittedly was plagued by technical problems).  It was also a hot day in the mostly cooler days of early May this year, and it was very nice that there was a tent I could stand under to watch the proceedings.

After leaving the rally I biked home without incident, stopping off at my local bike store for a reason that will be detailed in my next post.