Those in the know (and to be in the know, you only need to have read this page) will be aware that I turned 40 last month.  I had been thinking for a while about a special way to celebrate, and I decided that, given my increasing bicycling prowess, that I should take a long bike trip.  So, I took a long weekend and rode to Boston and back.

I had to prepare for the trip by getting some luggage that would fit on the bike.  A backpack wouldn’t hold enough stuff for a weekend, and I ideally didn’t want to be carrying stuff on my back anyway, as that would make me tired and sore sooner than necessary.  After looking around in local bike shops, and then finding cheaper stuff online, I ended up getting this set of bags.  The 3 bags held plenty of things, and the top bag can be used as a backpack, so it’s good for walking around without the bike.  I also mapped out directions online and printed them out.  It’s true that my phone can look up maps, but you never know when you’ll be lacking signal.

I headed out from my house in Hadley on Friday, June 8, about 8:45am.  For the first 1.5 hours or so, the ride was familiar, as I headed through Amherst and Belchertown into the town of Ware, climbing some good-sized hills on the way.  Before getting to downtown Ware, I passed this marsh, where one can often see herons, and that day was no exception:

I stopped briefly to rest in downtown, and put on sunscreen (it had already been sunny, but there were several shady areas).  At this point, I was about to head into unfamiliar roads.

I headed north out of the town center, then started bearing northeast, coming to state highway 32.  There I saw this pond: 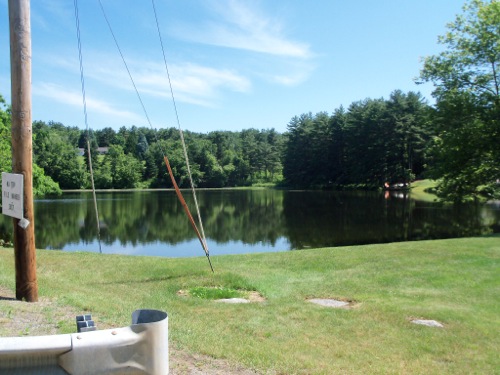 and just past the pond was the next road I was supposed to ride on, heading east.  However, that road had a “Dead End” sign at its beginning, so I thought it probably wouldn’t help to go that way.  Instead I consulted the direction sheets, which had some small maps of various stages, and elected to head further north on 32 before taking a more major side road.

I found the road I wanted, headed east (and uphill), and before too long was back on my official mapped route.  I made my way through the town of New Braintree, which involved more hills, and then followed an odd route toward the center of the town of Oakham (odd because I had to keep turning at various intersections, but the name of the road I was on always was the same).

After Oakham center I got to do some nice downhill riding for a while, then passed by Rutland state park and into the town of Rutland.  Here is some nice waterway by the park (looking to either side of Route 122): 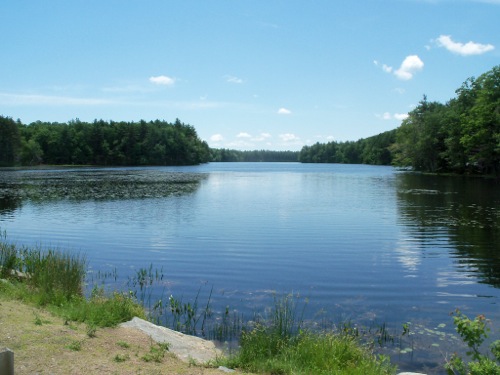 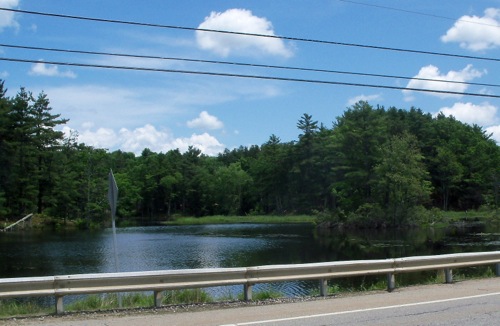 I had to head up a longish hill after the park (on Route 122A), and my legs were starting to feel weak.  At this point, I’d been on the road for about 4 hours, and was in need of a longer break.  I pressed on, having a couple more slow climbs as I headed into the next town, Holden, where I was planning to stop for lunch.

I did get lunch in Holden, at a place called Ethan’s.  I allowed myself plenty of resting time, staying there for an hour and 15 minutes.  It was 2:45 when I got on the road again, and while there was still sun shining, a good bit more clouds were in the sky.

I rode out of Holden on some residential side streets, passing into the town of West Boylston.  Here I encountered the Mass Central Rail Trail – that is, one of the few sections of that trail that has been built.  I rode on this trail section for its 2.5 mile length, and was surprised to find that much of it is not paved – it’s hard-packed dirt.  Still, it’s a nice trail, with a couple of bridges over creeks: 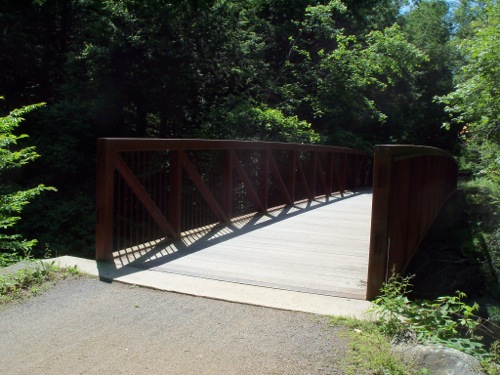 Here’s a waterway that flows near the trail: 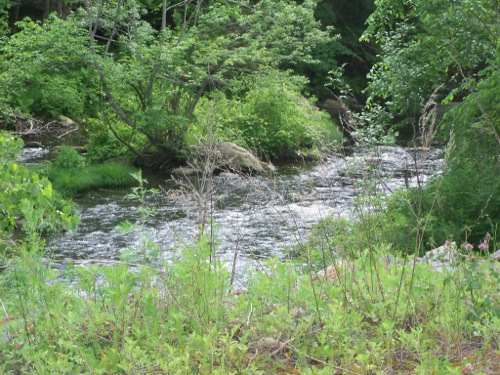 And the trail passes underneath Interstate 190: 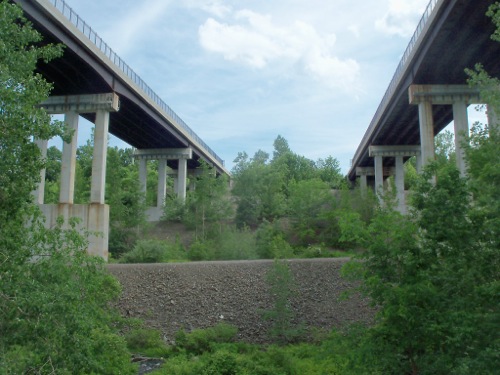 After leaving the trail, I headed into the town of sterling, as the sky became overcast, and I started to hear thunder.  A chance of storms had been predicted for the late afternoon, so I had brought a poncho for myself and a rain cover for the luggage.  Pretty soon it started to sprinkle, so I put the rain cover on the bags and continued.  Just after I passed Sterling center, rain started to fall more earnestly, so I put on the poncho and kept going, heading east on highway 62.

The rain got really heavy just after I put on the poncho, and it was getting hard to see.  I saw a garden store/nursery on the side of the road, and pulled off to wait out the worst of the rain under their generous wooden awning.  They sold bottled water, and I was just about out of water, so I refilled there.

After about 20 minutes, the rain stopped entirely.  I continued into the town of Clinton, still wearing my poncho to help dry it out.  I made my way a bit northward again, and got up to state route 117 in Bolton.  This was the road on which I’d spend the most time that day – it made up more than a quarter of my mileage for the day.

There were some hills to ride up on 117, but overall it was a pretty quick ride.  In Bolton it took me past the outer beltway of the Boston area (I-495), and through a number of other towns (including Concord and Sudbury).

Eventually, I passed over the inner beltway (I-95) and headed into downtown Waltham.  Here I was able to go a few blocks down to the Charles River, and start riding on riverside bike trails toward the city.  The trails were a little hard to follow, though, as the directions indicated changing sides of the river several times, but there were often trails on both sides, so it wasn’t always obvious where the turns were.  While heading along the trails, it was starting to get dark, so I put on my lights.  Eventually, I did get into Boston itself, and walked my bike on a footbridge over the turnpike, ending up near the Public Garden.  I rode over to Boston Common and called home to indicate that I’d made it.  It was just after 9:00pm.

I then went and had dinner at a nice taqueria, and after that, I and the bike caught a bus up to the city of Revere, where my hotel was (I’d gotten a deal on the place online).  I took a much needed shower and went to bed.  Total riding for the day was about 97 miles or so.

Next: what I did in Boston.