Blog : Whales of a Time

Whales of a Time

The second half of my birthday in Boston involved a lot of aquatic life.  After having lunch I headed to the waterfront, and the New England Aquarium.  I had bought a combo ticket in advance for the aquarium itself and a trip on their whale watch boat.

The aquarium had a new exhibit (though the whole place was new to me, as I’d never been there before) – a touch tank.  That is, you could stand by the side of a big, shallow tank, reach in and touch rays and small sharks.  There were a couple kinds of each swimming around in the tank. 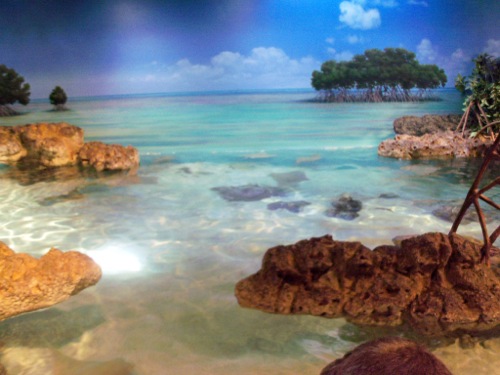 If you can’t tell from the photo, the background is painted on the wall.

Here are some of the rays: 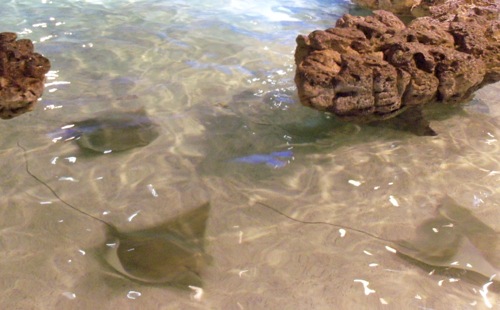 Those are cownose rays, which I got to touch a couple of (you’re only supposed to touch them on the middle of their backs – otherwise you might freak them out).  I also touched a bonnethead shark and an epaulette shark (for them it was more like petting a cat).  All of these animals are about a foot or so long, I should add.  It was pretty neat – the rays felt pretty slimy, whereas the sharks were rougher.

Moving into the main part of the aquarium, there is a large central tank that takes up multiple floors, and on each level there are smaller tanks around the periphery.  Below the ground floor are various kinds of penguins: 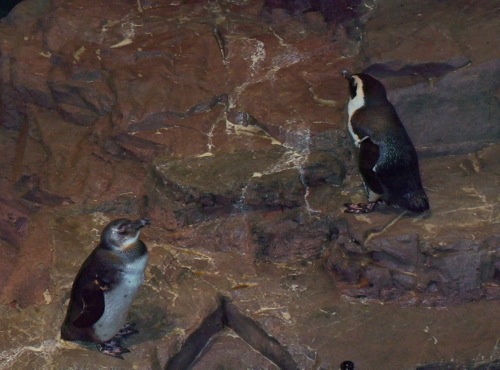 They have a lot of rocks to sit on, surrounded by water for swimming. 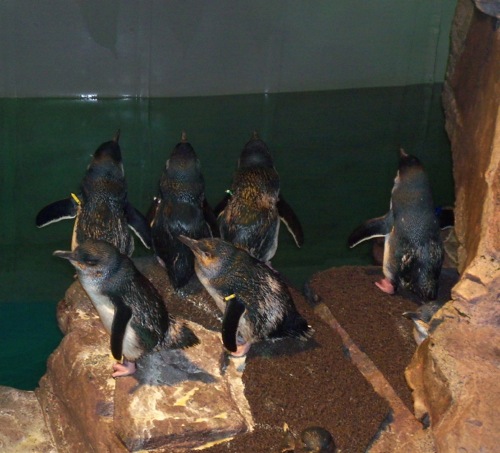 Before heading up the various levels, I took a detour to the seal and sea lion area: 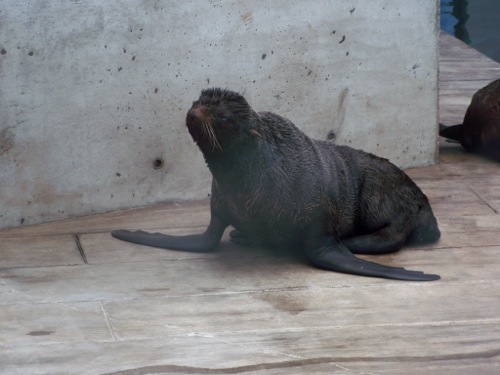 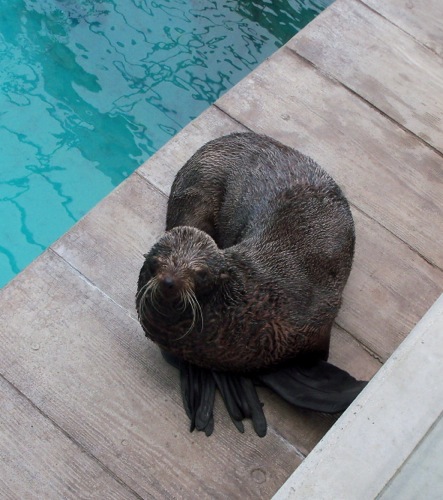 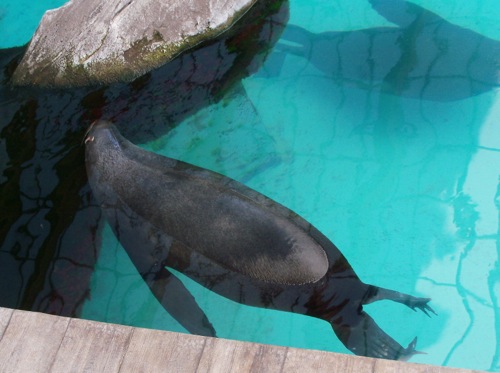 I then made my way past various tanks on my way upward.  Some highlights included the sea dragon tank: 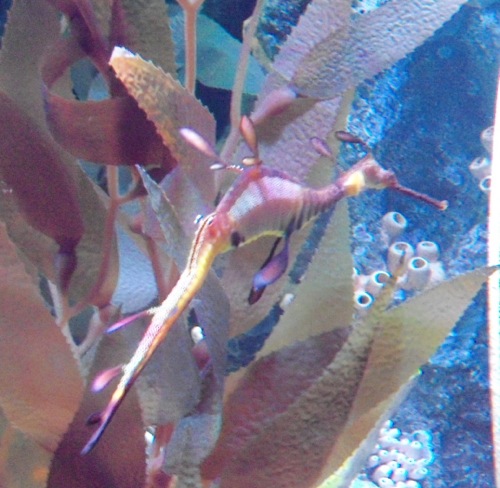 At first I thought this next one was a piece of seaweed floating around.  That would be its camoflage: 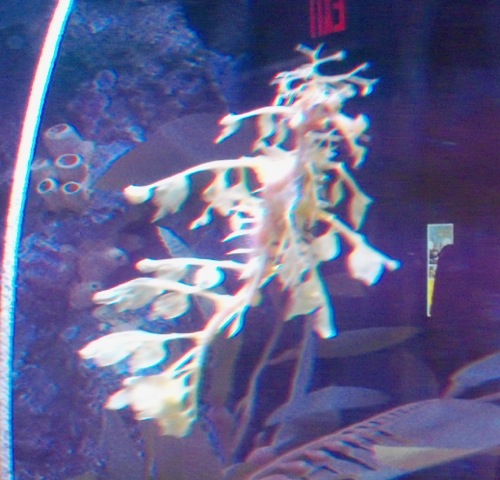 It was hard to get a good picture, unfortunately. 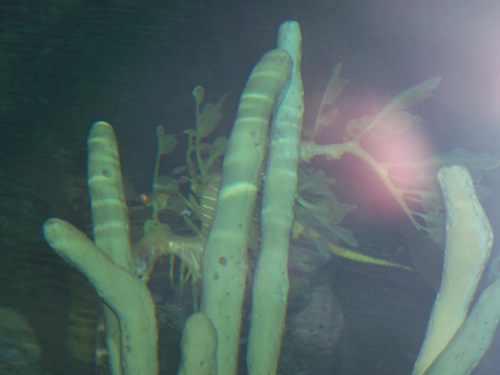 When I got to the top level, I was able to look out over the surface of the large ocean tank.  They have a big, fake coral reef in the middle which goes up to the surface.  I saw (but failed to take a picture of) a moray eel swim upward and (mostly) hide itself among the convolutions of the reef, then sit there with its mouth opening and closing, as morays are wont to do.

There was an aquarium employee at the top talking about the big tank and some of the animals in it.  In particular, it was mentioned that their large green sea turtle (named Myrtle) is about 80 years old.

As I headed down the spiral walkway along this tank, I got a good view of Myrtle, just after she’d come to rest: 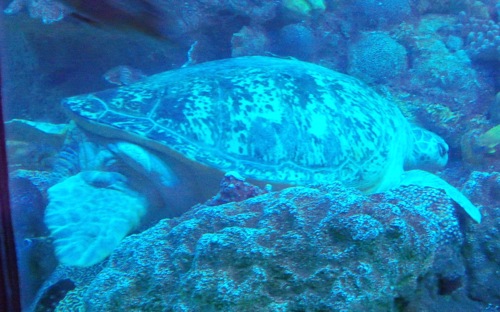 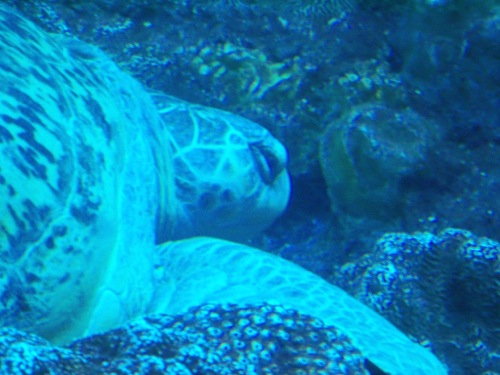 When I finished going through the place, I headed outside to line up for the whale watch.  It was an early evening boat trip, starting at 6:00.  Here’s the aquarium as seen from the boat: 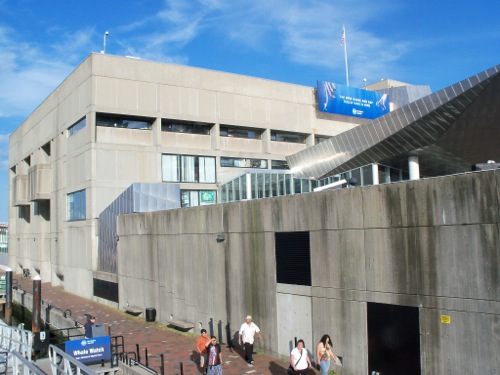 And looking back at the building once we got underway: 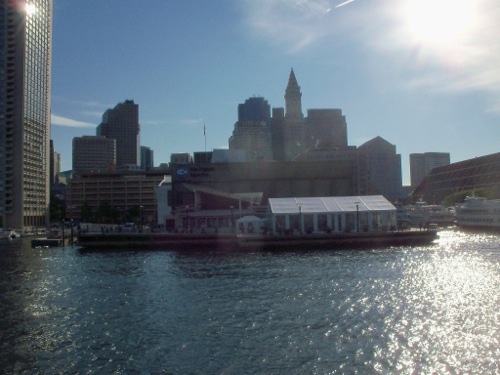 I had figured that the boat ride would be chilly compared with the city, especially as it was so late in the day.  So I had worn jeans instead of shorts for the day, and brought a long-sleeved shirt in my backpack.  I’d been hot at points earlier, but dressing warmly was well worth it once the boat got going (with its attendant wind).

Here’s a view of the harbor once we were a ways out: 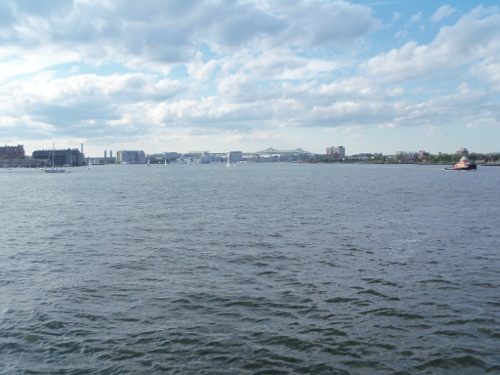 The boat headed about 30 miles east from the harbor to get to whale feeding areas.  We remained in Massachusetts Bay the whole time, and at our farthest point out we could see the tip of Cape Cod just to the east.

The boat slowed down once whales were spotted, and a crew member called out whale appearances at various angles around the boat.  There were a number of appearances I couldn’t get on camera, as I wasn’t quick enough, or the whale was too far away, or other passengers were in the way.  But I got a few good shots: 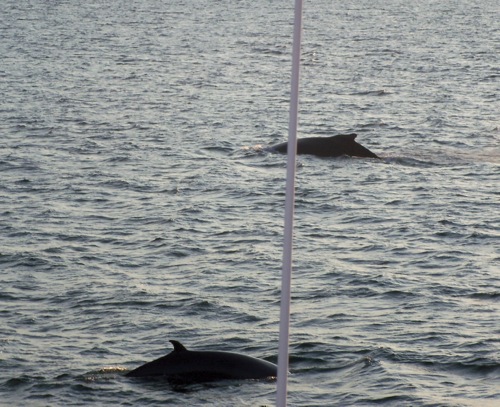 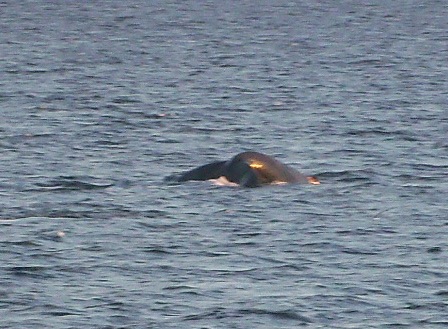 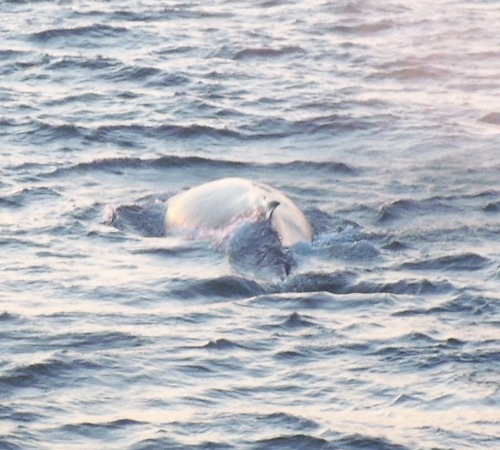 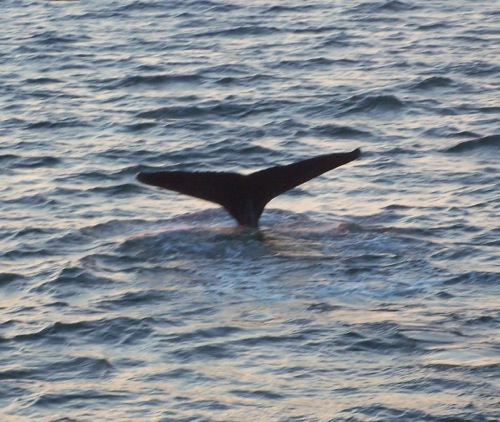 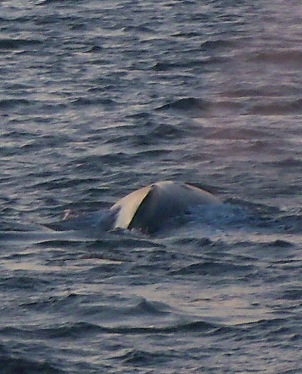 We saw 2 species: humpback and minke.

After about 45 minutes in the whale area, the boat headed back, and soon the sun was setting ahead of us: 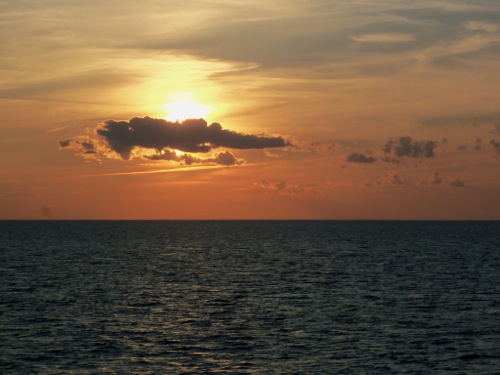 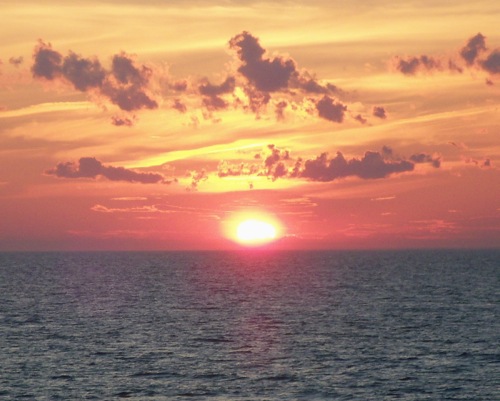 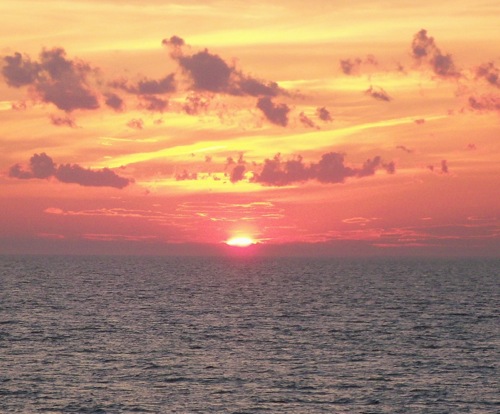 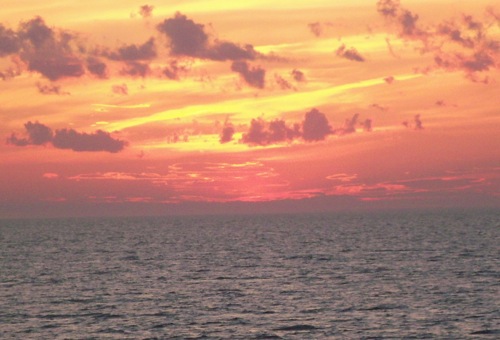 It was dark by the time we returned to the dock.  From there I hopped on the blue line train and headed back up to Revere, then took the bus to near my hotel (and walked the last few blocks).

Next: the ride home.