Blog : A Soggy End to an Otherwise Nice Day

A Soggy End to an Otherwise Nice Day

Before I do my long post recapping the Food Bank ride, I have one more post about a training ride.  This one is also an organized ride, though – as I did the 2013 NCC Bikefest the weekend before the Food Bank event.

As I did last year, I registered to do the 72-mile route in Bikefest.  Fortunately, unlike last year, I suffered no knee problems.

It promised to be a sunny day, with no rain predicted.  I got to the start area with 15 minutes to spare, and I ended up having a little more time, as the ride kicked off 10 minutes late.

The route was the same as last year, so I pretty much knew what to expect.  It was sunny almost from the get go, so it wasn’t too long before I was able to remove my long-sleeved and long-legged outer layers.  I also impressed myself with my hill-climbing, as there is a long climb heading from Williamsburg up to Ashfield, and my clothing change was the only time I stopped while heading uphill.

There’s a long, fast downhill section that takes one to route 116 in Ashfield, and then another climb up toward the town center.  Once past that, there’s some ups and downs, but mostly downs, as the route heads east into Conway and then North up to Shelburne Falls.

The first rest stop is in Shelburne Falls, at the Lamson & Goodnow knife factory: 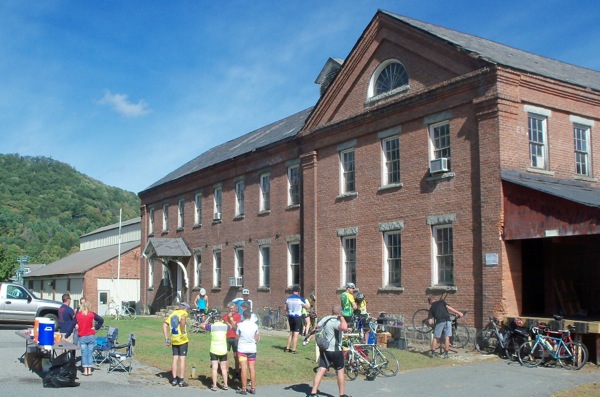 Here’s the view behind the place: 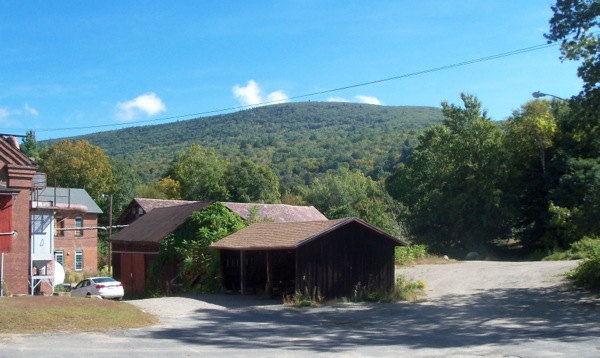 They had mini-muffins, which were a nice item to have for a morning break.

From there, I had no trouble with the little bit of climbing up to or on route 2, though the route goes through some more heavy hills on its way to Greenfield.  I had to rest a couple of times in this section.  There is some nice scenery up there, though: 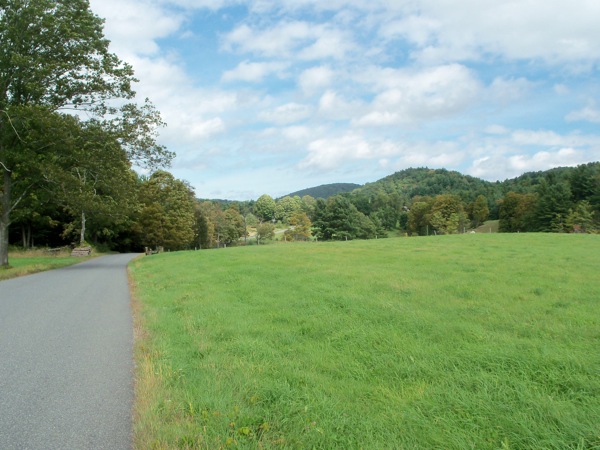 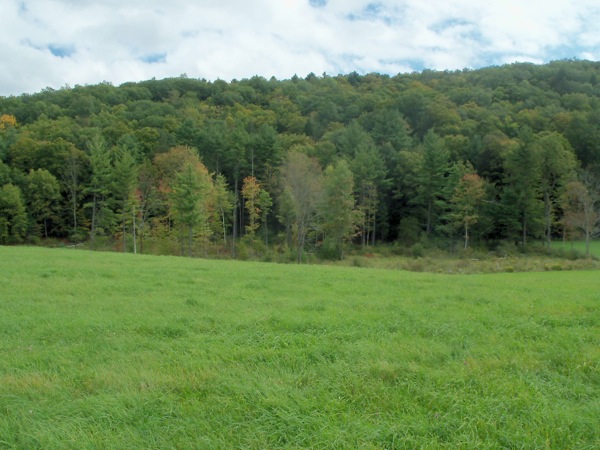 What also makes this portion a little dicey is that there are a few sections of downhill riding where one has to make some quick turns.  I had to lay on my brakes a bunch, especially for a long downhill section of road with a hairpin turn just as one is getting to Greenfield.

In Greenfield, we headed south, and quickly came to the second rest stop: 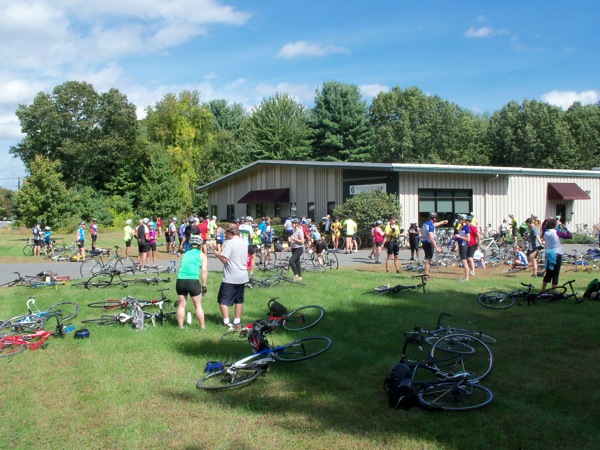 Complete with a bagpiper: 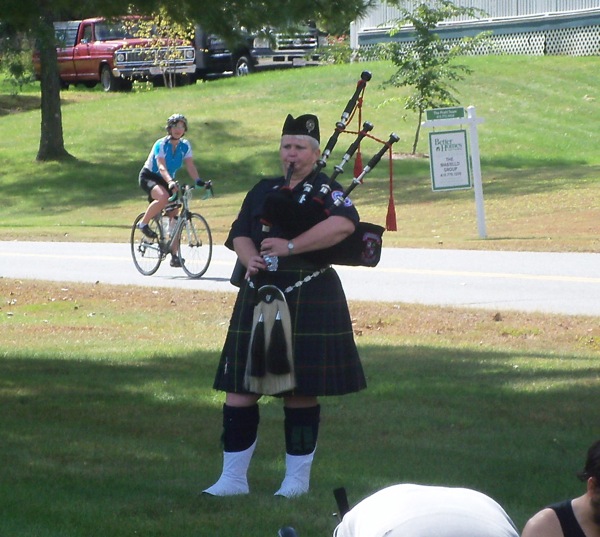 At this stop they had PB&J sandwiches, which I recalled from last year, as well as fruit and granola bars.

From that point on, there wasn’t much in the way of climbing to do, just distance to cover.  The ride does cover some more pretty areas, though, like the bike bridge over the Connecticut River (between Deerfield and Montague): 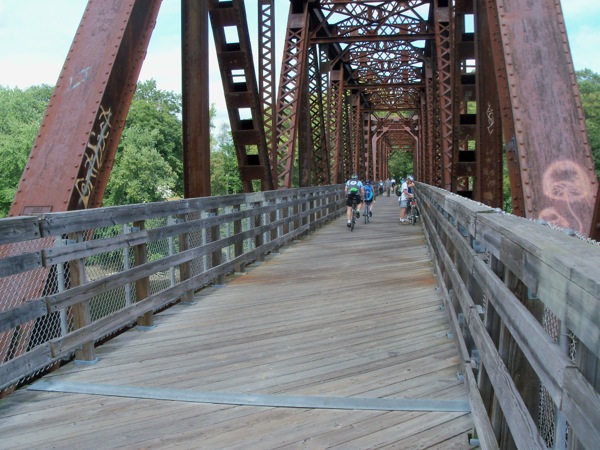 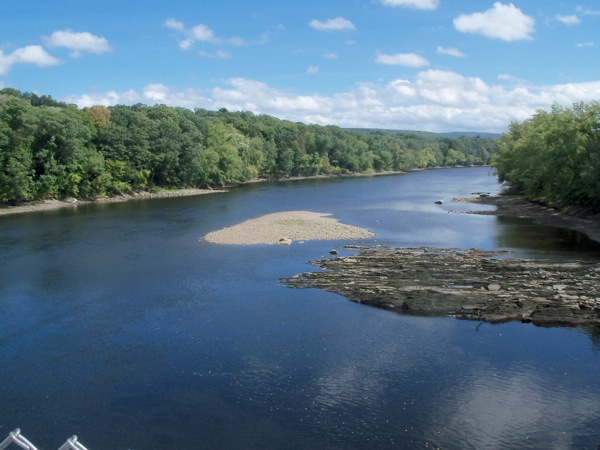 Last year, the third rest stop was in Montague, but they moved it farther along this year.  It was located in Sunderland center, just before we were to cross back over the river: 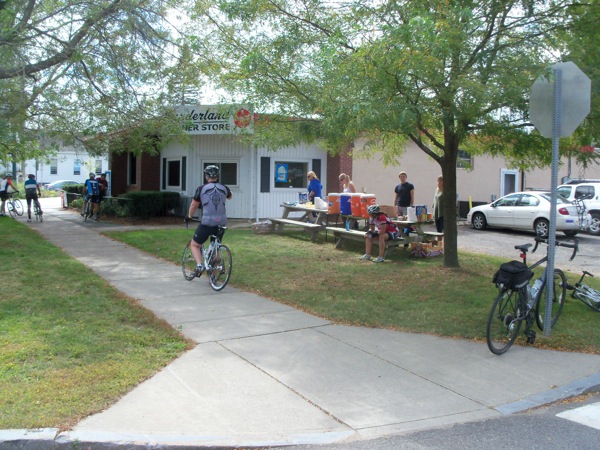 That location is right behind a convenience store, at the intersection of routes 47 and 116.  Food was the same here as at the previous stop.

I was getting a little tired and sore by this point, so I had to stop and get off the bike a bit more frequently, just to give myself a little relief.  Still, things were going fine as I headed down through Whately and into Hatfield.  I did notice that it started getting awfully cloudy, though.  Just as I was passing through Hatfield center, it started to drizzle.  I hoped that it wouldn’t rain any harder, but soon it started to do just that.  There was never a torrential downpour, but a steady rain started up and continued for 30 minutes or more.  It was down to a drizzle again as I headed back toward the beginning of the ride, and had pretty much stopped by the time I finished.  I was plenty wet and cold as I ate at the after-ride barbeque, and was really glad when I finally got home and could get in a hot shower.

Other than the rain, though, things worked out great, and I felt ready for the bigger ride to come.