A Tale of 2 Islands

In September, I went on my very first overseas trip.  I had left the US many times before this year, but always on trips to Canada.  In this case, I headed off for a 2-week vacation to Iceland and England.

The motivation for this trip was an event announced back in March.  Kate Bush, one of my favorite musical artists, who had not performed in concert since years before I’d become a fan, put out word that she would be giving 15 concerts in London in September (that number was later expanded to 22 concerts).  As I was already signed up for her site’s e-mail list, I received a code for a special pre-sale of tickets 2 days before the general public could buy them.  I got up early in the morning on the pre-sale day, and managed to snag one of the tickets (all the pre-sale ones sold out in 30 minutes that day, and then all the rest of the show tickets sold out in 15 minutes a couple of days later).  Once the ticket was in hand, I started to plan the rest of the trip around that concert.

In looking at flights to London, I found that Iceland Air offers “stopover” itineraries, where one can fly between Europe and North America, and spend a few days in Iceland on the way, for the same price as if one just had a quick layover in the country.  I decided to take advantage of that, and arranged to spend 5 days in Iceland and 7 in England.

The trip itself began at Logan airport in Boston (well, it more began with my getting dropped off at the bus station in Springfield, and then taking a bus to Logan).  Iceland Air appears to start their flights late in the day from there, as I arrived at the airport just about 3 hours before my flight, and their check-in counter was not yet open.

While waiting for them to open, I noted the display of many countries’ flags in the international terminal: 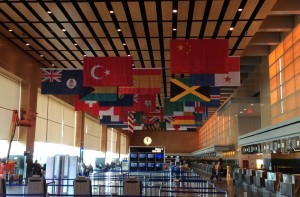 Once I got my bags checked, I headed into the security area, where they had this odd projection: 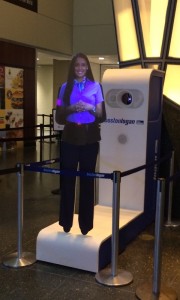 It was a video of a person talking, projected from behind onto a person-shaped screen.  I guess it’s kind of like a hologram, but I suppose it gets the attention of passengers, who might then be more likely to listen to the audio part of the recording (which was just the usual airport security guidelines).

The flight itself was like many domestic flights I’ve been on, except that I had a screen available to me on the back of the seat in front of me, on which I could watch stuff.  I ended up watching an Icelandic film called Metalhead, which was pretty good, if a bit depressing (but not as depressing as many Scandinavian films I’ve seen in the past).

Coming Next: my arrival in Keflavik.