I arrived in Iceland in the late evening, not long before midnight local time.  The international airport is not in Reykjavik, but about 30 miles southwest, in the city of Keflavik.  I had no trouble entering the country – the officer at Passport Control just looked at my passport, looked at me, stamped it and handed it back, without saying a word.  I had nothing to declare, so did not have to stand in a customs line after getting my baggage.  I headed to get on the bus that would take me to Reykjavik, thinking that everything seemed to be going very well.

The bus supposedly had wi-fi Internet access.  I got my laptop out of the backpack/bike bag and was able to get on the wireless, but could not seem to connect to anything online on the ride.  After a while, I gave up and put the computer away – and the zipper completely separated as I was trying to close the bag up.  As I tried to unzip it in order to get the teeth back together, the zipper pull itself broke in half!

Now, to describe this bag, it was designed to sit horizontally on top of a bike rack and the side panniers that were part of a set with it (I had brought the set with me because I was planning to bicycle  around part of the country).  The zipper went almost all the way around it.  It had straps on the bottom so that it could double as a backpack, but with the zipper not closing there was no way I could carry it on my back (and using it on the bike was suddenly very dubious, as well).

When we got to the bus terminal in the capital, I made 2 trips from the bus into the building, as I couldn’t hold that bag together and carry the other 2 I had with me (the pannier set being one of those 2, plus a large duffel).  Once I was inside the terminal and out of the rain (did I mention the cold rain?), I moved some items around in my bags.  In this process, the zipper on one of the panniers’ small pockets separated and broke its pull, just as had happened to the top bag.

After getting everything I expected to need for the next 4 days into the bike luggage, I took the duffel to the bag storage place in the bus terminal and paid to keep it there.  I then tried to lash the other bags closed, and grabbed a taxi outside to get to my lodging for the night.  I had booked a room in an apartment through airbnb, and managed to make it there without losing anything from my bags.  At this point it was close to 2:00am, and I had to be up early to go pick up a rental bike I’d reserved.

I got an okay night’s sleep, getting up a little after 7:00.  As I hadn’t had a chance to exchange cash, I could not take a bus downtown, so I went ahead and walked to the bike rental place (it was about 3 miles, so not too bad a walk).  Just after leaving the apartment, I saw this sculpture, just off in the grass by the residential neighborhood: 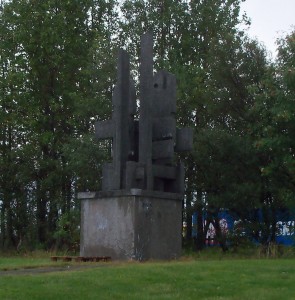 A lot of the sidewalks in the city seem to be wide asphalt paths that are also used by bikes.  At one point, I was even passed by someone on a moped using the path.

At a few places on the way downtown, I saw odd mushrooms: 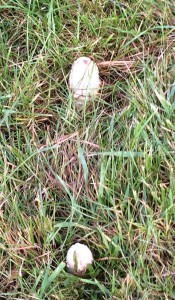 I also saw some interesting buildings: 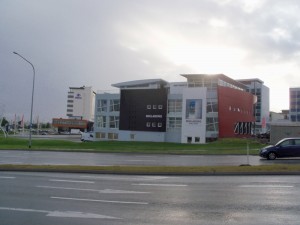 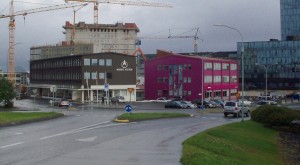 This place has a familiar business on the ground floor (you may want to click to enlarge the photo to see what I’m talking about): 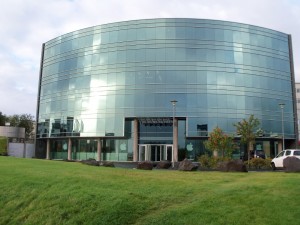 Here is a familiar brand at this place: 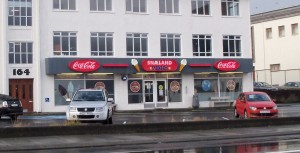 And a church with a familiar-looking name: 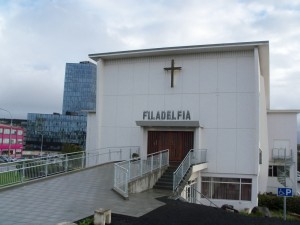 Before getting all the way downtown, I ended up by the harbor, where there are separate paths for bikes: 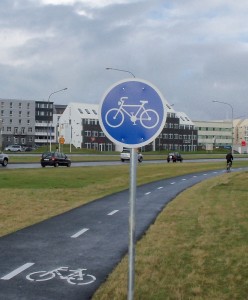 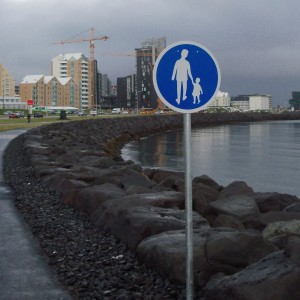 I walked west along the water, and saw this art, honoring the country’s viking ancestry: 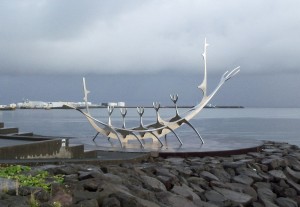 That was followed soon by this neat building, which is the city’s opera house: 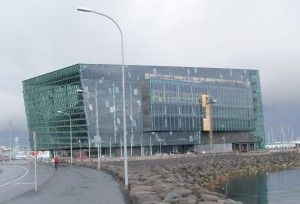 Here’s a billboard for an odd-looking show (a children’s TV program, I think): 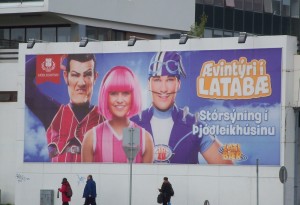 This is a preserved locomotive from an early railway that was used for construction projects in the harbor area: 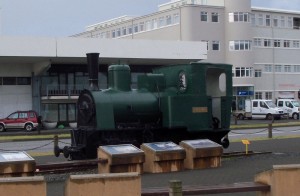 There have not been many trains in Iceland, and currently no railways operate in the country, though a proposal seems to be moving forward to run train tracks between the capital and the KEF airport.

Shortly after the train, I reached Reykjavik Bike Tours, from whom I was renting my transportation.  I met Stefan, one of the owners, who got the bike ready for me to ride (he put a new chain on it and made several adjustments).  All of their bikes have names, and mine was named Óli Stef, after Iceland’s most famous handball player (that would be this guy).

I mentioned to Stefan the issue with my bike baggage, and wondered if he could recommend a place to get a replacement bag, and he suggested that I might be fine if I covered the top bag with a garbage bag and then used a bungee cord to hold it together.  He even loaned me a cord for this purpose.  Armed with this idea (as well as helmet and lock that came with the bike), I rode back to the apartment to pick up my luggage and start my tour.