September 2 was my first full day in Iceland, and as detailed in my last post, it began with picking up a rented bicycle.  Once I rode back to the apartment I’d stayed overnight in, I packed up my things, including trying to compensate for the broken zippers on my luggage.  I loaded the panniers on the bike’s rack, and used a piece of stretchy netting with hooks (which I got years ago for holding things on a bike rack) to hold shut the side pocket.  I then covered the top bag with a plastic trash bag and wrapped the borrowed bungee cord around it.  This held it closed nice and tightly.  I made a few holes for the buckles that would clip it on top of the panniers, and attached it.  I then put over the whole array the rain fly that came with the bike luggage set.  That would keep things dry and have the added benefit of holding the bags together.

I got going on the bike around 11:00am.  I headed east, following a bike/walking path that paralleled the main road out of the city (Route 49).  On the way, I encountered a river with an island of ducks (click on any image to see the high-res version): 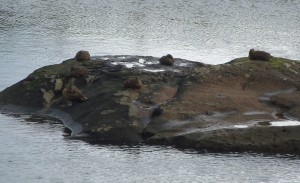 There had been a bit of drizzle off and on during the morning, but just after I took this picture, it began to rain in earnest.  The rain did not last very long, though, mostly letting up by the time I got near the outskirts of the city and Route 1, AKA the Ring Road.  Here I’m looking out at Route 1 from up a hill, the bike path having gotten away from 49: 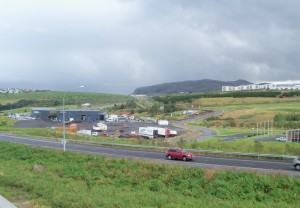 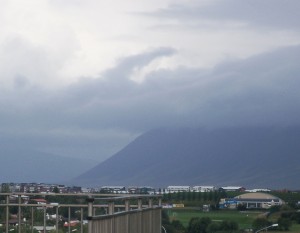 I managed to make my way downhill to a road whose sidewalk went under Route 1, and then bent north, which was the way I wanted to head on 1.  The sidewalk went away from any roads for a bit, and I followed it in what I thought was the correct direction, but I eventually noticed I could see the city ahead of me.  I had gotten partly turned around and was heading northwest, into a residential neighborhood, and sort of back toward downtown.  I made my way toward high ground to see if I could find my way back to 1, and it started raining some more as I did so.  I did eventually make my way out of the subdivision, and saw a way down to 1.  I headed there and got on the proper bike path, which went north right next to 1.

After a short while, I came to this sign at a cross road: 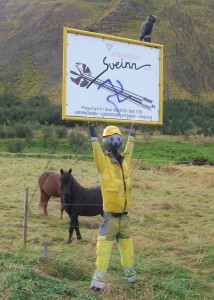 Not sure what to make of the graffito on it (it’s reversed from the usual swastika orientation).

In that field were a bunch of horses: 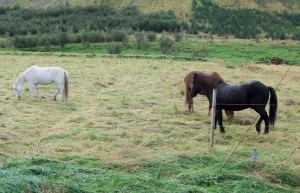 with an impressive ridge behind: 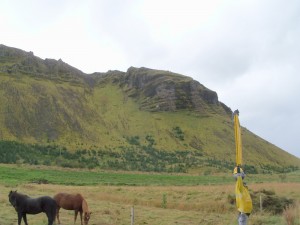 The rain had subsided for a little while, and then started anew.  I had to get off the bike path briefly and ride on 1, and just as I saw where I could get back on the path, I suddenly had trouble steering, and discovered that the rear tire had gone flat.  I got off the road, and looked around for a good place to change the tube.  Fortunately, I was next to a small park, and I spotted a gazebo.

I had planned for such an emergency, bringing a spare tube, tools, and pump.  With the gazebo, I was able to get out of the rain, which made the repair work much more pleasant.  It also stopped raining again while I was working.

This is the gazebo, and Óli Stef with a fresh new tube in place: 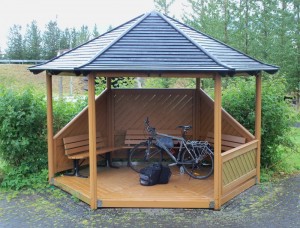 There was a little pond right near the gazebo: 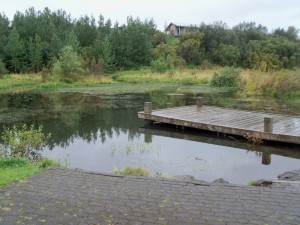 There were also some fairly hidden ducks there (at least, it took me a while to spot them): 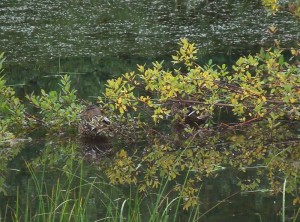 The park seemed to be in honor of someone or something, according to this sign: 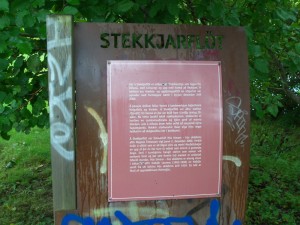 and it included this interesting sculpture that uses a big piece of lava rock: 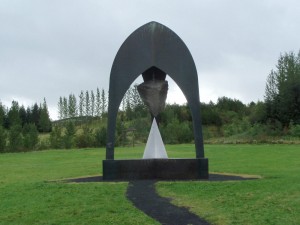 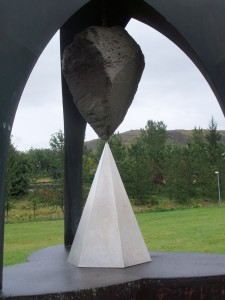 I got back on the path and rode on to the intersection of 1 with Route 36.  The bike path headed off to the east, running along 36, which happened to be the way I wanted to go which was good.  It was also raining heavily at that point, which was not so good.  I had a rain poncho, but it only does so much good – especially annoying is the rain pelting one’s face in such circumstances.  Soon after starting to follow 36, I passed a cyclist going the other direction – the first other bike I’d seen since leaving Reykjavik.

After another couple of miles, the path ended and I had to ride on the edge of the road.  36 isn’t a very wide road, but there also is not a ton of traffic, so it was generally not an issue for cars to go around me.  As had been the pattern so far, the rain let up after a while, but this time a bit of sun peeked through.  Here’s an example of what the view is like along much of 36: 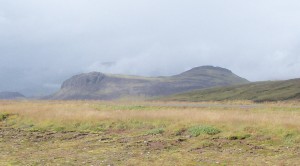 For a while after taking this picture, I had dry riding.  Before I knew it, I had reached the border of Thingvellir National Park.  There will be more on the park itself in a later post, as I was only riding through the park that day, and would be coming back to visit more thoroughly later in the week.

When I got to the park border, I found this field of rock cairns: 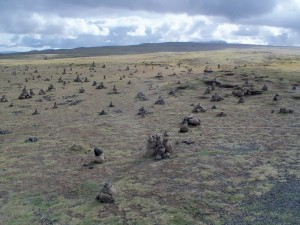 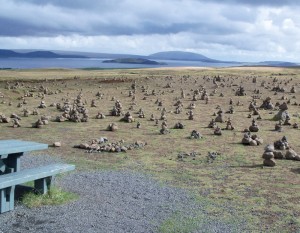 Beyond the field is the park’s lake, Thingfallavatn: 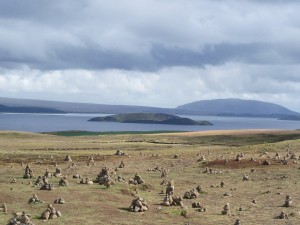 The road went a bit north at this point, then turned east again (so as to go around the lake).  In the middle of the park I stopped at the snack bar/gift shop and got something to eat.  It was a lamb and bean salad sandwich.  That is to say, the sandwich had a slice of lamb lunchmeat, and the bean salad was basically mashed white bean of some kind, with bits of green bean in it.  It wasn’t bad, and I was certainly hungry, even though I’d eaten some snack food that I brought along.

Some more rain started falling while I was at the snack bar, but the sun was out toward the west, so there was a rainbow in the eastern sky: 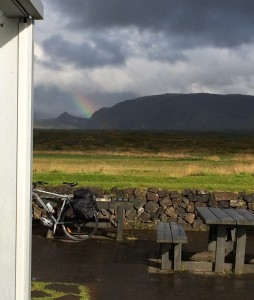 I headed on through new rain, as the road headed south a ways.  The rain stopped again shortly before the road exited the park, and I had dry riding the rest of the way to my destination.  Here are some more views from around the eastern park border, including looking back at the lake: 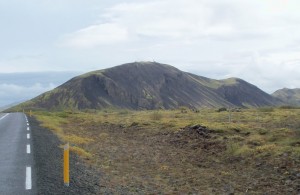 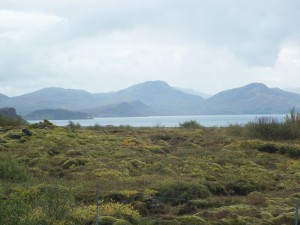 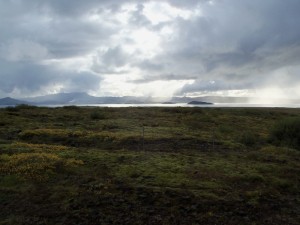 I soon turned east again, getting onto Route 365.  This took me another several miles to the town (and smaller lake) of Laugarvatn, where I would be staying the next few nights.