Blog : Day of Back and Forth

Day of Back and Forth

On Friday, 9/12, I headed for Picadilly in the morning, to go by a small art gallery.  The gallery had a showing of photographs of Kate Bush by 2 different photographers (showing that month because of the concerts).  Before stopping in to the gallery, I found a somewhat fancy restaurant in which to have breakfast, and ended up ordering kedgeree.  The version I was served is mostly as described in the wiki, except that it had a single poached egg on top instead of boiled eggs, and it contained salmon as well as haddock.  It was pretty good.

I looked over the gallery show pretty quickly, as there weren’t a huge number of photos.  Some of them were interesting, but not enough for me to want to buy the KB art books by either artist.

After that I headed to the Institute of Contemporary Arts.  I was interested in looking at exhibits they had, as well as seeing a movie in their theater in the afternoon.  I bought the film ticket, and proceeded to start going through exhibits – which there weren’t many of.  It did not take me long to go through the place, so I had a couple of hours free before the movie was to start.

I ended up walking over to Trafalgar Square.  Here is the famous column topped by Admiral Horatio Nelson: 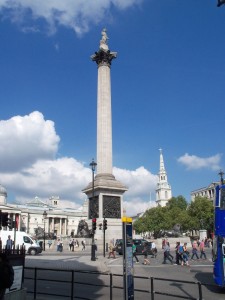 and one of the lions around the base of the column: 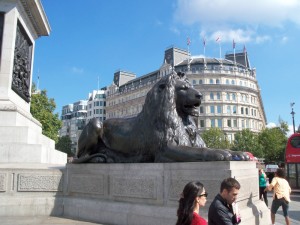 The National Gallery, on the far side of the square: 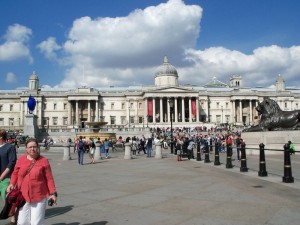 One of the fountains in the square had a worker wading through and cleaning it: 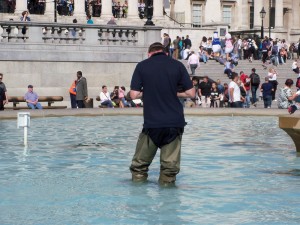 And here is the Fourth Plinth, which apparently has often-changing art installations: 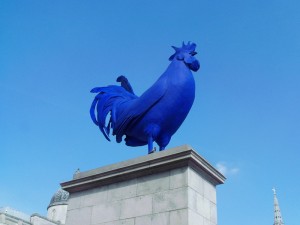 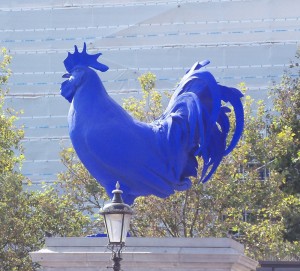 After taking these pics, I went into the National Gallery and looked at all sorts of paintings for an hour or so.  I then headed back to the ICA for the film.  I was seeing an Iranian film – Manuscripts Don’t Burn.  It was a well done movie, though quite bleak.

After the movie I went in search of dinner, and chose an Indian restaurant near the West End theater district.  I had vegetarian thali (always a good thing to order if you want to try a number of dishes).  Afterward, I walked around some of the West End, before heading to the National Gallery a second time and going through just about the rest of it before they closed at 9pm.

From there I walked to the Thames, crossed over the Jubilee Bridge, and headed along the south bank toward Westminster bridge.  I caught the bus near the bridge and headed back to sleep my final night in London.