Another post involving pictures from this past spring – this time from early May.  Around that time, a few bird nests got built on and around our front porch.

There were some finches who initially were determined to build a nest inside a light fixture on the porch, but every time they tried to bring twigs and stuff inside, the materials would just fall out the bottom.  We ended up hanging a small basket from the light, and eventually they successfully built a nest in the basket.

Here are the eggs that were laid, which were a pale green color: 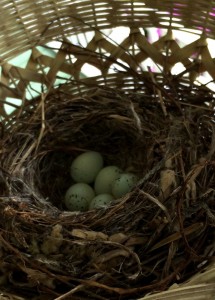 Eventually we saw 3 baby birds that had hatched and who eventually left the nest.

In a couple of bushes by the porch, robins nested and laid eggs.  Here is one of the robin nests: 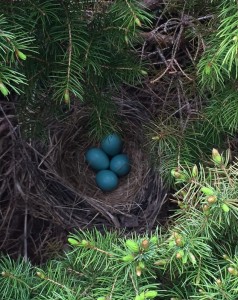 Some of the ones in this nest were successfully hatched and raised, though I don’t recall how many.  Unfortunately, the other nest, which was in the holly bush, ended up being abandoned with a few eggs in it.