So I posted a few weeks back about the 2 flowers that bloomed this year on our night-blooming sirius plant.  It seems that it had not finished at that time with producing flowers.  While I was vacationing abroad in September, 6 more flowers began to grow on the same plant!  Now, none of those got to be the usual size at which the flowers bloom, and in fact none of them opened.  They ended up withering and falling off.

However, that still was not all for this year.  At least a month ago we brought the plants inside as the weather was getting colder.  That plant started growing a couple more flowers.  We still did not end up with a full bloom, but they got pretty big this time, and one almost opened.

This is the most developed that one got: 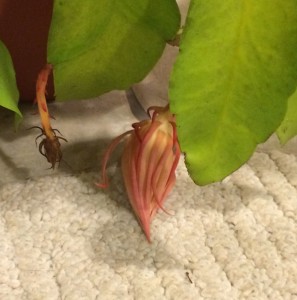 The other seemed to start blooming, but did not get past this stage: 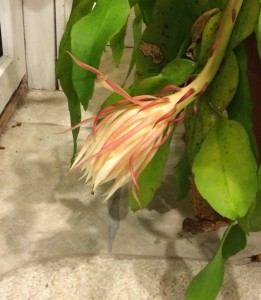 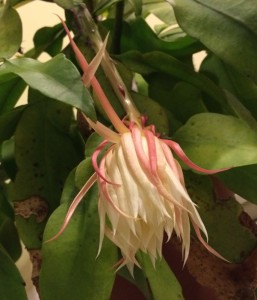 I don’t know if the fact that it was hanging in the air made a difference (all the blooms we’ve had were resting on the porch surface).

I expect that there really won’t be any more flowers this year, but who knows?