In mid-October, a new hiking trail on newly conserved land was opened here in Hadley.  The Trustees of Reservations, a private non-profit, purchased the property to protect it from development, and are now making it available for the public to enjoy.  Mount Warner (a reasonably-sized hill in the north part of Hadley) is the location of this new reservation.

I attended the formal opening ceremony that weekend to check out the new place.  I arrived a bit early, and there were already many people there (click pics for larger versions): 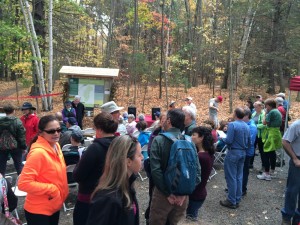 And there were tents set up with information displays on the history of that area of town, and on the Trustees and their other properties (a couple of which I’ve been to, such as the Chesterfield Gorge): 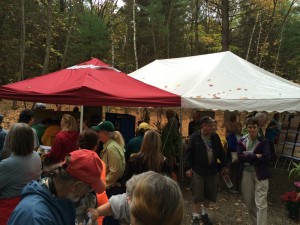 Some various remarks were made about the acquisition of the land and preparation of the trail: 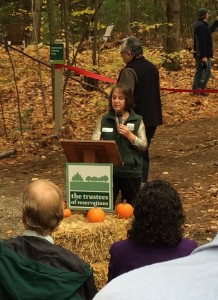 They fortunately had setup a PA system for this, as the crowd was easily up to 60 or 70 people by the time things got started.

They had a ribbon cutting with the obligatory giant pair of scissors, and all children in attendance were invited to take part (along with State Rep. John Scibek and State Senator Stan Rosenberg): 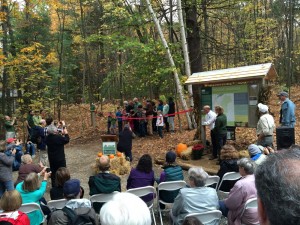 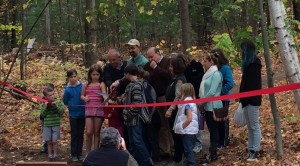 After the cutting, there were a couple of guided tours offered of the trail.  I started out following a tour group that included a Trustees naturalist talking about various flora along the way, but as I didn’t have a lot of time, I ended up moving ahead of the group to hike the entire trail on my own.  The trail is a loop that’s a bit over 2 miles long, so I had just enough time to cover the distance before I needed to get going on other errands.

At the apex of the loop, there was a side trail that led to a lookout point.  Mt. Warner is a very gradual hill, unlike many other large hills in the area, so one looks across a field to the view, but it’s still a pretty nice view: 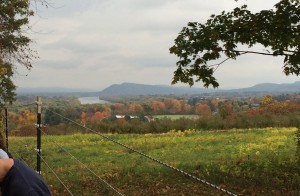 That view looks north, including some of the Connecticut River and, in the distance, Mt. Sugarloaf.

The trail did involve some climbing, and so was a good workout, but overall I did not find it as interesting as the trails on the Holyoke Range (around the border between Hadley and South Hadley).  It was nice to visit once, but I don’t know that I’ll head to Mt. Warner to hike again.