This past Sunday, the 18th, I rode in the Northampton Cycling Club’s BikeFest.  It’s an annual event I’ve done multiple times before, and serves as a good final preparatory ride before Will Bike 4 Food.  I rode the 75-mile route, which is listed in the main links on the page as a 72-mile route, for some reason (and they call it a “metric century”, which generally means riding 100 kilometers, or 63 miles).

In any case, the route’s length was just over 75 miles, and we started riding just before 9am.  The weather was very slightly rainy at the outset, but that cleared before too long, and I just had to deal with wet roads for much of the day.  There was a fair amount of hill climbing in this route (a little more than 4600 feet worth), mostly contained in the first half of the route.  Starting from Look Park in Northampton, we rode through the town of Williamsburg, then up into Ashfield, which involves a very long, gradual climb.  Fortunately, it’s a climb I’ve done more than once in the past, so I knew what to expect.  The long climbing was rewarded after Ashfield center with a whole bunch of downhill riding into Conway, then down into Buckland to Shelburne Falls.

In Shelburne Falls, the ride had its first rest stop, at the 25-mile point.  The stop was set up by the Deerfield River, and the geologic feature known as the Glacial Potholes. 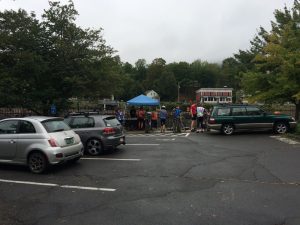 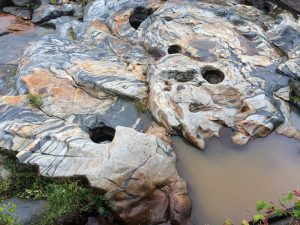 From there, the route actually doubled back for a few miles, heading south into Conway the way we’d come.  It then veered off east into territory I’d never been in – an area known as Bardwell’s Ferry.  It’s a pretty area and I had to do some more hill climbing, then descended to a steel bridge that crossed the Deerfield.  Here’s the view from the bridge, looking both up and downriver, followed by the bridge itself. 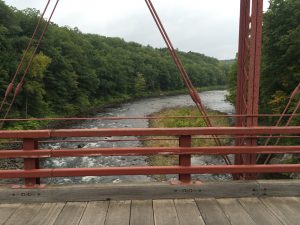 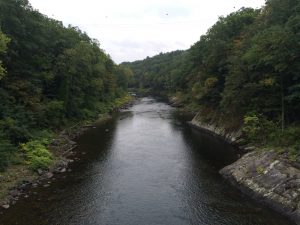 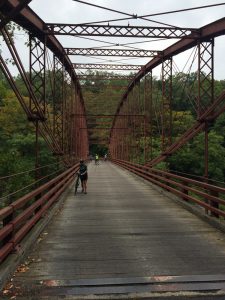 The unfortunate part was that a steep, and somewhat long, climb happened immediately on the other side of the bridge.  That climb happened to have a dirt and gravel section of road near the top, apparently because of construction (I don’t think it’s always a dirt road there).  Through the Bardwell section, I passed, and was passed by, a number of riders doing the 50-mile route.  We all had to rest at points going up this hill.

There was some nice flat riding, and a little bit of downhill riding after the dirt bit, but soon another hill arrived, which I had climbed before.  This was in the town of Shelburne, still headed east toward Greenfield.  As I started up this next hill, I suddenly heard the sound of bagpipes.  There was a large field of grass by the road, and up in the middle of the field was a piper, playing for the riders (I’d experienced the piping in a previous iteration of the ride, but only at a rest area, not in the middle of the countryside like this).  I had to stop and rest before getting out of sight of the piper, so listened to the rest of the piece before continuing up the hill.  Near the top there was another piper just on the edge of the road.

Once that hill was crested, it was all downhill into Greenfield, so I got there pretty quickly, and arrived at the second rest stop.  This one was at the Franklin County Fairgrounds, and at this point I was about 43 miles into the route. 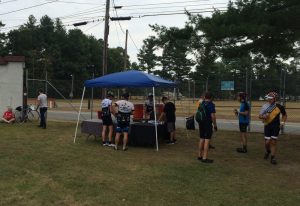 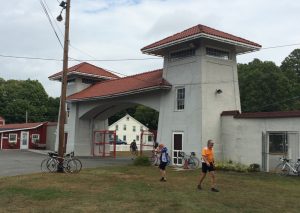 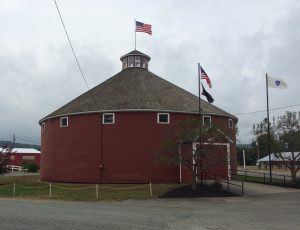 At this stop, we 75-milers mixed with people going 50 miles and some of those on the 100-mile trip.  From this point on, I believe the 100-mile route lined up with the 75-mile (so the century riders were further along in their ride).

From here the ride was less hilly.  There was a bit of a hill climb in Greenfield before descending and crossing the Connecticut River into Montague, and then we rode the bike trail into Turner’s Falls, and had a moderate climb out of there to head south.

I was beginning to get sore and tired by this time, so even though the terrain in Montague Center, and then Sunderland, was relatively level, I had to stop and rest a few times.  The third rest area was in the center of Sunderland, at mile 60, and I believe I spent longer there than at either of the previous 2 stops (though still only about 15 minutes or so).

The last 15 miles were almost completely flat, as I passed through Whately and Hatfield, then back into Northampton.  I still had to stop a number of times, mostly to give my legs a rest for a few minutes each time.  I still made good time, arriving back at the start 7 hours and 15 minutes after leaving.  That timing certainly puts me on track for doing the upcoming 100-miles within my time goal.

That century ride for Will Bike 4 Food is coming up in just a few days, and as I’ve done in the past, I plan to try and live blog the ride.  Look for updates in this space throughout the day Sunday.