The post title does not refer to cracked or skipping vinyl discs, but to my fundraising ride this past weekend doing better than previous rides in 2 respects.

First off, the fundraising: people donated more to this ride than in any of the other five times I’ve asked for such donations (2007 and 2009 for the National MS Society, and 2011-2013 for the Food Bank). All the donations from others came to $1450.  With the $1000 I contributed myself, that’s $2450 in total.  An e-mail that was sent out today says the whole event brought in over $114,000 in contributions.  It feels great that the organization is getting so much!  Thank you again to everyone who donated.

The other record, as referenced in my live posts from Sunday, is that I rode 100 miles in less time than ever before.  My previous best time for this distance was 10 hours and 30 minutes (which was, interestingly, how long it took me the first time I ever did a century ride, in 2011).

This ride started out chilly, as the temperature was in the 40s when I showed up at the start.  It started and ended at the Lions’ Club Pavilion in Hatfield, which is in the town center.  I had driven there with the bike, arriving about 6:30am, and then got checked in and had some of the provided breakfast (a bagel with cream cheese and a sweet roll).  Some signage, etc. was still being set up as I prepared to get going. 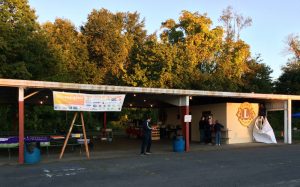 The official start time for the 100-mile route was 7:00, and while riders on that route could start whenever they were ready, I ended up getting going right at 7.  The sun had just come up, but there was fog to be seen in some places.  The route went north through Whately, where I saw a rabbit and some chipmunks on the side of the road who seemed surprised that humans were passing by so early.  I then passed into Deerfield, continuing north along the Connecticut River.  Just after entering that town I passed into pretty heavy fog.  Fortunately traffic was very light.

In the north part of Deerfield, the route went onto a bike trail, crossing the river into Montague.  We followed the trail all the way into the Turner’s Falls section of town, and then exited up onto the road just in time to cross the CT River again into the town of Gill.  I stopped to use a bathroom just before crossing the river here.  Once in Gill, the route climbed a sizeable hill, at the same time that it went onto a road I’d never been on (called, appropriately, Mountain Road).  This climb was not too bad – I was able to make it to the top without stopping, and then the downhill portion was mostly nice, except that it had a really tight S-curve on the steepest part.  I had to really lay on the brakes and creep around the curves, for fear of losing control otherwise.  I did stop briefly before reaching the bottom, just to get rid of my momentum and proceed slowly until the road became fairly straight.

Once that hill came to an end, I turned back onto the main road in Gill (named Main Road, in fact) and passed through the center of town, then north past the Northfield-Mt. Hermon School, an old private boarding school up there in the countryside.  The route took a couple of turns before continuing north, and seemed to go through small pieces of various towns.  In order, I traveled in Gill, Northfield, Gill, Bernardston, Gill, and Northfield.  I was then heading north in Northfield (on route 142) for a little while, until I reached the Vermont state line.

The route went through the whole south-north length of the town of Vernon, VT – about 6 miles’ up from Massachusetts.  I stopped for a rest some of the way through, and took these pictures of the distant hills (click on pictures to view full size): 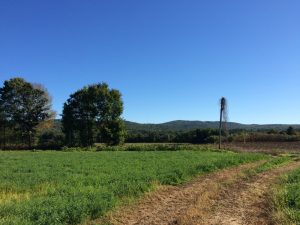 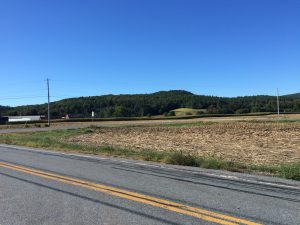 Eventually, just before the route turned west, I came upon the first water stop of the ride.  It was operated by volunteers from a local grocery store, and they had bottles of water and granola bars on offer. 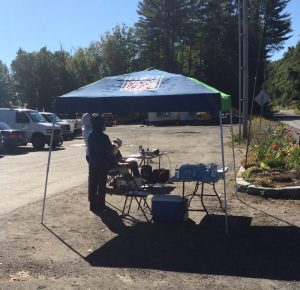 On reaching this stop, I’d gone 39 miles, and it was just about 10:30am.  At a few points during the morning, I’d been passed by other cyclists.  A group of 3 of them went by me just before this stop, and they left the stop pretty quickly.  At that point, I think I was probably the furthest behind of the century riders (fortunately it was not a race).

After leaving that stop, the route turned west onto a dirt road that went uphill.  I’m not fond of riding on dirt or gravel, but this was a very pretty section.  At one point there was a little bridge over a creek.  Here are views over each side of the bridge: 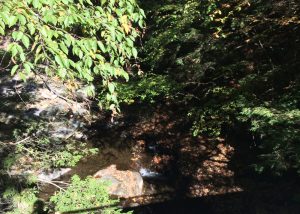 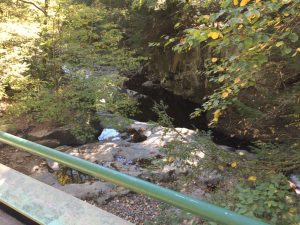 Once I got to the top of the hill, the road became paved, and then headed under I-91 into the town of Guilford.  The ride started to head southwest at this point, then went south.  This is where various hill climbing began to happen.  A lot of it was gradual, but I was climbing much of the time.  The route passed back into Massachusetts at mile 48, and then soon turned onto another dirt road.  This one climbed a hill like the previous one, and on this hill I passed the halfway point of the ride.  The dirt ended as I got into the Leyden town center.  There was a cyclist at the Leyden town hall working on his bike, and a little while later, he caught up to me, and we rode together for a while.  The route had a bit of downhill, but mostly more climbing as we went west into the town of Colrain, then headed south some more.

This fellow cyclist was also on the 100-mile ride, and had gotten a flat on the second dirt road.  He also said his wheel rim had gotten slightly bent.  As we conversed, it turned out that we both work in different health care facilities in Holyoke, which use the same medical record software, so a bunch of discussion centered on that.  He got a bit ahead of me as we went (most long-distance riders seem to be better hill climbers than me), but on a flat road I heard a loud “pop” from his bike, and we stopped.  It turned out his tube had blown out.  He didn’t have another spare tube, and I offered that he could try the one I had, but my tires were wider than his, so it wasn’t clear it would work.  Before he made an attempt to use the tube, though, a support vehicle drove up, and the volunteers in it offered a couple of tubes, one of which seemed to be the correct size.  Since he had other people looking out for him at that point, I continued on.

Soon the last of the climbing was over, and I started heading downhill, out of Colrain into the town of Shelburne.  This was a long downhill section, covering 4 or 5 miles (and it allowed me to make up time after the slow climbing).  Before 1:00 I was in Greenfield, riding on a short bike path.  The riding was fairly flat there, and I ended up on routes 5 and 10 heading south into Deerfield.  At this point I started to pass, and be passed by, riders on the 50-mile route.  Their route coincided with the rest of the 100 from that point.  We passed through Historic Deerfield, followed the Deerfield river a bit, then went through Deerfield Center, before heading south into Whately.

By the Whately town offices, I finally came upon a second water stop.  This one seemed to be staffed by a group of high school students, and they were offering chips and peanut butter sandwiches in addition to bars, water, and energy drinks.  I took a sizable break here, which was at about the 74 mile mark.  One thing that was odd at this stop was the lack of any Will Bike 4 Food signage, and in fact, once I got going again, I came upon another stop 2 miles later that did have such signage.  I didn’t stop there since I just had done so.

The ride entered Hatfield again, and then veered off west into Williamsburg.  This involved some more climbing, and I could feel myself having a harder time of it.  I did make it up the first hill, then had a gentle downhill ride past a reservoir, and then another bunch of climbing to a final water stop.  I was just there briefly, then went downhill into Williamsburg Center.  From there, the route turned back east, traveling into the Leeds section of Northampton, and then the Florence section of Noho.  Shortly after entering Florence, I came upon a pair of cyclists (not affiliated with the Food Bank ride) stopped on the side of the road, and they were pointing back the way I had come.  I stopped by them, and asked what they were pointing at.  They said I should turn around and look.  I did, and saw that I had just passed by a bear on someone’s lawn!  It was a smallish black bear, and it was foraging around the base of a tree and ignoring us.  I took some pictures, in which you can mostly just see a dark shape in the center: 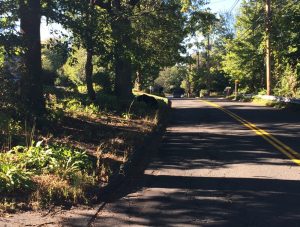 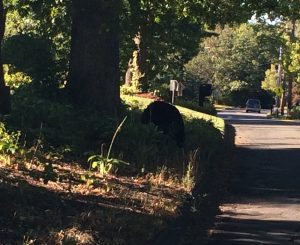 I really did not want to get closer to try and get better pictures, so you’ll have to trust me – that’s a bear.

This was at mile 94, so I was in the home stretch.  I rode northeast from there, back up into Hatfield, and eventually made my way back to the Lions’ pavilion.  I got there and finished the ride at 4:45pm.  I checked back in and had some dinner before they started to put away the food (the after-party ended at 5pm).

The booths and decorations were mostly taken down by 5:00: 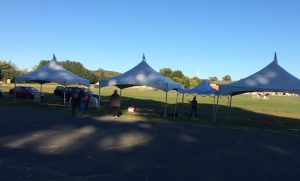 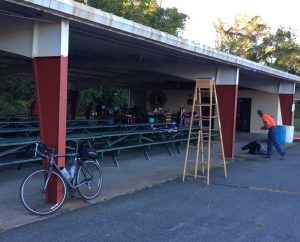 (that’s my bike leaning against the column)

Having eaten, I packed my bike and stuff back into the car to head home.  The final tally of miles for the day: 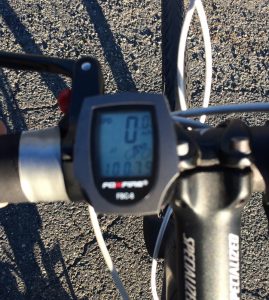 Thanks again for those who donated – your support gave me some of the inspiration I needed to finish in record time.