Blog : On Top of Monadnock

On Top of Monadnock

I turned 45 in June, and, as I had done when I turned 40, I celebrated with a long weekend bike trip.  In this case, I headed north (and a bit east) into New Hampshire, where I intended to hike Mt. Monadnock, which I’d been meaning to do for several years.

I started the trip on Friday, biking through South Hadley, Hadley, Amherst, and Leverett, and then stopped for lunch in Montague (at the cafe at the Book Mill).  From Montague Center I rode up to Turner’s Falls and then into the town of Gill, and just as I passed into Northfield, Mass, it began to rain lightly.  Fortunately, I’d brought a rain cover for my bike luggage, so I was able to keep the stuff dry while I rode through Northfield.  When it started to rain a little harder, I took shelter briefly at a bank drive-through lane.  I only had to wait 10 minutes, and then it lightened up.  Soon, as I was about to cross the state line into NH, the rain stopped completely.

What was interesting was that, in NH, the ground was much wetter than in MA.  It had clearly rained more there, but by the time I got up there the sun was out and the moisture had started steaming off of the road surface.  I rode on (along route 10) through the town of Winchester, and eventually the ground dried up.

At one point I stopped to rest by this pond/wide piece of river (click on pictures to enlarge): 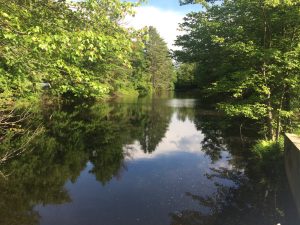 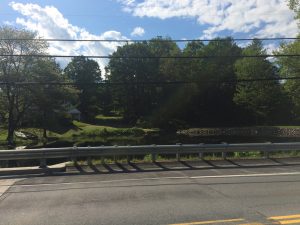 I continued north through West Swanzey, and on into Keene.  I had intended to pick up a bike trail in W. Swanzey, but did not find it (turned out later that I had incorrectly remembered which direction it lay from the main road).  I eventually found the trail just after getting in to Keene, and followed it to downtown, where I had dinner.

After dinner, I headed southeast, toward the town of Rindge, where I would be staying the night.  It took a bit longer than I’d expected, and I was feeling fairly tired.  I did cross a few nice looking streams/rivers, or perhaps the same one multiple times, as I rode down route 12.  They all looked similar to this: 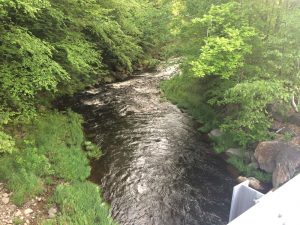 It was after dark by the time I reached Rindge, but I’d brought lights, and so was prepared.  I had booked to stay 2 nights at an AirBnB place, which had the advantage of having a couple of cats.  The long-haired one was more friendly and approachable, while the other one only showed up after I’d been there a while, and he crept very cautiously into my room: 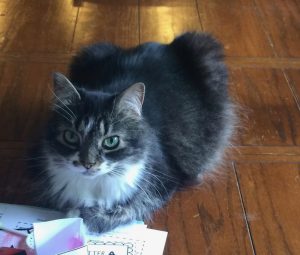 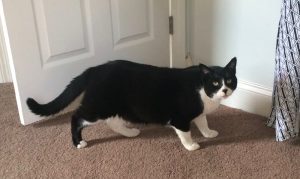 When I went to bed, I left the door cracked open in case a cat would want to visit during the night.  As far as I’m aware, that did not happen.

The next day, I biked down to a nearby diner for breakfast.  The house where I was staying was right on a trail through the woods, so I did not have to ride on the road. 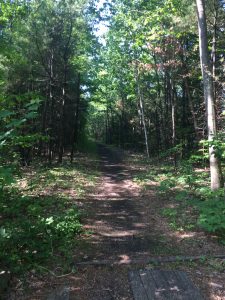 The trail was a bit rough in spots – it’s an old railroad line, and there as a section that still had ties in place (I walked the bike over those).

After breakfast, I biked up to Monadnock State Park and met up with my friend David.  We started up the mountain, as he told me that it’s a very popular hike, despite being pretty strenuous.  I had not realized how strenuous, but it does go upward more than it goes laterally (i.e. the slope is greater than 1).

The mountain is very forested, so it was quite a while before we had any kind of view.  Once we did, it was pretty cool. 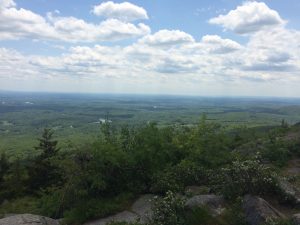 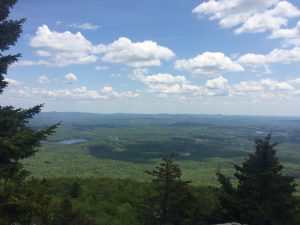 We were about 2/3 of the way to the summit at that point, I believe.  The summit itself is mostly devoid of vegetation.  Here’s a view from the top: 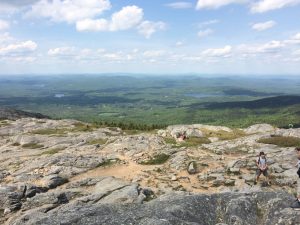 And then standing a little lower, looking up at the summit: 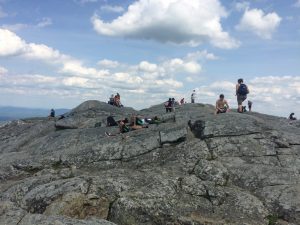 As mentioned, it’s a popular spot.  We hung out up there for about half an hour, then went down by a slightly different trail.  I had not brought quite enough water for the hike, as it turned out, so I was rationing myself as we went back down.  Once we got back to the bottom I drank a whole bunch from a faucet by the bathrooms.

After recovering a bit, we parted ways, and I biked back into Rindge.  I took a shower and then got some dinner, and ended up going to sleep somewhat early (funny how doing a 5+ hour mountain hike the day after 85 miles of cycling will wear you out).

The next day I had breakfast at the same diner, then packed up and started heading for home.  I went by a different route, traveling west from Rindge into Fitzwilliam, then south into Royalston, MA.  Unfortunately, what was not included in the route I’d mapped was a bridge under construction soon after getting into MA, which necessitated taking a 4 or 5 mile detour which had a bunch of up and down riding.  At least it was still morning, and so not too hot yet (though that day ended up getting into the mid-nineties).

From Royalston I kept going south until I reached Athol, then I rode on Mass Routes 2A and 2 west through several towns (Orange, Erving, Northfield, Gill), until I got to Turner’s Falls, and I then mostly retraced my path from Friday (though passing through Sunderland instead of Leverett).

On the way through Montague Center, I stopped to check e-mail, and while stopped, I noticed something familiar looking at the front of a residential property: 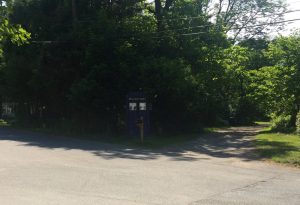 I went closer to see if this was actually what I thought it was.  It was, indeed, a facsimile of a certain British Police Call box. 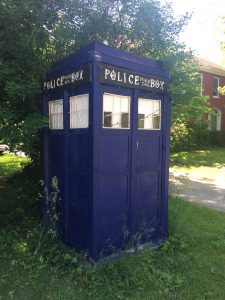 It lacks a bunch of details, but maybe it’s trying to look unassuming…

The rest of the ride was fairly uneventful, but much of the day I’d had to stop for shade breaks because it was so hot.  So the riding took longer than I’d expected, even though I was only traveling about 65 miles.  I met up with others in Hadley for ice cream (at Flayvors of Cook Farm), as part of a joint birthday celebration for 2 of us, and because of the late hour and the heat, my bike and I got a car ride home.