Blog : A Bear in Connecticut

A Bear in Connecticut

In mid-July I went for a ride down to Connecticut, riding on the Farmington Canal Heritage trail.  I’d done the ride twice before, and mostly saw the same sights I photographed the first time.  Hence, I didn’t take many pictures this time.  Like the last time I did it, I rode all the way from our house in Holyoke to Westfield, where the trail begins, and then followed it all the way to Farmington.

I ate lunch there (at this place again), and then headed back.  Overall the ride had been pretty uneventful, but when I was passing back north through the town of Simsbury, a cyclist ahead of me came to a stop, and then I noticed something on the trail quite a ways ahead.  At first I thought it was a large dog, but then realized it was something else: 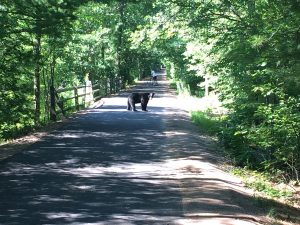 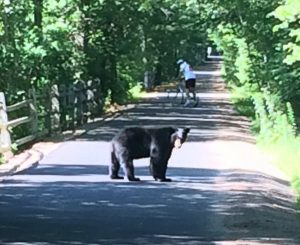 It was a black bear.  As you can see, it was holding up bike traffic in both directions.  I moved forward slowly, and the bear started to move away (that far cyclist backed off to give it room).  After a bit of this, the bear turned off and headed into the woods, and I was able to continue toward home.

When I had just gotten back into the Holyoke city limit, I was climbing a hill, and found a snake lying on the side of the road.  It did not move at all as I took pictures of it, so I suspect it was dead, though there was no obvious trauma to it (and it was far enough to the side of the road that I’m not sure a car would have run over it). 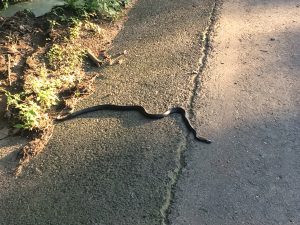 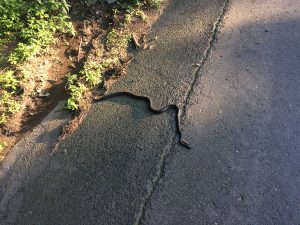 I got home without incident, completing what was then my longest riding day of the year (88 miles, just a bit longer than the day I rode up to NH).