A couple of weeks ago I went for a ride on a Saturday afternoon, looking once again to explore some places I had not gone, even though they are relatively close to home.

I first rode up to Northampton to run an errand.  Then I headed back south as far as the Connecticut River oxbow, and went southwest on the Manhan trail in Easthampton.

My intention was to head up into the Mt. Tom Reservation, but not via the ways one can drive in.  I’d noticed quite a while back that maps show a road going in to the place from East St. in Easthampton, but I’d seen from inside the park that that route is gated off.  I wanted to see if it was a road one could take a bike up.  The road begins as an actual residential street, as it turns out – it’s called Reservation Road.  It goes uphill somewhat, and then the houses end and there’s a gate across the pavement.  Once one passes the gate, there is not a whole lot of pavement, and at some points there is only dirt and gravel.  Overall, it is more of a hiking path than a road these days.  It’s wide enough for a motor vehicle, but you’d need serious tires and 4-wheel drive to get through.  Meanwhile, on a bicycle, I was able to ride up most of it, but toward the top it got too steep, so I ended up walking my bike the last eighth of a mile or so to the top gate.

At that point, I was able to ride out the east side of the reservation, which is a nice route – all downhill and smooth pavement.  That took me out to Route 5, where I headed south.  As I headed uphill into the Holyoke Highlands, I turned off again, on the Mountain Park Access Road.  This road crosses over I-91, then stops outside the gates of Mountain Park, which was once an amusement park but is now an outdoor concert space.

There are a couple of side roads there that skirt Mountain Park, and which are blocked to car traffic.  One of them goes north, and heads partway up the side of Mount Tom.  I had been that way once in the past, but had not taken the other road to the south, which is what I did this time.  I rode downhill, then around a curve to the west and through a bit of woods to the Whiting Street Reservoir.  There is a gravel road that runs around the reservoir, which apparently is officially a cross-country track, used by local school teams.

On the east side of the reservoir, one has to climb up an embankment to see the water.  Here are some views of that (click on photos to see larger versions): 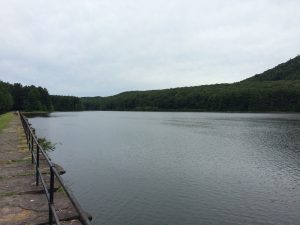 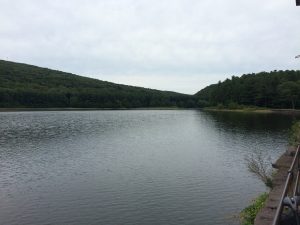 And here is a pumping station or something (a water works structure of some kind, anyway): 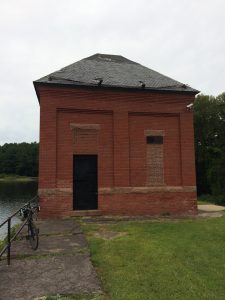 I rode counter-clockwise around the reservoir, but did not complete a full circuit.  When I got down to the south end of the water, I rode out of the area to exit onto Route 141, which I then followed east back to Route 5 and then home.

Total distance for this ride was 25 miles, but the next couple were longer ones.  Stay tuned.