Blog : Snaking out and Back

Snaking out and Back

On Sept. 15, I had time to go for a longer training ride, and I chose to head out east to Gilbertville (part of the town of Hardwick).  Instead of riding on route 202, which is the way I went in the past, I took various side roads that roughly parallel that highway.  Some of them were roads that I had not been on before, and one thing I discovered is that the route I took involved more hill climbing to get to Belchertown center, compared with 202 (followed by some downhill, of course).

Sometime soon after I crossed the Belchertown line, I came upon a snake enjoying what warmth the pavement had. 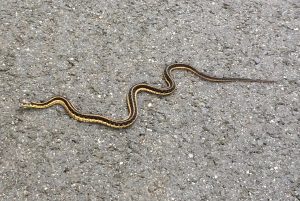 I was worried that it was far enough into the road that it might get run over by a car, so I moved close enough to it that it slithered off into the grass.  Satisfied that it was safer, I continued.

From the center of Belchertown, I went east on Route 9, but soon diverted off into the Quabbin Reservoir reservation.  It was a beautiful day at that point, and so I could not resist taking some pictures of the water from Winsor Dam: 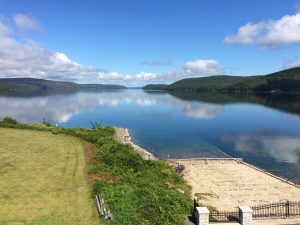 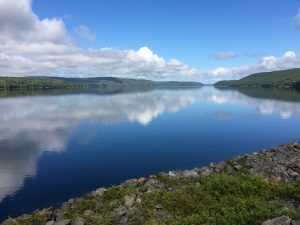 Here I’m looking along the dam: 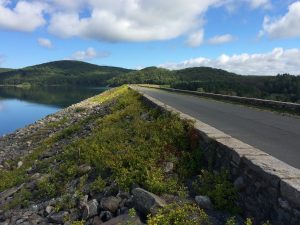 I rode across there and then up the hill that goes to an observation tower.  I didn’t go all the way to the tower this time, as I’ve been in it many times before, and wanted to make time.  It’s a long uphill anyway, but then one is rewarded with a lot of down hill before exiting to 9 again.

There are a couple more hills that I climbed in the town of Ware, before I came out on Route 32 and headed north into Gilbertville.  I stopped off for lunch at a bakery/cafe that had been recommended to us – Rose32.  Had a very nice sandwich and a strawberry ginger ale to drink, and then got a box of various pastries to take home.

I retraced my route back to Belchertown, but then headed west on Bay Road, followed by going north on Warren Wright Rd. to pick up the Mass Central Rail Trail (Norwottuck section).  I wanted to make sure to get a significant enough number of miles in, so didn’t want to head home the way I came (taking the trail was less direct).  I rode the trail all the way to Northampton, and then turned south and followed Route 5 back to Holyoke.

My total distance was 70 miles, and despite some of it being bumpy, the pastries survived the trip.