Last Saturday, I rode in Bikefest, which is put on by the Northampton Cycling Club.  As it happens the weekend before Will Bike 4 Food, it’s the perfect final training ride.  I did the metric century ride, and as in previous years, it was somewhat longer than 100 km (this year it was 69.2 miles, or about 111 km).

I did a little extra riding, as I parked a mile or so from the park where the event took place, and biked in to the check in area.  Here’s the picnic pavilion for check in and such, seen as I and other cyclists were lining up for the ride to begin. (click pictures to see larger versions) 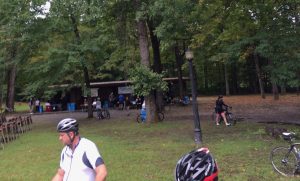 There were a bunch of riders around, but most of them were outside the frame at that moment.

The route was almost identical to last year’s Bikefest.  From Look Park, we rode into Leeds on the bike trail, then headed west and north to Williamsburg center.  From there we continued north, including a long, slow climb up through a bit of the town of Conway, and into Ashfield.

The ride turned off to the west shortly after reaching Ashfield, and climbed a bit more, and then we got a nice long downhill section, which was followed by some more climbing to the town center.  Just before reaching Ashfield center, I saw these horses grazing by the side of the road, and so stopped for a picture: 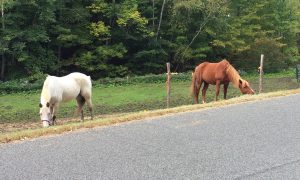 Continuing on, the ride got quicker, as it’s mostly downhill heading northeast from Ashfield center to Shelburne Falls, where the first rest stop was.

Here’s the rest stop, which was located at the famous glacial potholes: 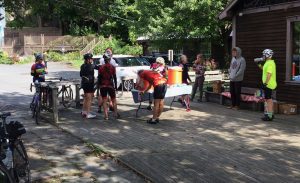 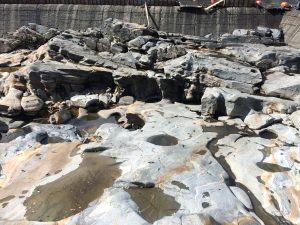 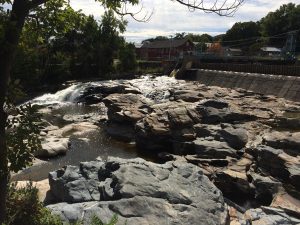 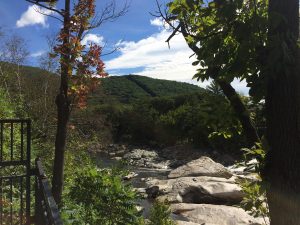 That stop was located about 26 miles into the route, so more than a third of the way through.

The next section of the ride was reasonably short, as we headed east through the town of Shelburne and into Greenfield.  The route had been shortened a bit here, as there was a point where, in past years, we’d gone south for a mile or so, then doubled back on a different road.  This time, we went more directly, but had to ride for a ways on a dirt road to do so.  Fortunately, it was a well-packed surface, with almost no loose gravel, so it was easy to ride on.  That portion was followed by one of the tougher climbs of the day – not as long as the earlier one, but steeper.  The reward for that climbing was a long downhill into Greenfield.  Even with my being slow in climbing, it only took me 45 minutes or so to get to the second rest area from the first, an 11 mile stretch.

That second stop was in Greenfield, at the entrance to the Franklin County fairgrounds: 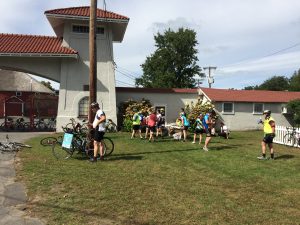 I began to notice something odd – while there were plenty of different kinds of snacks, energy bars, and the like, neither of the first 2 stops had any fresh fruit, which I remembered them having in the past.  The closest thing was fig bars, which I did have.

Soon after leaving that stop, there was a point where the ride crosses the Green River on a pedestrian/bike bridge.  That bridge was mostly blocked by a whole bunch of tree branches and leaves lying on it, and there was a municipal worker nearby with a chainsaw who had apparently been trimming trees there.  I asked if the bridge was okay to cross, and the reply was that “other people have been carrying their bikes across”.  So, I walked past the branches while holding the bike, then resumed riding at the other end of the bridge.

We went up over a hill, then down, and crossed the Connecticut River into Montague.  The route went onto the river/canalside trail there, into Turners Falls.  Once the trail ended, the last real climb of the day occurred, with an initial short and steep bit, and then a more gradual part as we headed southward.

The ride went through Montague center (past the Bookmill), and then followed a route near the CT river to head down into Sunderland.  Shortly after entering Sunderland, there was a nice river view from the road: 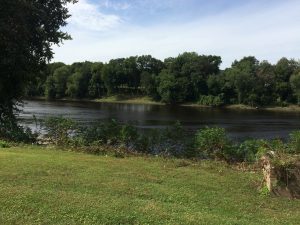 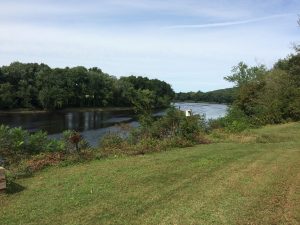 Soon after that, the route got to Sunderland center, and the final rest stop.  This stop did not have any fruit, either, and in the past it had the most (last year or the year before they had lots of apples and peaches there).

From there the ride had 16 or 17 miles to go, almost completely flat, as we passed through Whately and Hatfield, then back into Northampton.  The last bit of the route went back to Look Park on the bike trail, and I ended up finishing in a little over 6 hours (we’d begun around 8:50am and I hit the end a few minutes before 3:00pm).  It was a bit of an improvement on my time over the last couple of times I did this ride, with one particular difference being that I did the entire long Williamsburg to Ashfield climb without stopping to rest.  I seem to have some good strength and endurance going, which will be needed for Will Bike 4 Food.

After I ate at the post-ride meal, I biked back to where the car was parked, for a total of about 72 miles for the day.