As I live blogged, the Food Bank ride on September 30 began with thick fog.  As I drove to the starting point, I couldn’t see all that far in front of the car.

Here’s another shot of how things looked at the event (click on pictures to enlarge): 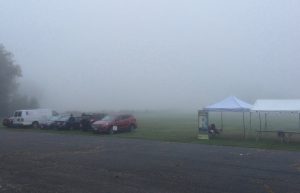 After getting checked in, I got some breakfast (lots of carbs), and I got going a few minutes before 7:00am.

Visibility was not too big a problem on the bike at first.  However, the fog did start to condense on my glasses, so that posed a bit of a challenge for a while.

The route was the same as the previous 2 years – starting from Hatfield center, I headed north through Whately and Deerfield, following the Connecticut River.  At the north end of Deerfield, the ride turned onto a bike path and crossed the river into Montague.  By this time another rider was traveling alongside me, and we chatted about the route and other cycling events.  As we crossed the river, we had our first glimpse of sun, and the fog mostly lifted after that.

We followed the trail to Turners Falls, and then got on the road and crossed the river again into the town of Gill, to begin the climb up Mountain Road.  It’s a somewhat long climb, with a few steep parts, which is followed by a steep descent that features sharp curves.  As I did the past 2 times, I laid on the brakes a lot for the curves.

Back on the main road (named Main Road), we went through Gill center, and a couple miles later came to the first rest stop at the Northfield Mount Hermon School.  Students from the school were staffing the tables of food and water. 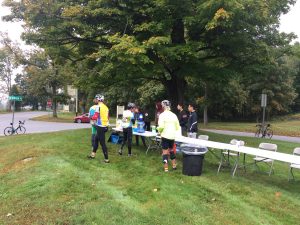 I had some food and refilled my water bottles, and rested a few minutes before continuing.  The route went north a few more miles through Northfield, MA, and then just after mile 31 I crossed into Vernon, VT.  The ride went straight north for another 8 miles along route 142, and the scenery was quite nice at points, but I didn’t want to stop for pictures much, as I was trying to make good time.  I did take one picture before heading away from the CT River – this is technically a little inlet from the river, I believe, and is in the north part of Vernon, near Brattleboro: 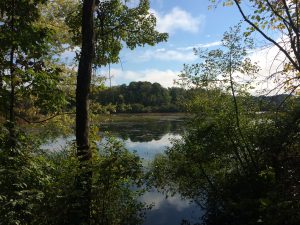 I rode west (and uphill) from there on the pretty Broad Brook Road (of which I took pictures the last 2 years), and into the town of Guilford.  In Guilford center was the second rest stop of the day – a new one for this year – at the town’s volunteer fire station: 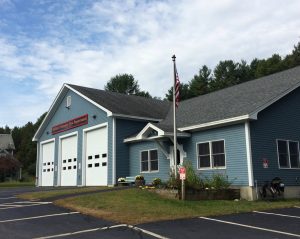 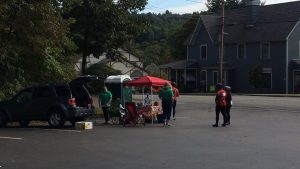 Here I grabbed a peanut butter sandwich, and only upon biting into it did I realize it was a fluffernutter (the bag was labeled “PB & F”).  I remarked on this, and one of the people staffing the stop said “Yeah, how long has it been since you had one of those?”  I answered that, actually, it had only been a week or so, as we eat them somewhat regularly at home.

The morning had been chilly, and so I’d been wearing a hoodie with the hood up.  Only at this stop, around 10:30am, did I take the hoodie off.  I still remained in a long sleeve top and long leggings the rest of the day, as the high only got into the mid-sixties.

From there, the ride went a bit west and mostly south through Guilford, and back into Massachusetts around mile 48.  In the town of Leyden, MA, I deviated a bit from the prescribed route, and took a dirt road that involves a climb, but it’s a more gradual climb that the paved route into the town center that was the official way to go.  I think this allowed me to get to Leyden Center (at 50.5 miles) a little fresher.

The town hall there: 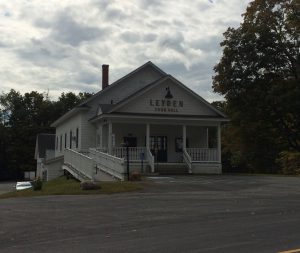 The next several miles involved some nice downhill segments with more climbing, which started to wear me out a bit.  The long downhill heading toward Greenfield was slowed a bit by the fact that the road was closed, so cyclists had to go around, and in some cases over, construction barriers.  The road itself was not torn up (I’m not sure why it’s closed to cars), but there were a lot of leaves and some sticks on the road, so I couldn’t charge downhill at too fast a speed.

Eventually I entered Greenfield at mile 62 and got onto another bike path, following the Green River south.  This is a fairly short path, so soon I was back on roads and skirting the city’s downtown.  I picked up routes 5/10 and headed back into Deerfield, then off onto a side road through the town’s historic district.  The third rest stop was located here, by Deerfield Academy, and was run by a large group of boisterous students, who applauded and cheered each rider who arrived. 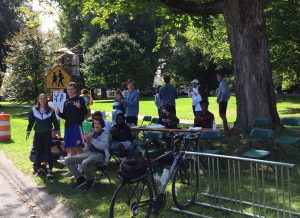 At this point I was about 2/3 of the way done.  After just a few more miles, I headed into Whately, and there came more concentrated rest stops.  There were 3 total in Whately and north Hatfield, largely because this section of road contained the intersections of different routes (the 50, 25, and 10-mile routes all passed along parts of that road).  I stopped at the middle one of the 3 to get a little more water and get off the bike for a few more minutes (I was getting pretty saddle sore at this point).

Once I was back in Hatfield the route headed off west again, and I just had about 24 miles to go, but was starting to slow down.  There were some small hills to climb going toward Williamsburg, and they took me a while to climb – my legs muscles were pretty sore and I did not have a lot of power to climb.  I had to stop for quick rests a few times before I got to the last rest stop, which I reached a little after 3:00pm.  There was some nice downhill riding immediately after this stop, heading into Williamsburg center, but then there were some more climbing bits heading from there to Northampton.

I managed the rest of the ride through Noho and back to Hatfield without having to take any rest breaks, but it was still slow, painful going.  I did finish in less time than last year, though, by about 17 minutes.  Total time was 9 hours and 28 minutes, covering 101 miles.  One thing I’m curious about is how fast I could do 100 miles if it were fairly flat.  Maybe that’s something I’ll try to do next year – we’ll see.

As far as the fundraising, this has been the best year yet – people donated a total of $1530 dollars to the Food Bank as part of my ride, and I have donated the same amount myself.  So glad that so much support has been given – thanks to everyone for stepping up, and if there’s anyone who still wants to give, you can do so through October 31 – just click here to give.