Blog : This Babe’s…er…Bud’s for You

If you’ve seen any beer advertising (and who can escape it?), you’ve probably noticed that it’s often something other than beer they’re selling in the ads. A billboard for Budweiser recently popped up in our neck of the woods – it’s on Route 9 as you head East over the river from Northampton into Hadley, which I do on my way to work – and it’s no exception. This one features only the torso of a woman with a bare midriff – and it’s a fairly inclusive definition of the midriff. The slogan at the bottom: “Expect Everything.”

Those familiar with the Pioneer Valley know that it is a place where anti-corporate sentiment, and feminism, not only thrive, but are loudly proclaimed. This billboard might as well have had a big target painted on it. It wasn’t long before the ad got reinterpreted through spray paint.

At first, it was changed to say, “We Infect Everything.” I saw this as some contractors were starting to remove the graffito, though I didn’t get a picture of it. The sign then had another week in its original form.

Then, it got altered again. Over Easter weekend, the “Everything” was
blacked out, and new letters painted in the same spot. This time, it was like that for a few days, and I got a picture: 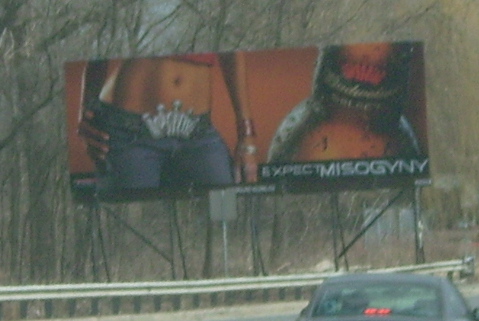 “Expect Misogyny” I couldn’t have painted it better myself. Am I against sexuality, you ask? No, of course not. The point is that we’re bombarded with ads all the time that objectify women – reduce them to a sexual commodity rather than people – and someone decided here to call it like it is. The tough issue for me is the whole defacement of a billboard issue. I’m amused by what was done, but I certainly want to be careful about giving blanket approval to making political statements
in this way. I’d certainly feel different if Planned Parenthood put up a billboard about contraception, and it got defaced with an anti-abortion message. Of course, Anheuser-Busch is a much bigger and different kind of organization (and has much deeper pockets), so it’s not exactly a morally equivalent situation, but still.

I’d be very interested in any comments on this topic.

Also, I’m certainly not the first person to blog this.