Blog : The Bad, the Worse, and the Ugly

The Bad, the Worse, and the Ugly

Spring is the time when young Ann Arborites’ fancy turns to thoughts of terrible cinema. Those thoughts are directed at the Smithee Awards, a presentation that recognizes bad movies for their lack of accomplishment (Smithee web site here, Smithee blog here).

The show is put on by some friends of mine and I’ve attended many times in the past. I went this year, and here is my report.

One of the integral aspects of the Smithee Awards is that the awful movie clips are accompanied by unhealthy snacks. Sugar and fat of many varieties are provided by the organizers and contributed by audience members, often in very bizarre or scary forms (Vegemite is a regular offering). Because I was driving there, I wanted to make a unique contribution, so I brought unusual beverages that can only be found in the Northeastern U.S. I brought a lot of them, as I bought them in different stores at different times, so I didn’t realize how much I was bringing until it was all assembled together. Varieties included Moxie and Diet Moxie; Polar Pomegranate, diet Pom, Pineapple, and diet Double Chocolate; and Waist Watchers Diet Chocolate Fudge.

I didn’t get a picture of the drinks, but here are some food pix. First is an array of chips and crackers, including Cheesy Taco Cheezits 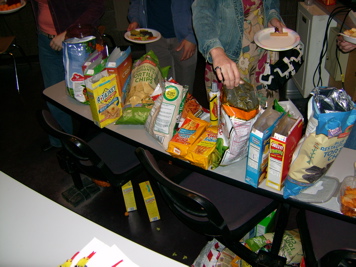 Here is the famous Smithee GORP, made of peanut M&Ms, yogurt-covered raisins, pretzel goldfish, and (substituting for the usual Froot Loops) fruity Cheerios. 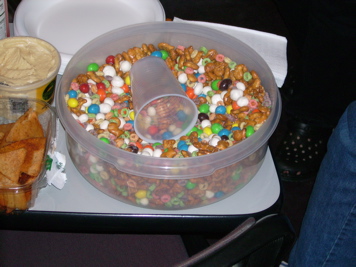 And, this was the 16th year of the Smithees, so a Sweet 16 birthday cake was ordered. Note the blood-red color. 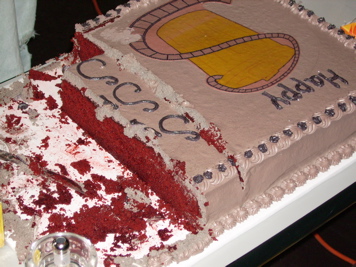 This year saw record attendance. Vote totals topped out near 190 last year – the highest then to date – and that’s where they started for the first award category this year. Soon after that, vote numbers went up well above 200, reaching 243 for parts of the night.

I got a picture of the crowd at the beginning of the evening: 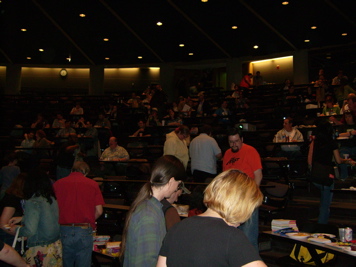 At 2 points during the ceremony, people were asked to write their names on ballots for a drawing, and winners were selected for lovely prizes (Smithee buttons and monster hand puppets). Here are some pics of the winners: 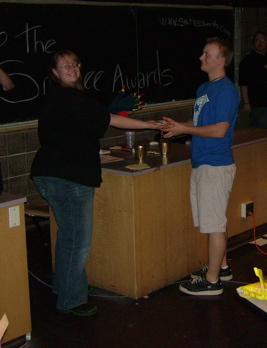 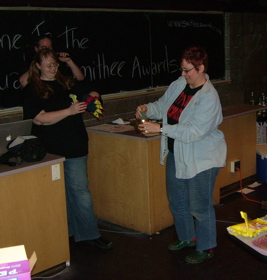 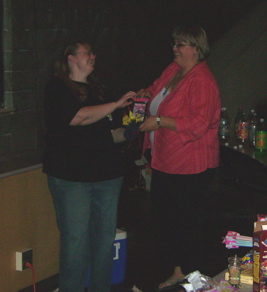 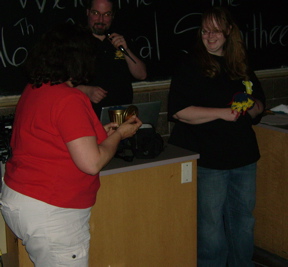 The hand puppets this year were of the monster Orochi, whose film did not appear in this year’s show. Here is a close-up of one of the puppets: 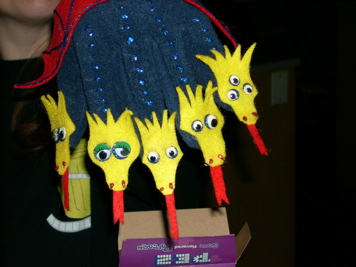 After the show, an audience member was asking where the Moxie had come from. I replied that I’d brought it from Massachusetts. He thanked me for doing so, as he hadn’t had it in some time (he was from Maine, and so grew up with the stuff).

Once everything was over, the organizers and friends went to Pizza House for normal food and such. Here are some pics of the gang: 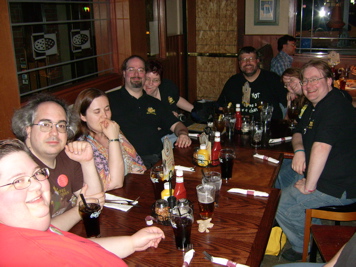 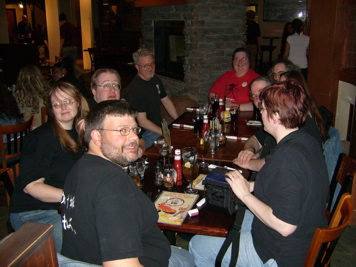 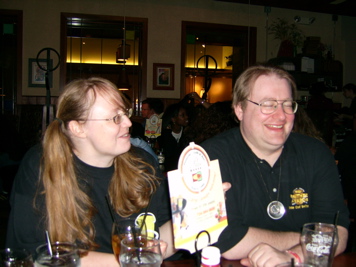