Blog : Sean bikes in the water this time

Sean bikes in the water this time

I went for another training ride today. This one was shorter, but with more significant (i.e. steeper) hill climbing. It was also raining for part of the time I was riding. The rain almost deterred me from riding, but I eventually decided it might be useful to try riding in the rain, because it may very well rain when I do the actual ride.

When I set out, it was drizzling a bit, and started to rain lightly soon after, so I put on the rain poncho I’d brought. It covers part of my arms, all of my torso, and my head (the hood fits nicely under my helmet). In theory it would cover part of my legs, but it rides up or flaps off of my thighs as I ride, so my shorts, as well as shoes, got wet.

On this ride, I headed South from Noho on Route 5. This took me through a bit of Easthampton and into Northern Holyoke. I turned off of that road to ride into the Eastern entrance to the Mt. Tom State Reservation. You can see the entrance road on this map, marked as the main entrance (the road is actually called Reservation Rd.). I fancied that I might ride on one of the park roads that actually goes up a mountain (Mt. Nonotuck), but what I didn’t know, since I didn’t pay attention to the topographical markings on the map, is that the park road rises quite a bit just getting to the junction of the other roads. This was a steeper climb than the hills I’ve ridden before, so I was tackling in first or second gear, and had to stop and rest frequently because my heart was pounding. I was certainly sweating quite a lot, though I didn’t notice it so much given that my face was already wet with rain.

The road finally leveled off near where it crosses the M-M Trail, and shortly after that I came to the crossroads.Â  Instead of turning right and heading up to Mt. Nonotuck, I turned left and took the road less mountainous (and that made all the difference…).Â  That road progresses evenly for quite a while (heading Southwest, BTW) and one encounters four scenic lookouts along there.Â  It was still raining, though, so the only thing I could see from the lookouts was fog and rain, with maybe a hint of Easthampton.Â  The road then descended a little ways, and I exited the reservation onto Route 141.Â  I turned right there and headed North into Easthampton, which involves a big downhill portion.

While I was on 141, the rain stopped, so I took off the poncho and stashed it once I was in downtown E’ton.Â  Then, I got on the Manhan Rail Trail, and rode that back Northeast to Route 5.Â  As I headed back into Noho, crossing the Connecticut River Oxbow, I took a little side trip to the Oxbow Marina.Â  Since there was no longer rain coming down, I felt safe taking out my camera, so here are pictures from the marina area: 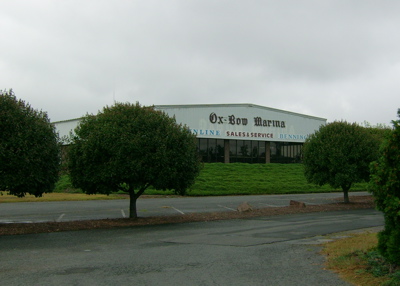 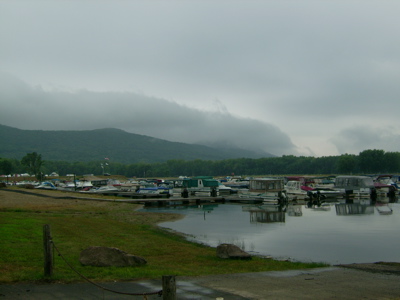 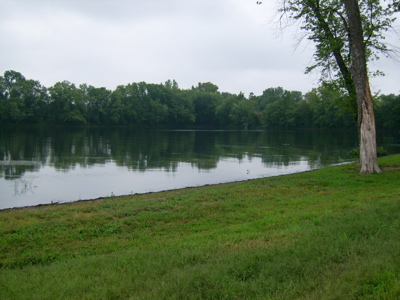 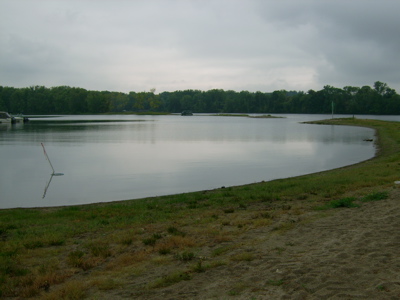 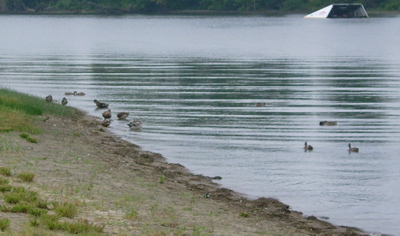 There are some soccer fields by the marina, withÂ  a nice view of the mountains in the Mt. Tom reservation: 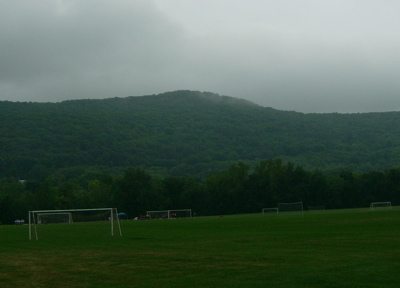 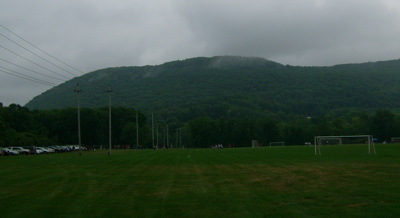 The clouds seemed to be clinging to the summits.

From there I headed back through downtown Noho to home to dry out.Â  Total distance today was only about 21 miles, but I certainly got a nice taste of climbing.Â  Next weekend I’ll hopefully get in another 40-mile plus ride (dry weather would certainly help with that).Â  Maybe I can get more than one ride in…

Also, donations for my ride exceeded my goal of $500, so I’ve raised it again to $750, in case there are more people who wish to give.Â  Thanks to all of you that gave so far!