Let me mention another online comic. Dicebox is a comic I’ve been reading for just over 5 years now, and it is a planned long-format story (it’s just about 25% of the way finished currently); you could call it an online graphic novel. As to genre, it might best be called anthropological science fiction. It follows 2 main characters, Molly and Griffen, who move from planet to planet in search of work but with seemingly no overarching plan for their lives. There are certainly interesting aspects to the worlds they find themselves on, as well as interesting technologies, but this comic is all about character development and interactions. 5+ year in the reader is still finding out stuff about the characters all the time, and the creator, Jenn Manley-Lee, is great at writing her characters, dialogue, and situations.

What I really love about Dicebox, though, is the art. It’s beautifully toned, as though it were painted. In fact, while she pencils the comic by hand, the coloring is all done in Photoshop.

This past December, she announced that she wouldn’t be updating for a few weeks, but offered that the first dozen or so people who e-mailed her could get custom watercolor
images of characters from the comic for a mere $15. I jumped at the chance, and actually got in under the wire.

I asked simply for Griffen wearing the long coat that can be seen on the comic’s front page and in the first chapter.Â  The painting I got is below (click image for a high-res version): 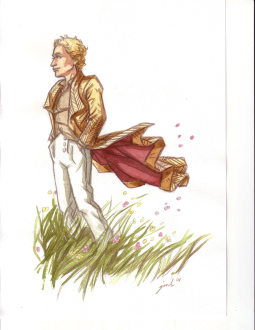