Blog : No, the other comic convention

No, the other comic convention

Earlier this month I headed down to NYC for the MOCCA Art Fest. MOCCA is the Museum of Comic and Cartoon Art, and it’s located in Manhattan. The Art Fest is a small press convention they put on each year. I call it the “other” convention because there was another, larger con going on in New York the same weekend – the Big Apple Comicon. That one held no interest for me, though, as it would have been dominated by the big companies and superhero comics (plus probably a lot of non-comics stuff).

The trip to the city began with me driving down to Norwalk, CT, where I got on a train into Manhattan. That let me off at Grand Central Station, where I got onto the subway. Before going to the subway, though, I had to be a typical tourist, and take some pictures of the station’s famous main concourse (hey, I’d never been to Grand Central before). I took some pix from the topof the steps, showing other tourists taking pictures: 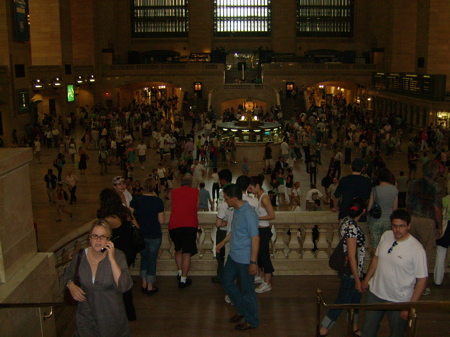 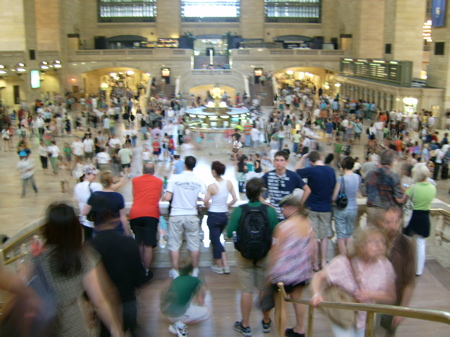 and then I went down to the railing on the landing to get a less obstructed view of the floor: 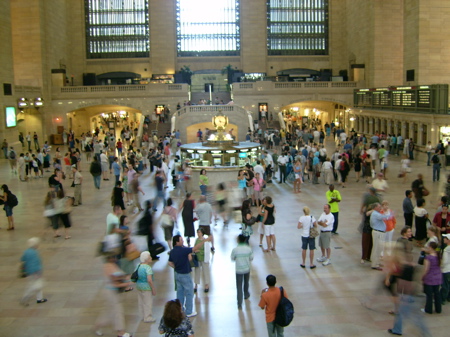 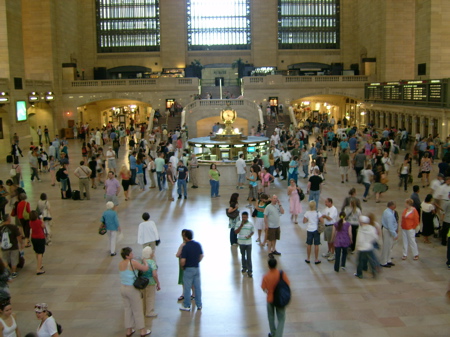 The con was held at the Puck building in Soho (it’s located just South of Houston St.), which is a couple of blocks from the actual museum.

I got to see a number of comic artists I like, and have photos of some of them. First off, one of the first people I saw was Andy Runton, who does the cute all-ages comic Owly. 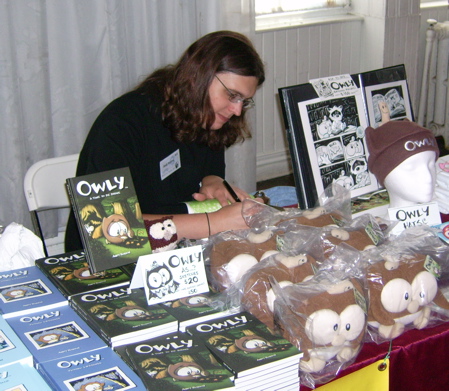 I had him sign a book that I’d brought, and I picked up a copy of the first book and got it signed for my nephew, who will have his 4th birthday this Fall (don’t tell him!). The person who had been in line right before me had given Andy a present – a little crocheted Owly: 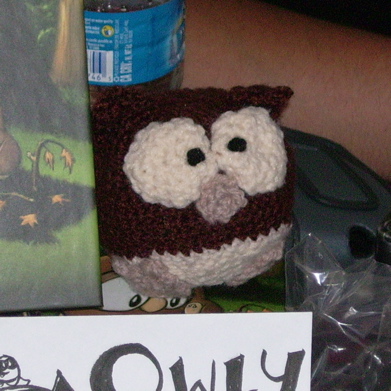 Most of the convention took place on the first floor of the building, but there was also some space being used on the seventh floor. For some reason, while there was air conditioning in the former space, the latter didn’t have any. The temperature in NYC that day was in the upper 90’s. When I got up to floor 7, I felt extremely sorry for the artists up there. I’m glad I went up there, though, as I got to meet Spike, creator of Templar, Arizona (which I reviewed here not so long ago). 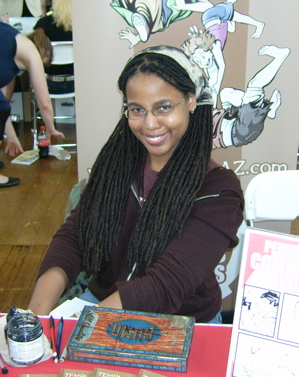 She was doing sketches for free of her characters, so I asked for one, and she spent quite a while working on it. I was amazed she went to that much work for free. Of course, I have pre-ordered both book collections so far of the strip, and mentioned that. The money from those pre-orders is what allows her to pay for the print runs of the books. Still, since she had gone to the effort, and it was so stifling up there, I bought her a soda (what are fans for if not to do favors for artists, after all?).

One of the guests of honor at the con, and someone whose presence made me feel I had to be there, was Lynda Barry. If you don’t know who she is, you obviously weren’t reading alternative weekly newspapers in the ’80’s or ’90’s. She drew the very long running Ernie Pook’s Comeek, as well as writing a couple of novels and some other comics. As her contemporary Matt Groening has said, she is the funk queen of the universe! I happened to go to the table where she would be signing just before her scheduled signing time. I ended up being 4th in line when she started. She was very friendly and enthusiastic, grasping my hand in both of hers when I greeted her. I bought her new book, What It Is, which is sort of a treatise on writing, and had her sign a couple of strip collections. I pointed out that one of the books was my favorite, because of the dialogue on the cover. She said she didn’t think she’d read that dialogue since the book was published in the early ’90’s.

Some pics of her: 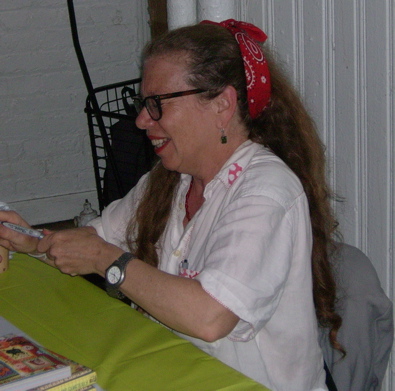 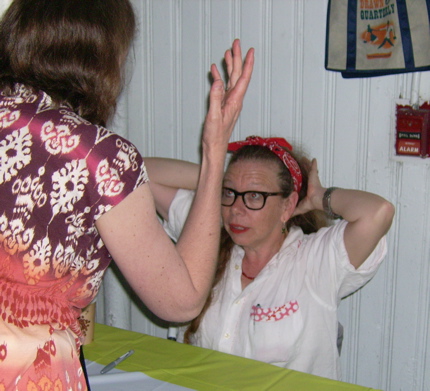 Toward the end of the day, Shaenon Garrity was signing at the Friends of Lulu table.Â  I had found out only a few days earlier that she was going to be there, making a rare East Coast appearance.Â  I took advantage of the opportunity to have her sign a couple of Narbonic books. 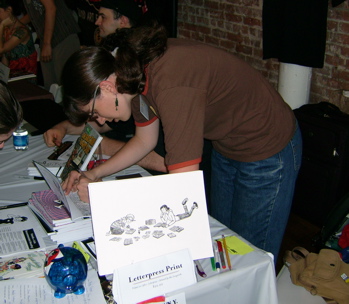 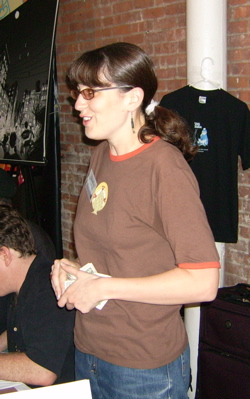 Other artists I visited (but did not take pictures of) include Jim Ottaviani, Keith Knight, Pat Lewis, Jessica Abel, Jennifer Camper, Mo Willems, and Stan Yan.Â  I recommend them all.

While on the sweltering seventh floor, I took some pictures of the view.Â  This is looking West along Houston St.: 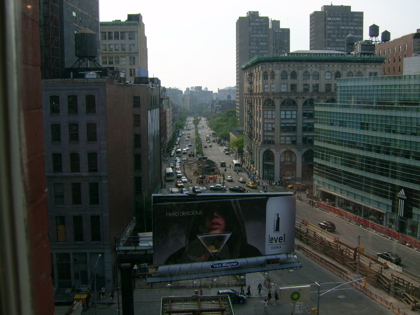 and this is looking North, sort of along Lafayette: 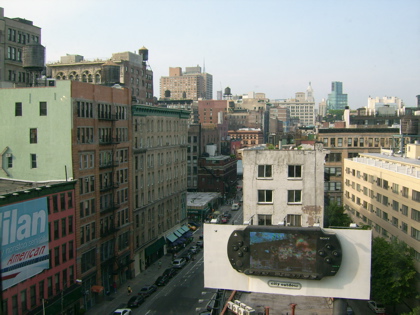 After the con floor closed for the day, I went for a walk to look for dinner.Â  Before actually settling on a restaurant, I wandered over to the Hudson River area.Â  There’s a bike path near the water, and I saw this memorial along the path: 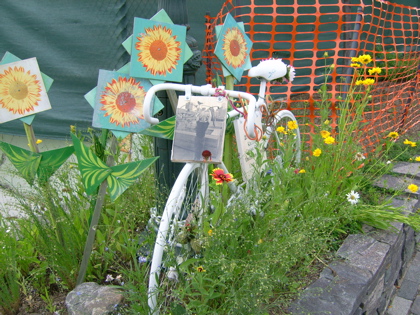 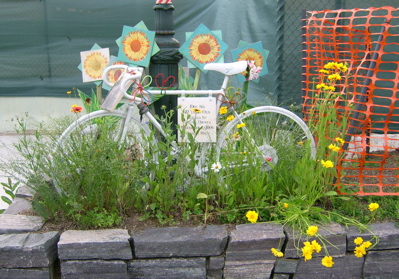 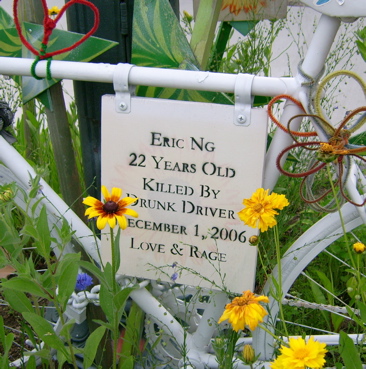 Then I wandered out on a pier (I forget the number) to see the river proper.Â  This shot looks downriver: 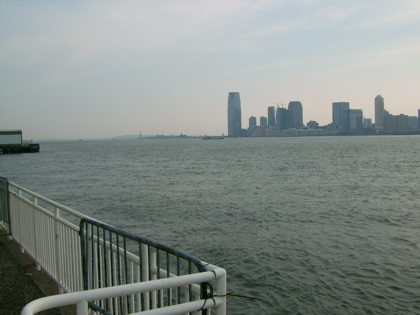 In the distance you can see the Statue of Liberty: 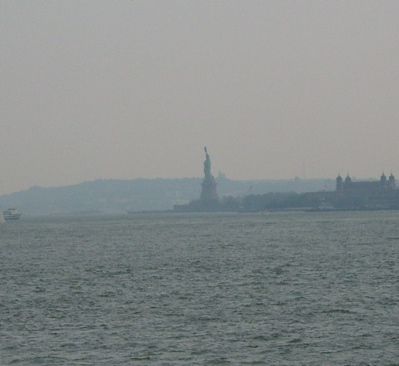 This is the view upriver: 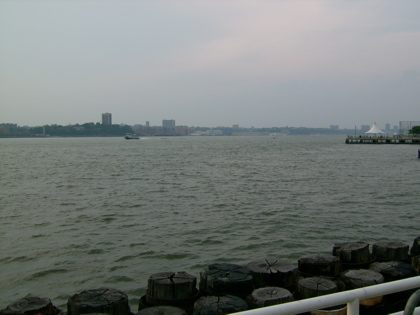 A firefighting boat was parked at the pier: 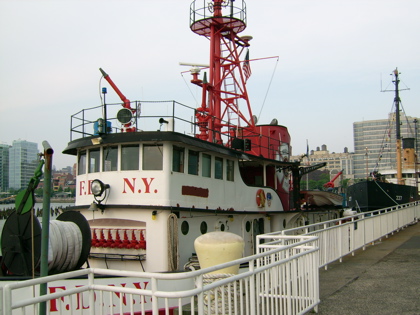 and heading back to dry land, I saw this view of the city: 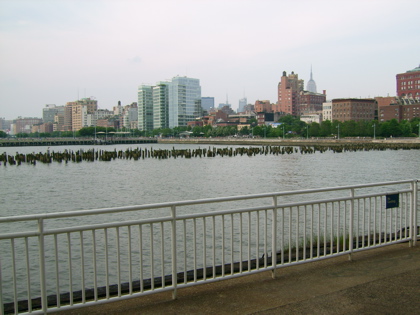 I had dinner at a nice Indian restaurant, in which I was the only diner.Â  This was probably because they had no air conditioning.Â  I didn’t care, as I just wanted t get off my feet and eat something.Â  After dinner I walked around a bit more, then went to the Lulu Awards ceremony at MOCCA itself.Â  Following that, I skedaddled out of town and headed for home.