Blog : MoCCA: MAD Man, Minus Minus

MoCCA: MAD Man, Minus Minus

A few weeks ago I traveled to NYC for the day, and attended the MoCCA Art Fest – an indie comic convention that I’ve been to twice before.

As I did last year, I drove to Norwalk, CT, and then took the train into Grand Central Station.Â  I was able to walk to the convention from there, as they were holding it at a new venue – the 69th Regiment Armory on Lexington Ave.Â  It was about 16 blocks South of the train station.

On my way down to the con, I discovered that several blocks (6 to 8?) of Lexington were closed off for a street market of some kind: 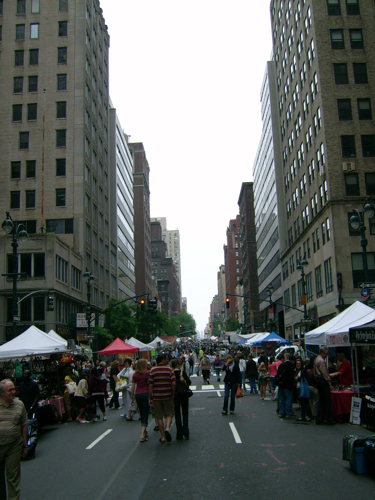 There were several booths selling clothing, jewelry, souvenirs, etc.Â  as well as lots of food and drink booths.Â  I needed to get some lunch, so I got a chicken kabob/pita sandwich, and ate it while I walked the rest of the way.

The con was supposed to start at 11:00am.Â  I got to the building at 11:40 and found that they hadn’t started admitting people yet.Â  Apparently, movers were late getting con supplies there and unloading, so the organizers were still getting setup.Â  The line to get in snaked around the corner and halfway up the block on 26th St.Â  After I got in line, many more people lined up after me, eventually snaking around the next corner.

Here’s the line in front of me: 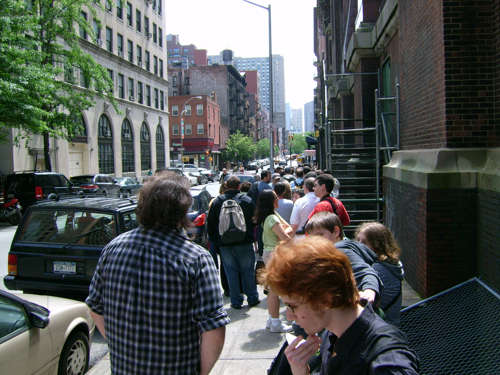 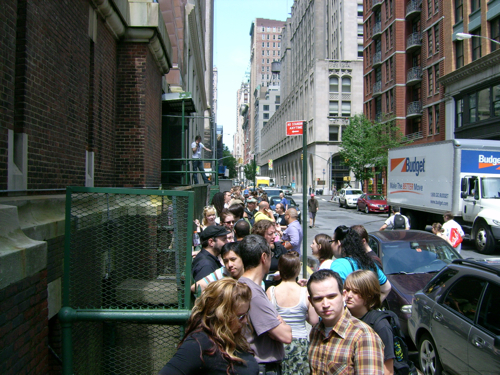 I was standing in the sun, and hadn’t brought a hat (or any sunscreen).Â  Fortunately, I had my laptop bag with me (sans laptop) that I was able to hold on top of my head (and managed to balance it there for quite a while).Â  It provided much needed shade.

While waiting in line, I saw this gold topped building: 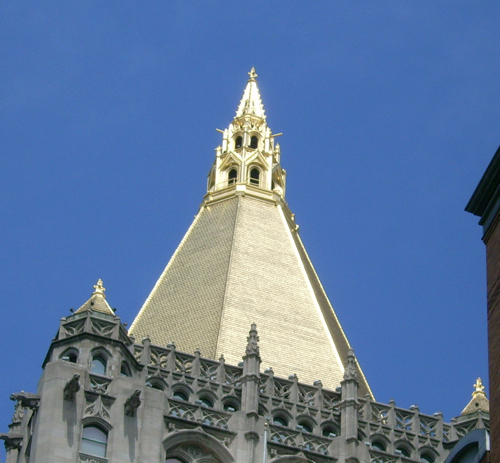 Not sure what it is (I haven’t tried looking it up – anybody know?).

The line finally started moving around 12:30, and within 10 minutes I was inside.Â  Unlike previous years in the Puck Building, they had all the exhibitors in one big space (so big I couldn’t get it all in one picture): 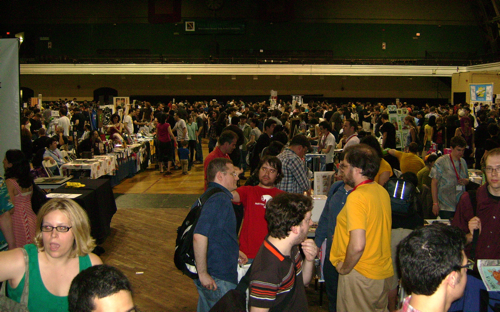 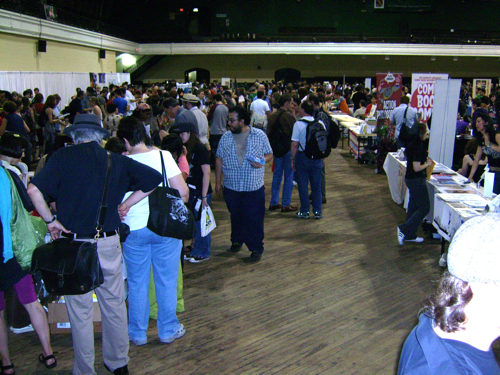 A brief rundown of people whose tables I visited, in no particular order:

Jim O. was supposed to be debuting his new book at the con.Â  It’s called T-Minus, and it’s about the space race leading up to the moon landing.Â  It was written by him and drawn by Zander and Kevin Cannon.Â  Unfortunately, Jim’s agent, who was supposed to be bringing the copies of the book for Jim to sell, never showed up.Â  Jim sold plenty of his older books, but it was still disappointing for him.Â  The Cannons were there as well, at a separate table, and they had some copies they’d apparently gotten from their local comic store.Â  I ended up buying the book from them, and then taking it to Jim for a signature.

I went to a few panels during the day.Â  The first was the Comics Bakery panel.Â  That’s the name of a collective of 4 artists: Raina Telgemeier, Dave Roman, Marion Vitus, and John Green, and the panel was them going through the history of how they all met and started collaborating, and eventually got married (well, they’re 2 married couples).Â  Here’s a pic of 3 of them (Vitus, Green, and Telgemeier) during the panel: 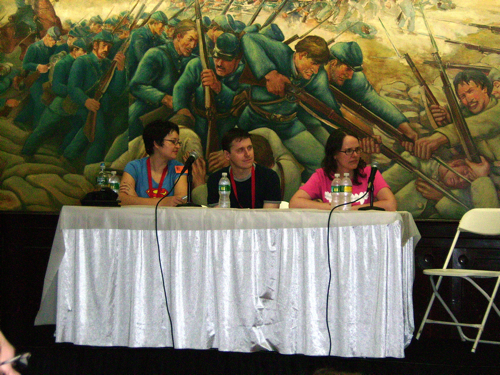 The room where the panels were held had murals on all 4 walls of scenes from the Revolutionary and Civil Wars (it is a National Guard building), which made for an unusual backdrop for the presentation (why no, there’s nothing distracting about Confederate soldiers being bayonetted by the Union Army!).

The second panel I sat through was less interesting.Â  It was about the state of comics publishing, and had 7 publishers on it.Â  Not much to report from it.

The third panel was about the humor magazine Humbug.Â  I had never heard of it before this con, but it was apparently published for 2 years in the late ’50’s, and involved 5 writers/artists, some of whom had worked for MAD Magazine.Â  Two of the founding members were on the panel: Arnold Roth and Al Jaffee (left and center, respectively): 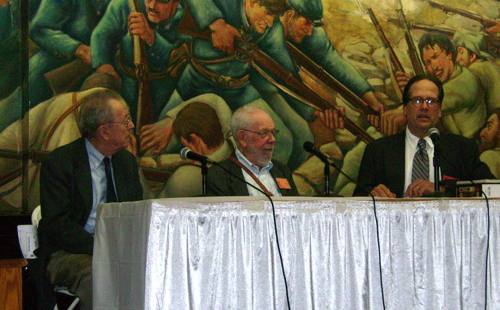 They talked about working on Humbug, and various other topics that may or may not have been related, and were pretty funny throughout.Â  Jaffee was the reason I was there, as I am very familiar with him from reading MAD. 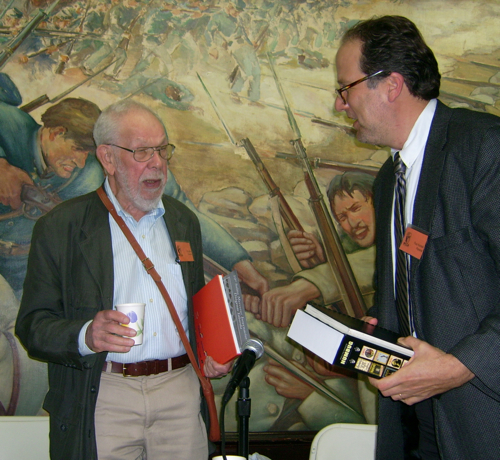 This was him talking to the moderator after the panel.

Al Jaffee wrote and drew various features for MAD, including ‘Snappy Answers to Stupid Questions’.Â  He also was responsible for the MAD Fold-In, which was always on the inside back cover of the mag, and featured an image and question, which yielded a different image and the answer when you folded the right side over to meet the left side.

After the panel, Roth and Jaffee were doing a signing.Â  I have a bunch of old issues of MAD from the ’60’s that my Dad had collected, and though they’re falling apart, I still have most of the covers.Â  I brought a few fold-ins with me for Jaffee to sign. 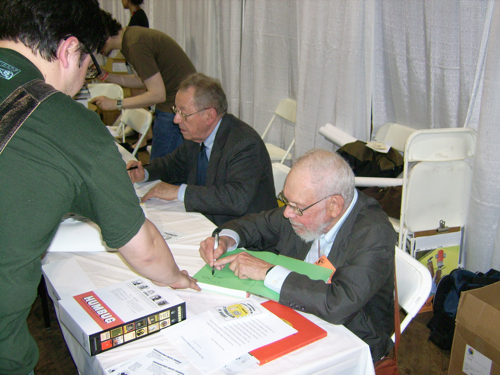 Click here to see the fold-ins, and to “fold” them.

The con ended for the day at 7, I went and had a lovely dinner at a Middle Eastern deli, and then walked back to Grand Central to head home.Â  The end.