Earlier this year, I signed up for a new offer from They Might Be Giants called the Instant Fan Club.  One of the benefits of the membership fee was 2 free tickets to any show on the band’s then upcoming tour.  Once the tour dates for 2011 were announced, I saw that the band would be performing not too far from where I live – they had a concert scheduled in September in Great Barrington, Mass.

In June I wrote to the fanclub address to request tix to that show (for me and my TMBG-liking partner), and asked where in the theater the seats would be.  The response I got said my tickets would be waiting for me at will call, but they couldn’t give me exact locations – though they try to reserve a block of seats in the center of the main floor.

Eventually, the day of the show arrived.  Great Barrington is a little over an hour’s drive away, so it’s fortunate that the show was on a Friday night, and I didn’t have to work the next day.  We headed out just after dinner, and found the venue (the Mahaiwe theater) about 15 minutes or so before showtime.  We found parking and started walking over there.

We had to cross the main downtown street on the way, and I noticed this set of instructions at each end of the crosswalk: 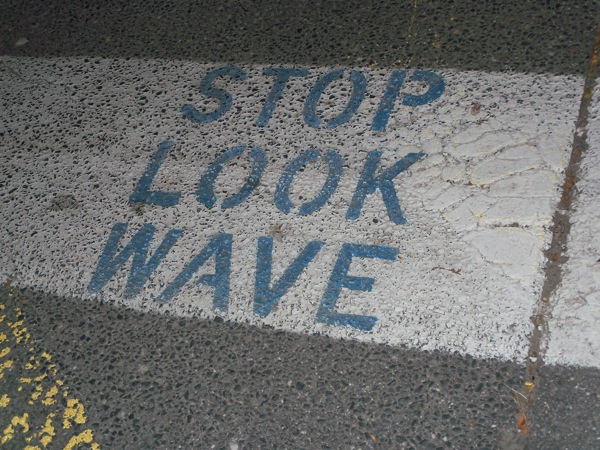 I don’t think I’ve seen this in other towns, and certainly never thought of waving to drivers as being an official thing.  I guess it is now.

We got to the theater and went to the will call table.  They did not have tickets in my name, and when I mentioned the fan club they said I needed to get in the line for the regular ticket booth to pick those up.  So, we waited in line for 5 more minutes or so (there weren’t that many people in line, but each one seemed to be taking a while).  I asked the guy in front of us if he was getting fan club tickets, and he said no, that he was just buying a ticket for the first time that night.  Eventually we got to the window, and I mentioned the fan club and my name.  The ticket seller consulted a list, then printed out 2 tickets.

While we waited in line, we heard the opening act (Jonathan Coulton) start playing, and it looked like the ushers were not going to allow audience members to enter the theater during the first song.  That is a policy I’ve never seen at a rock concert, and I didn’t know what to think.  Eventually, though, the staff seemed to relent, so by the time I got our tickets, the doors were staying open.

Before going in, we stopped at the merchandise table, because my club membership also entitled me to a free goodie bag.  Once I secured the bag, we headed to the first usher – who immediately questioned what I had in the bag (even though the merch table was in full view of her – about 10 feet away).  Once we assured her that we weren’t bringing food in, we were pointed to our seats by a set of ushers.  Those seats turned out to be in the balcony, several rows back, and way over on the right side.  They were not good seats in the least.  What’s more, the guy who we had talked to in line, who was just buying his ticket then, was in the row in front of us.  It seemed clear that the fan club had merely provided a list to the venue of people who would get free tickets, but there was no reserved block of seats involved.  Once we showed up, they gave us the next available seats in the place.

The ushers were actively policing people with cameras, so I could not take flash pictures.  The unfortunate thing with my camera is that if I turn off the flash, and don’t have a lot of light, I get blurry pictures.  So this is the best picture of Coulton (and his 2 backup musicians) I managed to get: 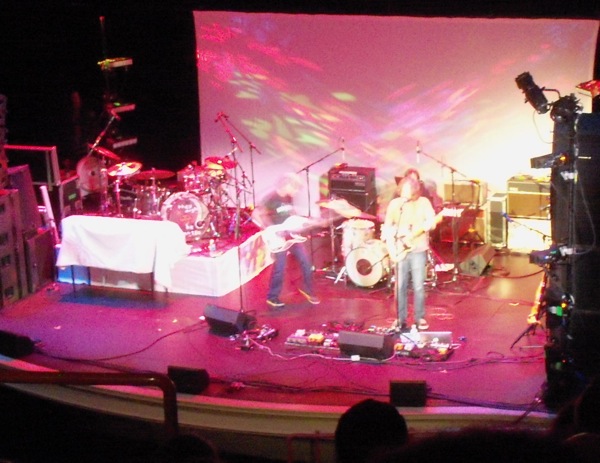 Coulton’s set was okay.  I have heard and enjoyed a few of his songs before, but I’m not a fan, and he seems kind of lackluster live.  It’s possible that I would have enjoyed his set more if I hadn’t been annoyed about the crappy seats, but I’m guessing I wouldn’t have found it much more enjoyable.

The Coulton set was fairly short – about 7 or 8 songs, I think.  After a not-too-long intermission, TMBG took the stage.  It was just the 5 regular band members that evening – John Flansburgh, John Linnell, Dan Miller, Danny Weinkaupf, and Marty Beller.  No horn players were there, as had been the case the last few times I’d seen them.  Still, TMBG always manages to be fun, and even being far away didn’t dampen my enthusiasm.

Here is the best image I was able to capture of the band: 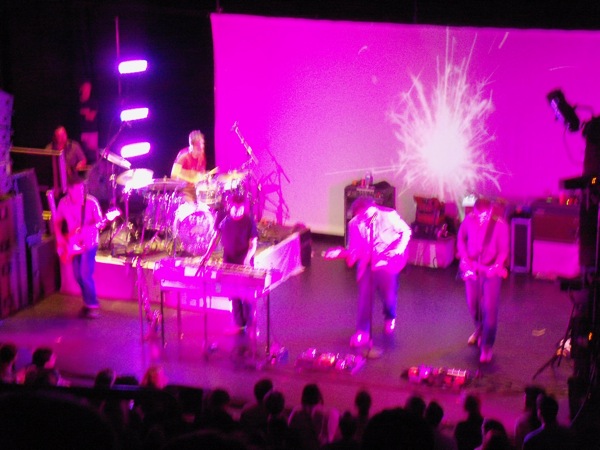 They had projections going on behind them during most of the show.

Here is the setlist (songs from the new album “Join Us” are marked with an asterisk):

During Cloisonné, Flans accidentally backed into Linnell in his fervor.

The next 2 songs were performed by the Avatars of They (i.e. the hand puppets, held up to a small camcorder and projected)

Flans then divided the crowd into left and right halves for an Apes vs. People shouting contest.  The band played music and alternately had the sides of the audience chanting “Apes! Apes! Apes!” or “People! People! People!” as appropriate (we were on the People side, but the Apes were judged to have won by the band).

They went off the stage at this point, then came back for an encore:

Another exit, and then a second encore:

This was the first time in many years that I’d heard them play Lie Still…  In the past, Flans had played a midi-enabled stick that he banged on the stage as percussion, while Linnell played a baritone sax.  In this case, Flans had a little synth/effects box of some kind, as Linnell played a bass clarinet (which was also L’s instrument in Cloisonné).  Another notable thing about the show is the large number of songs from the album Flood that were played.  7 of them, compared with 9 from Join Us.  I suppose that they’re used to playing Flood songs since they’ve done a number of Flood shows in recent years, playing that whole album in order.  Nevertheless, it’s a shame to have no songs from several of their albums (this concert, for instance, had no songs from Apollo 18, John Henry, or Factory Showroom).

By the time we left, I did think it had been a fun evening, but I still was somewhat miffed about the seating.  I e-mailed the fan club to ask about it, and if this is what was planned to happen, or if the band hadn’t had control over it, or what.  I didn’t receive an answer.

As for the contents of the goodie bag, I got an Instant Fan Club t-shirt, a button to pin on, 2 window decals, and a piece of paper that was stamped and then signed by all of the band members.  Pretty neat stuff: 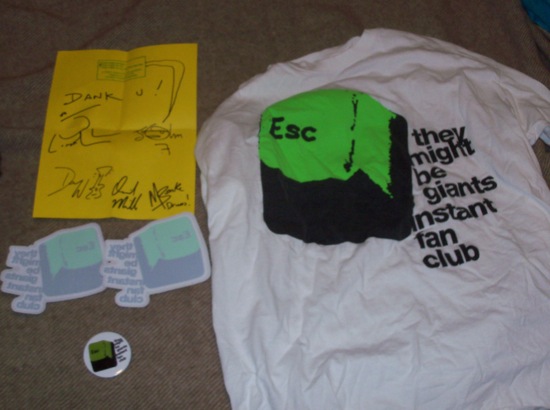 Since that concert, TMBG has announced tour dates for the early part of 2012.  It turns out that they’ll be playing in Northampton in March, so I expect that I’ll buy a ticket for that, and enjoy better placement in the crowd.