New Wheels Go for a Spin

So this year I decided to get a new bike.  Just as 4 years ago I bought a hybrid because I wanted something faster than my old mountain bike, I wanted to upgrade to something lighter and faster than the hybrid (and that I could take on longer rides).  I visited my local bike shop (which is partly owned by my neighbor) to look at road bike models, as well as looked for used ones online.  One thing I found was that a lot of road bikes don’t have places to screw in bolts for a rack, and I definitely wanted a rack for almost all my trips (but especially for long distance biking).

I found that there are a few models of bike made especially for touring, which sounded like they were up my alley.  I talked to the bike shop guys some more about good touring bikes, and they had an instant recommendation (which some of them ride).  They even had one of the previous year’s model in stock that they could give me a discount on.  So, I went for it.  Here is my new bike, the Specialized Tricross: 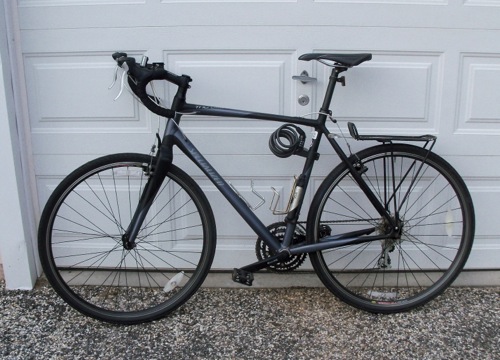 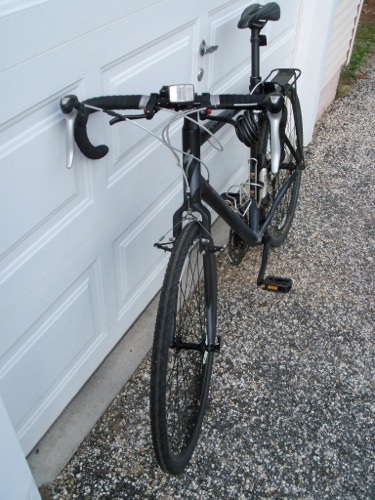 It’s got a light, aluminum frame, with drop-style handlebars like a road bike.  The tires are a bit wider, though, like what you find on a hybrid.  It’s got 27 speeds.  It basically is good for a lot of different situations.  It’s not the speediest bike for road riding, but is a bit more comfortable and durable for long rides, especially if one has to ride on bad pavement or dirt.

One thing that’s very convenient about the bike is that, for the most part, the brake and shift cables are tucked inside the frame tubes, rather than being suspended on the outside.  That allowed me to do things like mount the holder for the locking cable below the crossbar (wrapping it around the vertical tube), rather than putting it just under the seat as I had done on the previous bike (where it kind of got in the way of my rack-top bag).

I bought the bike right at the beginning of Bay State Bike Week in mid-May, and in the middle of the week, took it for its first ride.  I had volunteered to help out with the bike commuter breakfast in downtown Northampton, which was that Wednesday.  Even though rain was predicted, I rode over to Noho (in misty conditions) to the event, and stayed to help pack up when it was over.  It was drizzling by the time I rode to work, but the bike performed nicely, and I did seem to be moving faster than I had on my old bike.  By the time I was done for the day at work, the sun was out, and I had a more pleasant ride home (which was definitely a good 10 minutes shorter than it used to take).

Coming up: the bike gets a longer trial.