So, as promised, here is the full write-up on my 100-mile (actually more like 105-mile) bike ride for the Food Bank of Western Mass.

Will Bike 4 Food took place just over a week ago, and I showed up bright and early.  I arrived at the Food Bank’s headquarters in Hatfield at 6:30am.  It took a little time to park, get my gear onto my bike, and check-in, but I still had plenty of time to get some food (they had bagels, pastries, and fruit).

I also had time to take some pictures of the foggy start: 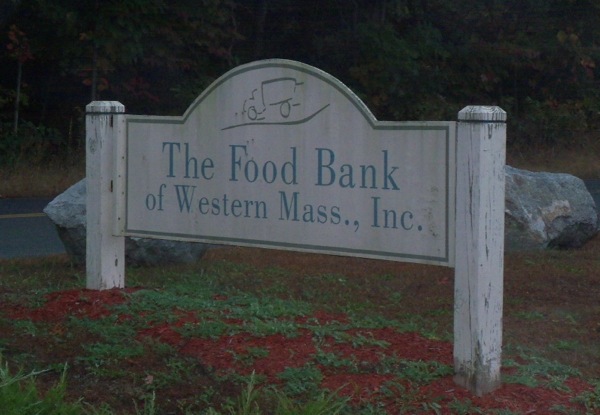 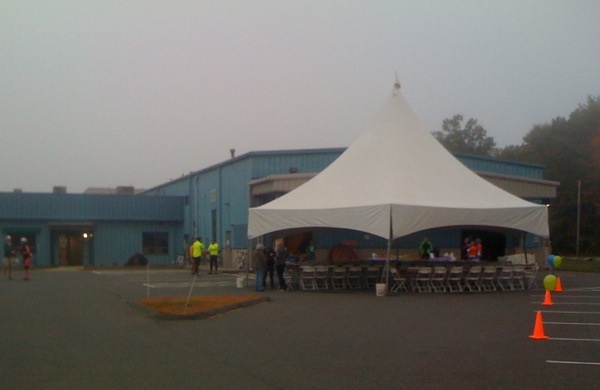 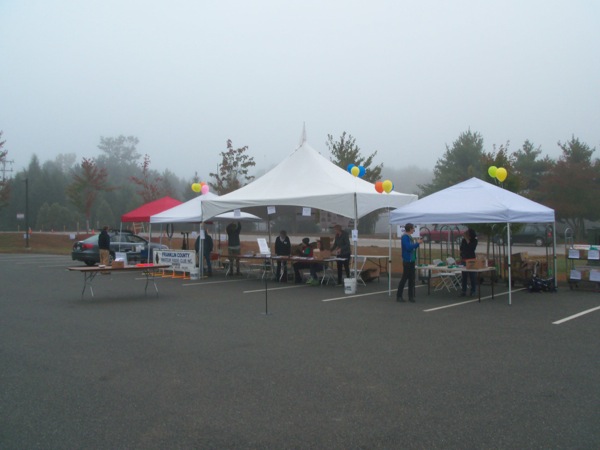 Unfortunately, my camera stopped working while I was taking these.  It seemed to run out of power.  I tried swapping in the batteries from my headlight, but it still would not respond.  That left me with only my (old) iPhone to take pics.

The ride was due to start at 7:00 for those riding the century route.  There were apparently 37 people signed up for that route, but only about 10 of us were in evidence at that time.  They ended up actually sending us off at 7:10, though I saw 1 or 2 riders who took off earlier on their own (I later found out that about half of the people signed up for this route didn’t show up to ride – maybe some of them had knee problems?).

I got ahead right away of the other riders I started with, though I didn’t expect that to last.  We actually started climbing the first hill just 2 miles into the ride, and most of the other riders passed me pretty quickly on the way up.  While climbing this hill, the fog lifted and the sun came out, though it remained chilly for a while.

The ride progressed west at first, heading through Whately on some roads I wasn’t familiar with, eventually making our way to Williamsburg center.  We then headed north through Conway and into Ashfield, on the same road that I’d ridden just the previous weekend.  By this time, there was another rider hanging out by me, a young guy named Jack who had come up from Springfield.  He was a little better on hills than me, staying at least a little ahead of me during the long climb to Ashfield, but I did slowly catch up.

The ride turned off that main road soon after entering Ashfield, and I was once again in unknown territory as we headed further west, and climbed up some more.  We were soon rewarded with a sizable downhill, though it was steep and curvy enough that I had to lay on the brakes (Jack was more daring and zipped ahead without braking).  After some mostly level riding, we got to route 112 and went south just a bit, then west a couple more miles on route 116.

A turn to the north on a side road soon brought us to the first rest stop, at the westernmost point of the ride.  I almost didn’t realize that it was the stop as we approached – I saw people in green t-shirts by a farm and thought there was some 4H function going on.  It was the place to stop, though, and I happily had some trail mix and refilled on water. 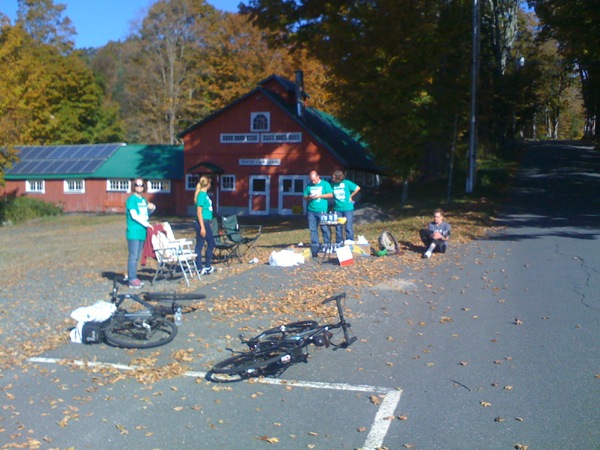 From there we went north a bit more, then started back east toward the town center (we were still in Ashfield).  On this leg, we passed a point that had been on the first Food Bank ride, where I’d seen a big cairn of stones by some power lines.  The cairn was no longer there – who knows when it got dismantled.  Maybe it just fell apart over time.

We passed through the center of Ashfield and headed northeast on some of the same route as in the Bikefest ride, but then angled a bit more southward into Conway, and then went south to Conway center, where the second rest stop was located. 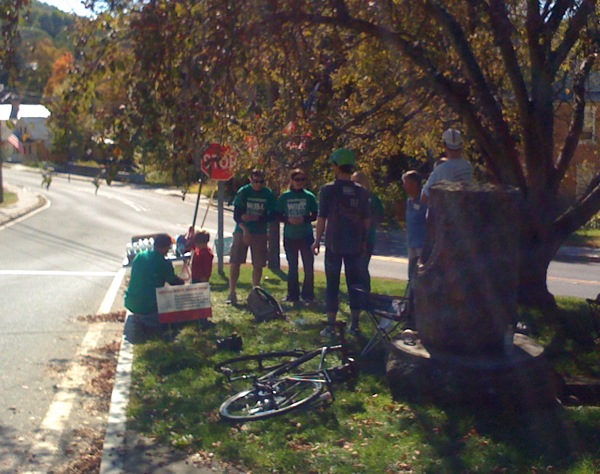 We knew there was at least one cyclist behind us, and some volunteers who were driving the route (in case anyone needed roadside assistance) confirmed that there was exactly one cyclist behind us.  She arrived while Jack and I were at this stop, and left before we did, so from that point we were in the back of the century pack.  Fortunately, it was not a race.

After this I was familiar with just about every road that took us back to the Food Bank.  We headed straight south out of Conway (up another moderate hill) down into Whately, and then headed eastward back into Hatfield.  Somehow I got far enough ahead of Jack that I lost sight of him, and he arrived at the Food Bank a while after me.  I got there right at noon, and was halfway done with the ride.

I took advantage of this stop to use the bathroom, then got a little more food, and ended up heading out for the second half close to 12:30.  I knew the remaining portion would be less hilly, so I still had some hope of getting back by the 9 hour mark, even though the first part had taken me almost 5 hours.  The riding was certainly flat for quite a while, as we headed north near the river, through Whately and Deerfield.  We got to the next water stop around 2:00, and that was located at the beginning of the bike path in the northeast corner of Deerfield.  The route then followed that path across the river and much of the way toward Turners Falls.

Before actually getting to downtown Turners Falls, though, we turned and crossed the river again into the east part of Greenfield, and climbed a gentle hill up to, and across, Route 2.  There was a bit more of climb after that, and then we rode into the town of Bernardston.  The ride was still fairly easy, but I was getting quite saddle sore by this point, and sometimes needed to stop and rest just to get off my seat.

Just a little ways into Bernardston, the route went west along a side road, and then the one big climb of the second half began, with the road rising and rising into the town of Leyden.  This was where I really slowed down, as I didn’t have a lot of energy or strength for the somewhat steep climb.  I had to stop and catch my breath almost right away, and I told Jack not to wait for me.  He pedaled on and was quickly out of sight (spoiler: I did not see him again the rest of the ride).

I had to rest a number of times heading up this hill, and even walked my bike up one short bit that felt too steep to pedal up.  When I was on a plateau near the top, a car full of volunteers drove up and let me know that the next rest stop (which would be at the bottom of the hill) was closing up, but that they would leave some fruit and water for me.  I managed to make it up the last little bit of hill, and then had a nice long downhill ride.  I got to the water stop, and this is what was left: 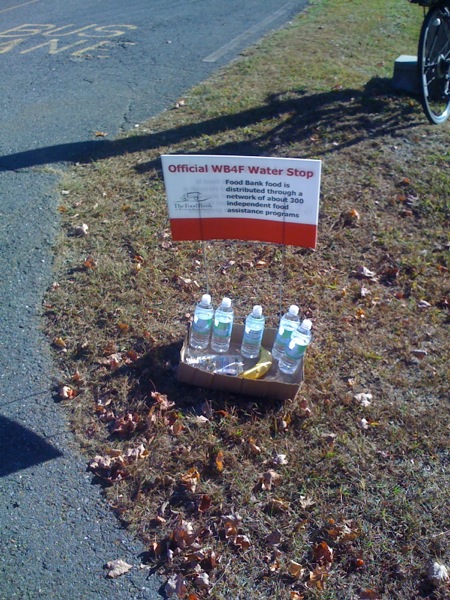 Actually, there had also been an apple.  I ate that before I took the picture.  This stop was in the parking lot of an elementary school: 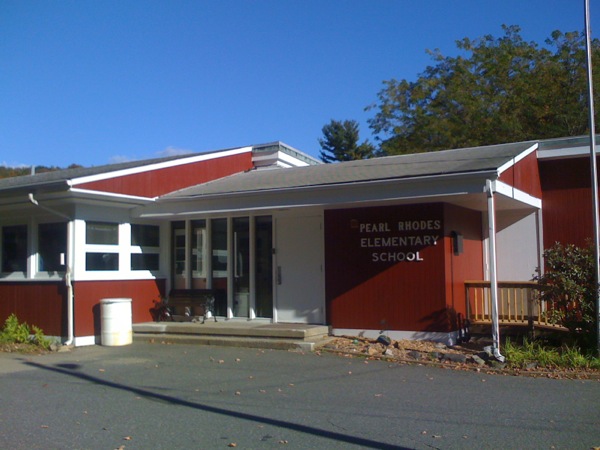 I think this is still in the town of Leyden.

From here I was a little unclear on which way to turn, as the school is at a T-intersection.  I didn’t immediately see street signs, and there were no left  (or sharp right) turns indicated on my cue sheet.  Most intersections had been marked with little arrow signs to show which way the route went, but there weren’t any here.  I ended up making a left turn and riding a mile or two before beginning to doubt that I was going the right way, as I still didn’t see arrows, so I doubled back to the school.  This time, I did see a street sign, and figured out that what I was calling a left turn, they were calling “continue onto X road” because of the angle of the intersection.  So, I had originally gone the right way – it was just going to be 5 or 6 miles before the next turn after that.  I went on, covering the same ground again.

By this time it had already been more than 9 hours that I’d been riding, so I was just hoping to get to the end before dark.  I headed down the road, still sore in a few places, and saw the same volunteer car pass by me, checking up on me.  Eventually I was back in Greenfield, and took the next turn, and soon got on a bike path along the Green River that I had never ridden on before.   It is a nice little ride, though this path is only a mile or so long.  On the path, I passed a black cat who was intently focused on something moving in the nearby underbrush (a chipmunk, perhaps?).  I didn’t take any more pictures, because I just wanted to make as good time as I could.

A little more climbing after downtown Greenfield took me to Deerfield, and more familiar roads.  And there was yet another little climb just after I crossed the Deerfield river (I had to walk my bike up 2 more inclines – ones that would have been no problem to ride up earlier in the day).  By the time I got into Whately again, it was getting dark.  Fortunately, I had my lights with me, as I’d used them in the fog when the ride started.  I continued as quickly as I could, still needing to rest frequently, and finally got back to the Food Bank just after 7pm.  There were still a few volunteers there (waiting for me to finish, as I was the very last rider of the day).  I felt a little bad for making them stick around, but everyone was cheerful, and thanked me for doing the ride, including the Director of the FB.  There was no food left from the after-party, but they had saved me 4 cups of beer (which were of no interest to me, though, as I don’t drink).

After calling home, I walked to the car (which was a ways away from the FB building), then realized my car key was still on my bike (which I hadn’t brought to the parking lot), so I walked back to the building to get the key.  A volunteer then offered me a ride back to the car, which I happily accepted, tired as I was.  I got the car, loaded on the bike, and headed home, where I pretty much ate some dinner, showered, and fell asleep.  I was exhausted and sore, and it took much longer than expected, but I did get through the whole ride.  And the next morning I felt much better (9 hours of sleep can do wonders).  I felt refreshed, and my legs were only a little sore as I headed to work (not by bike).