On April 12 of this year, I went to the town of Clinton, MA for a “Golden Spike” event where updates were provided on the Massachusetts Central Rail Trail (MCRT).  Presentations were given on each section of the trail, what had been done so far in terms of planning or construction, and what would be done in the near future.  Slides that were shown for each section can be viewed here.

There is still only a small percentage of the eventual statewide trail finished, but good progress seems to be happening.  The event also featured a keynote speech from the state’s commissioner of conservation and recreation, and some awards given to people who have been important in the development of the trail.

After the event, a tour was given of a former railway tunnel in Clinton that will become part of the trail in the future.  I couldn’t resist trekking through a dark and dank tunnel, so I went along on the tour.  This is the end of the tunnel near a major road (click on the pictures to view larger versions):

There are no longer tracks running through the tunnel – its floor is dirt and gravel.  One very interesting feature is that, while there are concrete walls near the ends, much of the sides and ceiling of the tunnel are just rough-hewn rock. 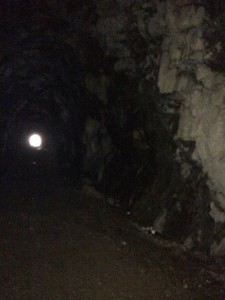 Even though it was a fairly warm day in mid-April, and there had been plenty of warm Spring days already, the interior of the tunnel was quite cool.  There were even large chunks of ice still to be found inside: 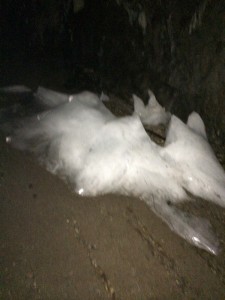 While the ground was merely damp through most of the length, there were large puddles at the far end, and some deeper water in the pathway beyond.  Here is the view out the other end: 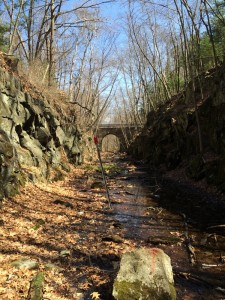 And looking back through the tunnel: 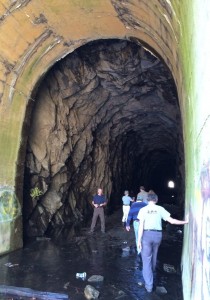 In the leaves next to one of the rock walls, a snake was lurking: 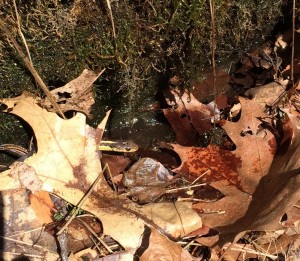 It emerged more as it checked out the people: 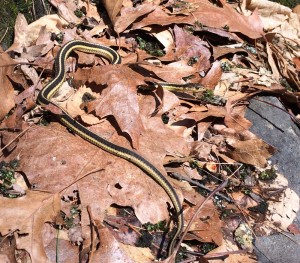 After seeing the tunnel, I walked over to the dam on the nearby river.  The Wachusett Dam creates the Wachusett Reservoir: 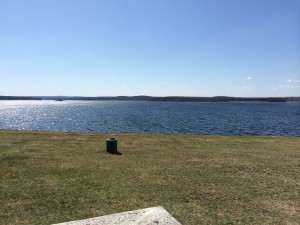 Here is the top of the dam, which is closed to visitors: 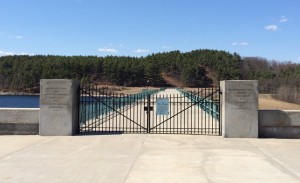 Off to the right (north) is the Nashua River: 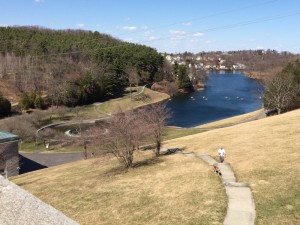 As well as a long stairway down to the bottom.

At the bottom, where the water emerges from the dam, there is a sort of fountain, which might be the way the water comes out from the reservoir: 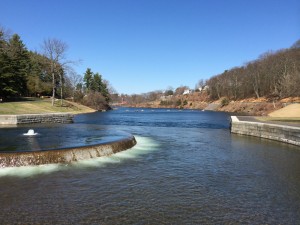 Also in that picture, there is a row of white dots crossing the river in the distance.  Those are the remains of pilings for the train bridge that used to connect with the tunnel.

Here is the dam seen from near its base: 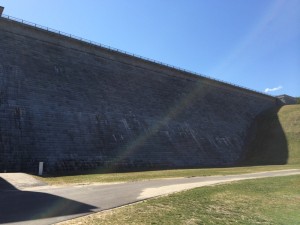 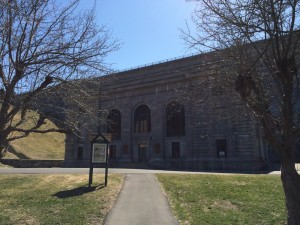 And the stairs back up to the top and road: 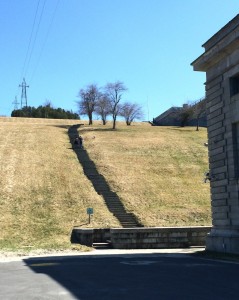 I counted the steps as I climbed back up: there are 194 of them.

Even though there is not a whole lot of trail running from Northampton to Boston, there are more sections complete than I knew about when I rode to Boston in 2012.  If I should do such a ride again, I can spend more of the distance off roads.  I certainly look forward to riding some of the other trail sections whenever I have a chance.