The weekend before I rode in Will Bike 4 Food, I rode a shorter route in the NCC Bikefest, as I have in several past years.  I again did the “metric century” ride (i.e. 100 kilometers, though this was longer – it was 73 miles, or about 117 km).

The route was slightly different than it was last year.  They had removed the really tough climb that was in the middle previously (at Bardwell’s Ferry), for which I was grateful.  They also made a change this year in that they no longer try to have all the riders on a given route begin at the same time.  There were suggested start times, but once a rider was checked in, the rider could leave whenever ready.  I ended up starting at 8:40, 5 minutes before the suggested time.

The ride headed west for a ways in Northampton, then headed northwest to Williamsburg center.  From there it climbed a long way up into Ashfield.  On the way there is this nice view in Conway (click for larger versions of photos): 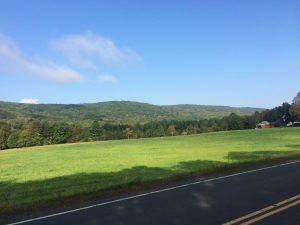 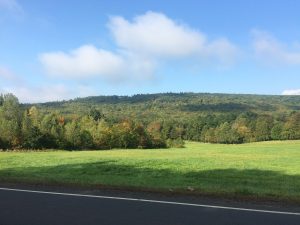 Once we went through Ashfield center, it was almost all downhill to Shelburne Falls.  The first rest stop was at the Glacial Potholes again. 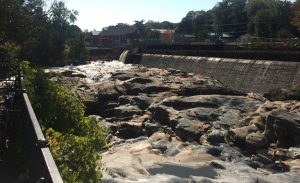 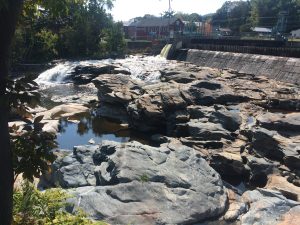 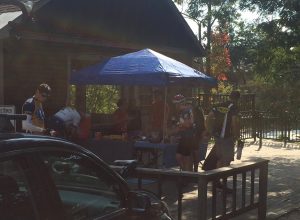 The rest stops on this ride were well stocked with donated baked goods (e.g. little muffins, apple and raspberry bars), as well as the typical packaged energy and granola bars.

From there the ride meandered through the town of Shelburne – a bunch of rural, hilly area.  On one road, there were some goats grazing just off to the side: 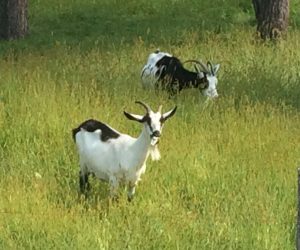 The took some interest in me, but I was not as interesting as the tall grass all around them.

There was more hill climbing here, including the steepest climb of the day, before a fast descent into Greenfield.  The second stop was in Greenfield by the entrance to the Franklin County fairgrounds.  Food there was similar to the first stop.

From there we climbed over a hill near downtown Greenfield, then headed into Turners Falls and along the bike path there.  At the end of the path, I stopped to photograph some swans hanging out in the Connecticut River: 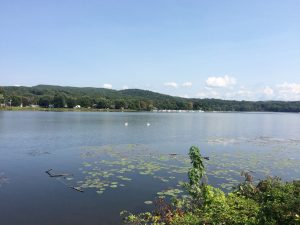 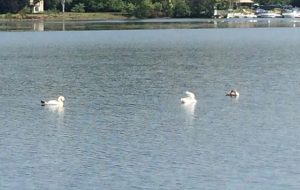 There was another climb after that point, then the ride headed south through Montague and into Sunderland, where the third and final rest stop was located.  This one had more baked goods, but also a few different kinds of fresh fruit, including peaches.  I was excited to have a peach, as they are very refreshing when one is hot and sweaty (there had been bananas available at the other stops – they’re a staple of cycling events – but I don’t like them, myself).

After that, it was a fairly flat 17 miles through Whately and Hatfield to get back to the event beginning in Northampton.  I got there at 3:15, so my total time for 73 miles was 6 hours, 35 minutes.

Next: a full summary of the big century ride.